Continued from Part 1, which you can read here.

Continuing my stroll around the stands at the BEERS 2016 Exhibit in Tel Aviv, I reached the Alexander Brewery, where all the buzz was about their new Milk & Honey, a collaborative dark and sweet beer made jointly with the Mikkeller Brewery in Copenhagen.


Mikkeller is actually a "gypsy brewery," which makes its very innovative beers in different breweries around the world.  Founder and owner Mikkel Borg Bjergso visited the Alexander Brewery a few months ago and worked with owner Ori Sagy.

"We wanted to bring together our two distinct approaches to making beer," says Ori.  "In order to introduce Mikkel to our local colors and flavors, I took him on a tour of the Machane Yehuda market in Jerusalem.  Then the idea hit us – a beer from the land of milk and honey!" 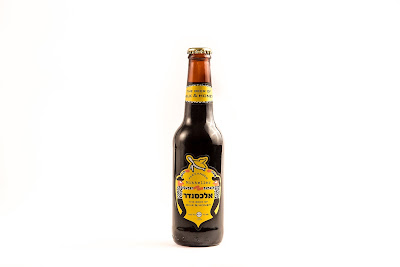 Milk & Honey is a "milk stout" style beer, made with added lactose (milk sugar), honey and grated orange peel.  Alcohol content is a strong 8.4%.  Since lactose is not fermentable by beer yeast, which means the yeast cannot digest it, it stays sweet in the beer and adds body, creaminess – and calories.  In fact, beginning a hundred years ago, milk stouts were believed to be beneficial to nursing mothers because of their nutritious ingredients.

Milk & Honey pours out a dark ruby brown with a thin, tan head.  The aroma is divine: burnt caramel, chocolate and coffee.  The taste is very sweet of malt, caramel, chocolate, vanilla, and some orange which gives a little bitterness to the finish.

Milk & Honey may be too sweet to have alongside food, but it would make a lovely "dessert beer," perhaps with a strong cup of coffee, or something to enjoy just by itself.

Another thing: The label says that this beer is "Dairy" due to the lactose.  However, there are some rabbis who maintain that the production of lactose removes it so far from its milk origins that it is no longer considered dairy.  So, for those who do not eat meat and dairy together, you might want to get your local rabbi's opinion before having this beer with or after a meat meal.

Along with its regular repertoire of beers, Malka Brewery from Kibbutz Yechiam was unveiling their new SMaSH beer -- Single Hop and Single Malt.  I had a chance to talk with Asaf Lavie, who is the owner of the brewery along with his brother Dan.

Asaf told me that the single malt in their SMaSH is Pilsner, and the single hop is Summit.  "We made this beer for the BEERS Exhibit," he said.  "But we will be making other SMaSH beers, each time with a different hop variety.  They probably won't be available in bottles, but only on tap at our own brewpub and elsewhere."  In Jerusalem, Malka SMaSH is now available from the tap at Beerateinu.

The Malka SMaSH I tasted at the Exhibit had plenty of lemon and some grapefruit in the aroma and the flavor.  The balance between the one hop and the one malt was excellent.  It was very carbonated and with medium bitterness.

Asaf also took the opportunity to tell me that Malka Brewery will be moving into new 1,500 square meter facilities next year, giving them the capacity of brewing 40 hectoliters (4,000 liters) of four different beers at one time.

"In July 2016, we produced the same amount of beer as we did in all of 2011," he added proudly.  "But we still have to reach and educate much higher numbers of beer drinkers about craft beer."


Tzor is a home brewery on Moshav Liman (named after the late U.S, Senator Herbert Lehman) in the Western Galilee that has been making beer for six months.  Itai Dahan, the entrepreneur and brewer, told me that he rented a stand at the BEERS Exhibit because he wanted to bring his beers to the public's attention as soon as possible.  "The reactions were excellent," he said.  "It encourages us to continue and to expand."

In the meantime, however, Itai brews by himself ("with the encouragement of my whole family") and his beers are not yet sold in stores or restaurants, only at festivals, of which there are none in sight at the present time.  He makes two beers on a regular basis -- a Pale Ale and a Wheat -- and was also serving an IPA made only for the BEERS Exhibit.

The Pale Ale is indeed a very pale color, with a reddish hue.  My drinking partner Moshe remarked that it had "a fresh aroma, like the morning dew."  I wouldn't go that far, but I was happy with the flower and fruit aromas, as well as the citrusy and yeasty tastes.  Unfortunately, I felt the bitterness overpowered those flavors.  Moshe also found the body too thin.  "They should have used less liquid," he commented.

I didn't try the Wheat Beer, but the IPA had a sweet and fruity aroma from the hops.  The flavor was moderately bitter with notes of citrus and malt.  I noted that I was not too impressed.  I've come to expect more defined and bold flavors in my IPAs.

So, good luck to Itai and his Tzor Beer.  I congratulate him on his courage to plunge so soon into the world of public beer events, but there is room for learning and improvement.

At the home-brewers table, I had the chance to taste three beers, and as (my) luck would have it, they all went on to win first place in their categories (one was even Best-in-Show!) in the Sam Adams Longshot home-brewers competition, whose winners were announced on the last night of the BEERS Exhibit.

Yonatan Bendett from Ramat Gan was serving his Stout beer. which won the gold in the Dark Ale category.  It was a good classic stout.

Nearby, newlyweds Shai and Lilach Nutman from Hadera were pouring their home-brew, which they call King's Beer.  I tasted the Wheat Beer, which won first-place in that category.  It was a very fruity wheat with a strong 6.7% alcoholic content.

Next over was Adam Souriano from Yehud, who has been brewing his Joya-labeled beers for around five years.  Adam is also one of the first of a small number of Israelis who are experimenting with growing their own hops.

I tasted the Joya Dragon's Kiss, a big and beautiful Russian imperial stout made with cacao nibs (fermented, dried, roasted and crushed cacao beans), Ancho chili peppers and fresh coconut.  It is aged one year in oak barrels and has an ABV of 12.8%, very close to wine.  All those flavors are noticeable: The roasted chocolate and coconut are delicious together, and you feel the chilies in your throat on the way down.  Other taste notes include vanilla, dark fruits and a slightly salty finish.  Like other extreme beers, this is not to be quaffed lightly.  Enjoy it in sips as you would a good cordial or liqueur.  If you want to pair it with food, choose only dishes with the strongest flavors, or strong cheeses, or dark chocolate desserts.

Some history buffs will tell you that Russian imperial stouts were first brewed in England for shipping to the royal court of the tsar.  They loved this powerful beer in the heart of the Russian winter.  Who wouldn't?  Russian imperial stouts are usually dark red-brown to pitch black, and the malt aromas and tastes are complex, with coffee and dark chocolate often predominating, and perhaps also dark fruits.  The body is very full, with a smooth texture and alcohol warmth.

Dragon's Kiss won first place in the Free-Style category and overall Best-in-Show -- a well-deserved recognition of the skill and dedication of brewer Adam Souriano.  In addition, his George's IPA took third place in the Pale Ale division.

"We used a Russian recipe for our imperial stout," Adam told me, "including Zurich lager yeast because it can survive in an alcohol environment of up to 14%."  (Most other yeasts are killed by the same alcohol they produce at a much lower percentage, and can therefore not be used to brew high-alcoholic beers like imperial stouts.)

Unfortunately, you can't buy Dragon's Kiss, or any other Joya beer for that matter, anywhere.  Adam only brews his beers for family and friends, and the occasional festival.

"However," he added, "these awards in the Sam Adams Longshot competition encouraged me to think about going commercial.  My heart is close to beer, but my profession now is film-making and, to tell the truth, it includes a work schedule which doesn't sit well with brewing.  I would have to choose.  We'll have to see."

I leave the choice to Adam, but I have no doubt that Joya Beers on the market would be a marvelous addition to the Israeli craft beer scene.
Posted by Doug Greener at Monday, November 14, 2016