Proving you can't have too much of a good thing, or if it works, don't fix it, the organizers of the Jerusalem Craft Beer Fair are holding their autumn edition this week, Wednesday, November 2, and Thursday, November 3.  The first Fair was held last July in the same location, the First Station, the old Turkish railroad station on David Remez Street.  You can't beat that for ambiance, convenience, and good restaurants all around you.

The Fair opens at 6:00 p.m. and entrance is free.  The beer will be sold at "discounted" prices for tastes and full glasses.  Brewing lessons and demonstrations will be held throughout the event.  Organizer Shmuel Naky of Birateinu, the Jerusalem Beer Center (which is sponsoring the Fair), says that new winter beers will be unveiled for the first time -- something that has me very interested.

The following craft breweries will be selling their beers:

I enjoyed it the first time -- small, intense, and lots of good beers a few steps away from each other -- and I hope this fledging tradition will continue.  Even though the possibility of rain is being predicted for Wednesday night, I plan to be there.  Hope to see you too!
Posted by Doug Greener at Monday, October 31, 2016 No comments: 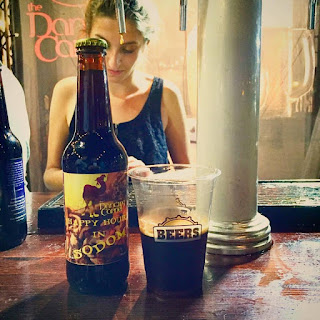 The 2016 Jerusalem Beer Festival: Fun, but not much new

I should really write about the 2016 Jerusalem Beer Festival, which took place this year as August met September.  After all, it is on my home turf.  Impresario Eli Giladi and his team of organizers are efficient, courteous, welcoming, and treat me like semi-royalty.  I run into a lot of friends and neighbors, and the ambiance is redolent with beer and good times.

Yes, for the average beer drinker who is hopefully taking his or her first steps towards appreciating craft beer, this is a great event.  Even though Big Beer, both Israeli-brewed and imported, is conspicuously represented, there are also many stands of local micro-brewers where you can get generous tastes and patient explanations on what craft beer is all about.

But for your somewhat jaded old blogger, there was almost nothing new.  Most of the major craft breweries that I -- and hopefully also you -- know and love were there, serving there regular line of beers.  It's always a pleasure for me to meet the brewers and take a picture with them -- but is that something I should be writing about?

With my 20/20 (or 6/6) hindsight, I can see now that what the brewers did was wait a few weeks and unveil their new beers at the BEERS 2016 Exhibit in Tel Aviv -- of which you'll read more about at a later date.

But getting back to Jerusalem, there were a few new, or renewed, beers that I was able to find.  For example, Almost 10, a strong, dark Belgian-style ale from Gilad Ne-Eman of the HeChalutz ("The Pioneer") Brewery in Beersheva (which I already wrote about here).  Don't look for Almost 10 in your favorite liquor store.  It was made for this festival, and I guess for other such events as well.

Yochai Maytal of HeChatzer Brewery ("Back Yard Beer") in Ra'anana was serving his re-issued Kruzo, an American pale ale made with barley and wheat malts and mango puree.  The beer is named after Robinson Crusoe (who presumably ate mangoes on his deserted island), but the brewers chose to spell the English name differently.  HeChatzer uses the facilities of the Srigim Brewery to make this beer in commercial quantities.

Kruzo hasn't been on the shelves for about two years, and it's return is welcomed back.  I love the taste of mango, but to tell the truth, I couldn't find it in this beer, nor could my astute drinking companion Moshe.  What we did get were grassy and tropical fruit aromas.  The fruits are also in the taste, dominated by guava.  Quite flavorful, but not really the mango I was looking for.  Perhaps it's the mango that adds a sweet counter-balance to the plentiful amounts of Citra and Magnum hops which are used in this beer.

Even without a strong mango presence, this is a delicious beer, light and refreshing (5.3% alcohol), perfect for a summer's day, by itself or with food.  Any spicy dishes, or light desserts which would go well with some added fruit flavor -- like pancakes, cheesecake and mild cheeses -- would be nicely complemented (and complimented) by Kruzo.


Another newcomer was a Rye IPA from the Golan Brewery in Katzrin.  This beer was also made only for festivals, but Golan Brewery head Moti Bar told me that it may be made available to the public at a later date under their specialty Og label.

This Rye IPA pours out a dark amber color with aromas of spice and caramel.  You can taste the spicy rye, which I appreciate, along with pine and sweet malt, but I wonder why they call this an IPA.  It simply does not have the hop presence and bitterness associated with this style.  Still in all, an enjoyable drink. There are not too many Israeli beers made with rye malt.

I'm sorry you have to look at the old blogger in every one of the photos here, but I think you can tell that I was having a good time.  Maybe at the next Jerusalem Beer Festival, some of the brewers will choose to unveil their new beers.
Posted by Doug Greener at Wednesday, October 05, 2016 2 comments: