A few more notices about beer events and festivals have crossed my desk, and I hasten to share them with you all.  I am quite exhilarated to learn of all the local events, something which was simply not happening even two or three years ago.  Now, beer lovers in different parts of the country have the opportunity to be with others of their kind in an atmosphere of booze, victuals, music and frivolity.  Somethings do get better, if only for a short while. 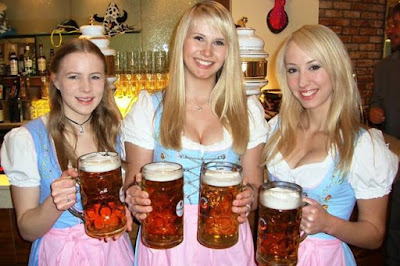 Taking place in the beautiful Sarona Market shopping mall in Tel Aviv, this yet-another-namesake of the famous German Oktoberfest will beheld September 14-15, Wednesday and Thursday, 7:00 to 11:00 pm, and Friday, September 16, noon until the start of Shabbat.

The organizers promise a real Bavarian beer party, with wooden benches and tables, beer served in giant mugs, traditional Bavarian delicacies and, best of all, waitresses in their dirndls.  Background music with a beat will complete the scene.  Entrance is free.

It's a good thing no one can put a copyright on the word "Oktoberfest," because yet another one is coming to the city of Rehovot, Wednesday, September 21 and Thursday, September 22.  It will take place in the Science Park - Pakaris parking lot.  Admission is free and open to the public from 6:00 p.m. until 8:30 p.m.  After that, you have to be over 18.

All of the beer will be imported from the famous Paulaner Brewery in Germany, and will be served along with traditional Bavarian dishes.  In addition. there will be live music and entertainment, and an area for games and activities.  Don't expect Israeli craft beers.

If you can wait until the Sukkot holiday, there's going to be a more Israeli beer festival at the Emek Hefer Industrial Park, October 17-19 (Monday-Wednesday), in Hangar 09.  The doors open every evening at 5:00 p.m.  Admission is free, but you have to be over 18.


Along with the customary food and entertainment, the organizers promise a "large number" of craft beers from Israel and abroad.  Now that's more like it.
Posted by Doug Greener at Saturday, September 10, 2016