Okay, this is it.  My last mention of "Oktoberfests" in Israel.  For years, we were having our own beer festivals without having to copy the name and the style of the German prototype, however attractive it may be.  And, by the way, for several years, the native Münchner and the tourists have been complaining that the Munich Oktoberfest, which is now underway, has become horribly overcrowded, ridiculously expensive, and marred by drunken loutish behavior. 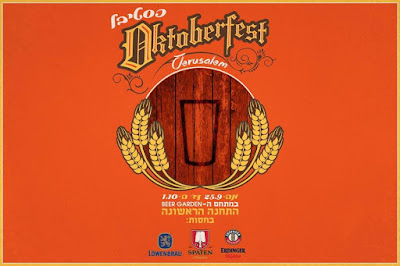 Having said this, the Beer Garden in Jerusalem (first mentioned here) is holding its own week-long Oktoberfest from September 25 to October 1, opening every day at 3:00 p.m.  It's a natural setting, since Oktoberfests have traditionally been held in beer gardens, or under big tents anyway.  This one is located in the First Station, the refurbished old Ottoman-era train station.

Although the Beer Garden will have all of its regular beers on tap, the Oktoberfest is sponsored by the three Bavarian brewers of Lowenbrau, Erdinger and Spaten.  Whoever buys three 400 ml. glasses of these beers will get an (empty) one liter glass as a gift.  Other beer glassware will also be on sale.

In addition to the pub grub available at the Beer Garden, there will be free snacks on every table.  Admission is free.

The Eastern Fairgrounds (Yareed HaMizrach) near the Tel Aviv Port will be the site of another Oktoberfest on Tuesday, September 27, and Wednesday, September 28.  This one is sponsored by Weihenstephan, the giant Bavarian state-owned brewery, reportedly the oldest still-operating brewery in the world!  This is certainly impressive, but it also means that you shouldn't expect to drink any craft beers at this party.  There will be the usual Bavarian delicacies and live music.  Doors open at 6:00 p.m. and admission is free.

The Herliya Pituach Oktoberfest will be held October 5 and 6 on the rooftop of the Business Park (Azrieli Outlet Center) at 85 Medinat Hayehudim Street.

This one seems to be organized by the same company that organized last week's Rehovot Oktoberfest, since the logo and all the features are the same: An alcohol area with German beers and Bavarian food (restricted to those over 18) and a gaming and activities area for the whole family.  Live German music, which I guess means the polka, will also fill the air.
Admission is free and open to the public until 8:30 p.m.; after that, only to those over 18.

Here again, don't expect any craft beers, since the event is sponsored by the giant Paulaner Brewery in Munich.

Something a little different will take place on Thursday, October 20, at the Alexander Brewery in the Emek Hefer Industrial Area, 19 Zvi Hanachal Street.

They're calling this the "Alexanderfest" and the entire street in front of the brewery will be closed off and turned into a giant beer garden at 5:00 p.m.  The regular line of Alexander Beers will be served, priced at 35 shekels for a half-liter -- and you get to keep the glass.  Refills are only 15 shekels.  Bottles of Alexander Beer for bringing home will be sold at special prices.  There will be stands for hot dogs and other food, as well as performances of live music, Israeli not German.

Entrance is free to children under 12 accompanies by their parents.  But if you're older than that, you have to pay 40 shekels.  Since the number of places is limited, Alexander founder and owner Ori Sagy suggests you buy tickets online at a special Headstart site.  For details, go to https://www.headstart.co.il/project.aspx?id=15997&lan=he-IL  (It's in Hebrew.)

At least the Alexanderfest has Israeli craft beer as its main attraction, rather than foreign imports.  Nevertheless, even the several imported Oktoberfests that are taking place around the country offer a pleasant day or evening out with beer, food, music and Gemütlichkeit.  Maybe we can even keep them more attractive and less vulgar than the original.