Discount coupon to this week's BEERS 2016 Exhibit in Tel Aviv 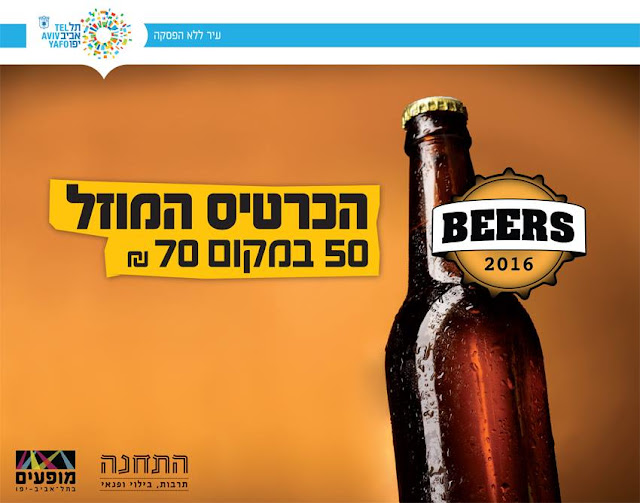 The monumental BEERS 2016 Exhibit takes place this week, Tuesday, September 20, to Thursday, September 22, at the Train Station (HaTachana) in Tel Aviv's Neve Tzedek neighborhood.  It opens every day at 6:00 p.m.

It's by far the biggest celebration of beer in Israel.  Over 200 beers will be available, including a slew of new beers from Israeli micro-brewers and new imported beers.  Of course, there's food and entertainment -- but beer is definitely on center stage here.  To tease our senses, the organizers are promising a cannabis beer, an Israeli-Danish collaboration beer, a beer made with Scotch whisky, Palestinian beer, beers made just for this exhibit, micro-breweries displaying their wares for the first time, and a whopping number of new India pale ales -- apparently now becoming the most popular beer style in Israel, as it is in many other countries.

You get the picture.  If you're anywhere in Israel and you love beer, it's probably worth the trip to Tel Aviv.

Regular admission is 70 shekels, but you can get a discount coupon which will get you in for only 50 shekels.  You have to act by the end of tomorrow, Monday, September 19, to you get your discount coupon.  Here's what you have to do:  Go to the BEERS Facebook page at

and share the coupon (that's what it looks like above) with your Facebook friends.  When you get to the BEERS ticket office, show them your shared post on your smartphone.  (Yeah, I'm afraid you have to have one of those.  If you don't, maybe you can use a friend's, but it should be on your Facebook page.)  That should work to get you the 20 shekel discount.

I'm going on Tuesday, the 20th.  If you see me, please step up and say hello.  I love it when a plan comes together.
Posted by Doug Greener at Sunday, September 18, 2016