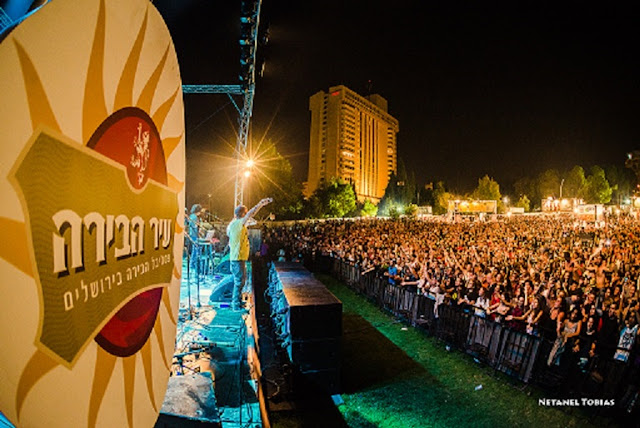 Here is a reminder for all Jerusalemites and all those who say there's nothing to do in our capital city, that the 12th Jerusalem Beer Festival, the "Ir HaBira," will be held this coming Wednesday and Thursday, August 31 and September 1, in Independence Park (Gan Ha'atzmaut), beginning at 6:00 p.m.

Impresario Eli Giladi told me that 120 different beers will be pumped and poured during the festival: craft beers and mass-brewed beers from Israel, as well as imported beers from the U.S., Europe and Asia.  "A number of new beers will also have their premiers at the Festival," Eli added.

As usual, there will be food stands and musical entertainment on both nights from well-known bands.  Regular tickets are 45 shekels.  For soldiers, students, people doing National Service, and holders of the "Yerushalmi" card, the price is 35 shekels.  Find more information on the Festival's English website here.

Other than the beer, of course, the thing I love most about the Jerusalem Beer Festival is the great ambiance which is generated.  The beautiful (cool) Jerusalem evenings, the ever-friendlier-as-the-night-goes-on people, the beer, the food, the music -- all come together to make this a most enjoyable event.  Can't explain it really, you have to be in the middle of it.

I plan on being there Wednesday evening.  If you see me, come over and say hello.  Tell me how much you love my blog -- or not.
Posted by Doug Greener at Sunday, August 28, 2016