The craft beer renaissance in Israel just celebrated its tenth anniversary.  And, not coincidentally, so did the Dancing Camel Brewery in Tel Aviv.  It was the Dancing Camel in 2006, under the guiding hand of David Cohen, that fired the first salvo against industrial beer in Israel.

Today, 10 years later, there are about 25-30 boutique breweries in Israel that sell their beer on a legitimate commercial basis, that is, not just to friends and neighbors or to neighborhood pubs, but to the general public via pubs and restaurants, beer stores and other bottle shops.

David Cohen, like so many other movers and shakers, started out in Brooklyn, New York.  That was also where he began home-brewing in 1988, while working as an accountant and watching the craft beer revolution unfolding around him.

"I got my first hands-on commercial experience in brewing while working as a volunteer in a small craft brewery in New Jersey," explains David.  “My aliyah plans were already underway and I knew I didn’t want to continue being an accountant in Israel. What started as a 'Wouldn’t it be cool if...' moment, really began to take shape working in a commercial brewery.  I would not have had the confidence to go from brewing 40 liters to 1,200 liters per batch without that experience.”

David made aliyah in 2003, ditched any thoughts about continuing to work as an accountant, and began making plans for opening up a brewpub in Tel Aviv.

"The bureaucrats involved in new businesses had no idea what we were talking about," David continues.  "We had to educate them about what we wanted every step of the way.  Their attitudes varied from mild entertainment to abrasive and adversarial." 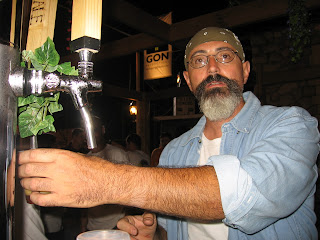 Nevertheless, David outlasted the bureaucracy and opened the Dancing Camel brewery and pub in 2006.  He chose the name based on a legend concerning Rabbi Israel Najara, who was saved from bandits by a ring of dancing camels which protected him.  I can see where David might have felt he needed the same protection from the enveloping red tape.

But for the young Tel Aviv crowd who needed a place to drink quality craft beer just like their counterparts in the U.S. and Europe, the Dancing Camel was a godsend.  It soon attracted a band of loyal customers, some coming from other cities as well.

The Dancing Camel also broke the ice for other brewers in Israel to follow suit.  In short order, micro-breweries were opening in other places: Bazelet on the Golan Heights, Malka on Kibbutz Yechiam, Negev in Kiryat Gat, Shapiro and Mosco in Beit Shemesh, Alexander in Emek Hefer, Srigim on Kibbutz Srigim (Li-On), Herzl in Jerusalem, and others.

"My fear," admits David, "was that some new breweries would be putting bad beer on the market, and actually damage the reputation of craft beer, rather than enhance it.

"Happily, that hasn't been the case.  Most of the craft brewers in Israel have a passion for brewing beer and the quality of their beers shows it.  After 10 years, we can hold our heads high in any market in the U.S. -- and that's where the craft beer revolution began and still gets its inspiration."

David also had to face a reaction from other brewers that was unexpected.

"In the U.S.," he explained to me, "the relationship between craft brewers is collegial.  They’re colleagues first and competitors second. Here, at the beginning, there was a bit more of an Israeli 'street-fight' feel to it.

"But very quickly, the natural comradery of the craft beer culture took root and today I think that all the brewers understand that we're in this together, that everybody benefits when more people become acquainted with craft beer."

Even with the remarkable growth of craft breweries and brewers since David started Dancing Camel 10 years ago, he doesn't believe that the Israeli market is saturated.

"There is plenty of room for growth," he declares.  "In fact, the only place you have excitement and growth in the beer industry is in micro-breweries.  Look, Israel is among the lowest per capita beer drinking countries -- 14 liters a year.  But even if this goes up to 16 or 17, largely due to craft beer, that's a very significant increase in total liters.

"People also respect the love that goes into craft beers.  They like the personal touches -- who the brewers are, what are the local and Israeli connections to the beer.  Behind every microbrewery, stands an individual with a dream, a passion and the determination to make that dream a reality. It’s a very powerful message.  But of course, in the end, the customers stay for the taste.  Once you taste craft beer, you can never go back to industrial lagers."

For a little cherry on the cream of the 10th anniversary, David revealed that the Dancing Camel is working on collaboration beers with no less than three German breweries.

"What is interesting," explains David, not doing a very good job concealing his emotion, "is that these breweries approached the Dancing Camel to collaborate with them. 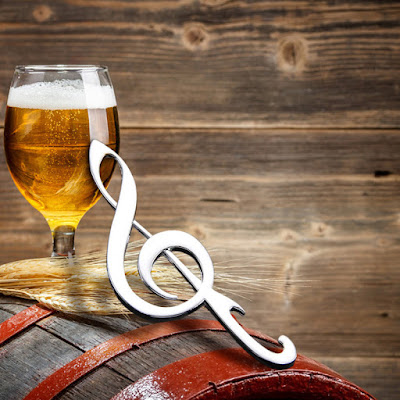 "Now, I believe in collaboration beers.  It's exciting when brewers combine their talents to make something new; like different musicians who get together for a jam – that’s when the magic happens.”

For each collaboration, David is contributing an "Israeli" ingredient to the beer.  True, this would make the final product at odds with the 500-year-old German beer purity law, the Reinheitsgebot, which dictates that beer can only be made with water, hops, malted grain and yeast.  This means that the resulting brew cannot be marketed as "bier" in Germany, but David and the three breweries are prepared to accept that in order to cook up beers which contain a part of Israel.

(In April the first German-Israeli collaboration beers was unveiled in Munich, a product of Herzl Beer in Jerusalem and the Crew Republic Brewery near Munich.  This beer was brewed according the Reinheitsgebot rules.  Read more about that here.)

The idea to invite the Dancing Camel to work with a German brewery was first raised by Dr. Dan Shaham, the Israeli Consul General in Munich.  He made the connection with the Bräukatz ("Brew Cats") Brewery in Nesselwang in the Allgau region of southern Germany, run by two sisters, Kathrin and Stephanie Meyer.  David met with them twice during the spring in Germany, where they brewed a trial batch of the beer.  He returned at the end of July for the brewing, and the beer should be ready in September.

For this beer, David brought with him Israeli date honey, or "silan," which was used in the brewing process.  The beer-to-be already has a name: Two Cats on a Camel.

For the second collaboration beer, David went to Berlin to work with Sebastian Mergel and Andre Schabrackentapir of the Bierfabrik ("Beer Factory").  This time, he brought along red-hot Israeli chili peppers to make a spicy beer.  Since the beer style is known as a Munich Helles, a light, crisp lager neither overly bitter nor sweet, the collaborative effort will be called -- get ready for it -- Gates of Helles.

The third collaboration saw David staying in Berlin at the Schoppe Bräu brewery.  He joined owner Thorsten Schoppe with a jar of salt, mined from the Dead Sea by a company named “424."  Together, they brewed up a batch of Salted Caramel Porter, using German malt and Israeli salt.  The result should be something like those salted chocolate/caramel bars, or chocolate-covered salted pretzels, which are so popular.  I know I like the salt-sweet combination and I can't wait to try this beer.  The presumptive name: Liv at the Dead Sea, in honor of Thorsten's newborn daughter.

Talks are also underway to start contract brewing some of the Dancing Camel’s own beers in Berlin, for distribution around Germany. 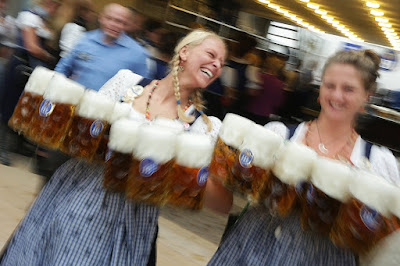 “What’s so exciting about brewing with German craft brewers is that Germany is the final frontier for craft beer.  Nowhere in the world were mass-produced beers as entrenched and steeped in history and tradition as in Germany.  To watch the craft beer revolution roll through Germany shows just how powerful a force it is.  And it speaks volumes about the character of the brewers themselves.  I left inspired.”

So, double congratulations to David Cohen and the Dancing Camel: For their tenth anniversary of brewing excellent craft beers, and for the three collaboration brews which will soon be ready to drink.  David hopes to bring over a keg or two of each of the beers for pumping at the Dancing Camel.  Otherwise, they will probably not be available in Israel, but should give some hardy souls an incentive to visit Berlin and Nesselvang.

We should remember that it was the German brewers who looked to Israel for inspiration for their new beers.  Coming from a country nearly synonymous with brewing and beer for hundreds of years, that probably counts as an accomplishment for all Israeli craft beers on this, our tenth birthday. 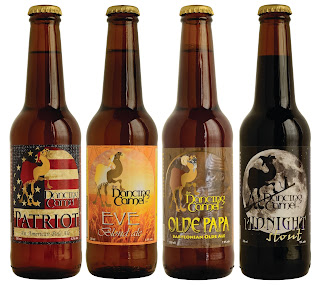 The beers of Dancing Camel

By my count, Dancing Camel has the largest "repertoire" by far of all micro-breweries in Israel.  These include their regular beers, seasonal specialties, and "iced beers" – beers which are partially frozen and the ice crystals removed to increase the alcohol concentration.

Midnight Stout – A black and roasty stout beer, with the typical chocolate and coffee flavor notes you expect.  At a moderate 5% alcohol by volume, it's not too heavy to enjoy even on an Israeli summer day. 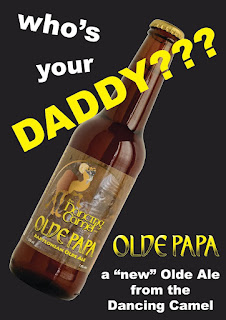 Olde Papa Olde Babylonian Ale – A strong ale (7.5%) in the British tradition.  Named after Rav Papa from the Talmud, who made his beers with date honey, this beer is nicely balanced between bitter and sweet, with tastes of malt and caramel.

Hefe-Wit – A Belgian-style witbier (wheat beer) made with orange and coriander.  With a nice balance of fruity and spicy flavors, this is a light (5%) and refreshing beer for the Israeli summer.

Chailander – A dark-golden Scottish ale with strong malt and floral aromas.  Made with date honey; medium-bitter and strong alcohol (6%).

Leche del Diablo – A 5% wheat beer, made with Israeli chili peppers.  You definitely feel the burn in your throat. (Summer) 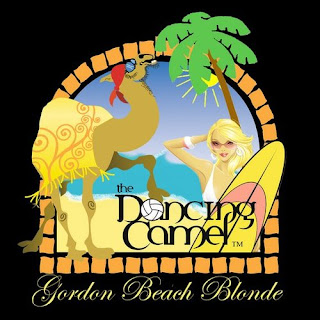 Gordon Beach Blond – A light (4.9%) and refreshing blond ale, brewed with mint and rosemary, which add sparkling touches to the flavor.  (Summer)

613 – A 5.5% pomegranate ale, brewed for the Rosh Hashana holiday season.  The pomegranate is traditionally believed to have 613 seeds, corresponding to the number of mitzvot (commandments) in the Torah.

'Trog Wit – A Belgian-style witbier, similar to Hefe-Wit (5%), but brewed with Etrog fruit for the Sukkot holiday in the fall.  The Etrog, which is used for the holiday ritual, gives the beer a citrusy, tangy and spicy taste.

Cherry Vanilla Stout – A deep brown, almost black stout, brewed with lots of vanilla and cherries for Hanukkah.  It's supposed to replicate the taste of the traditional jelly donuts, sufganiyot.  Very sweet, as expected, with vanilla the dominant aroma and taste, but also cherry and coffee.  (5% ABV)

Downtown Brown – A brown ale made with caramelized malt, cinnamon, ginger, nutmeg and allspice.  Brewed in the fall and winter, this is the Dancing Camel's traditional winter-holiday ale, strong (6%) and spicy, with tastes of chocolate, pepper, coffee and licorice. 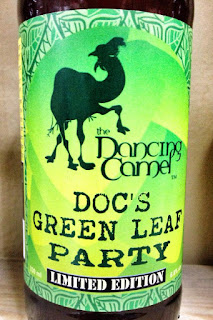 Carobbean Stout – Another winter ale, brewed with Israeli carobs which impart a chocolate flavor.  This close-to-black stout is strong (7.2%), with flavors of fruit, spice and caramel.  An excellent beer for the cold days and nights.

Doc's Green Leaf Party IPA – A beautifully refreshing American-style India pale ale, full of citrus inducing hops from California and Australia.  The hop taste is fruity, herbal and suitably bitter, and the ABV is a hefty 6.8%.  Named in memory of Dr. Don Morris of California, who was a friend a business associate of David Cohen.  Rated by the website Ratebeer.com as Israel's Number 1 beer since 2014. Foxy Cleopatra – Based on Downtown Brown, 11%