I found myself in southern Florida once again on a melancholy trip to visit my mother.  She is not doing too well.  Within spitting distance of her first century, she suffered two falls in the last several months which have left her bedridden.  She is moved from the bed to the wheelchair and back again.  She can be pushed outside to sit in the Florida sunshine, and to the table to eat with others.  But her feet cannot support her.

Nevertheless, she finds enjoyment in her life from being around family and friends (including her devoted caregivers), reading, watching TV, and eating the kinds and quantities of food that she likes.

So it was that I didn't feel especially guilty when my son Ami came to visit us from Washington, DC, and we went out together to drink some beer.

Ami chose the World of Beer branch in Coconut Creek,  WOB is a multi-state chain of over 60 beer "taverns."  The Coconut Creek branch has about 40 beers on tap which are rotated daily!  Quite a piece of work!  In addition, there are hundreds of other bottles and cans of beer on ice and on display.  This is America, where bigger is better.


The printed menu for draft beers on the day we were there was clearly dated.  The beers were grouped into plain English categories, which I greatly appreciated: Light & Crisp, Wheat-Weiss-Wit, Hop Forward (the largest), Malt Forward, Dark & Bold, Belgian & Belgian Influenced, Sours, Cider & Fruit, Specialty, and Old School (a nice way to say mass-brewed pale lagers).

Since I like to travel globally and drink locally, I asked the bartender and shift manger, Eric Riggins, for a four-beer flight of Florida beers on draft.  He gave me:

White Wizard -- a Belgian-style wheat beer from Barrel of Monks Brewery in Boynton Beach.  5.5% alcohol by volume.
Floridian -- a classic weizen from Funky Buddha Brewery in Oakland Park (near Fort Lauderdale).  5.6% ABV.
Pompano Lager -- a "Pompano-style lager" (which I guess it is) from 26 Degrees Brewing Co. in Pompano Beach.  5.5% ABV.
Koffie Saison  -- a coffee-infused saison from Band of Monks Brewery.  6.5% ABV.

After the four-beer flight, Ami and I were still thirsty, so he ordered the Inti Cancha Berliner Weisse from Darwin Brewing Co. in Bradenton, Florida.  This was Ami's first taste of a sour beer and he was enthusiastic.  Darwin calls the beer a "Floridaweisse" (which I guess it is), and they make it with organic starfruit, a sour exotic fruit that grows with five ridges, so the slices look like little stars.  It was a weak 3.9% ABV and a lot less sour than other lambics and Berliner Weisses I have tried.  I'd call it a "half-sour" in honor of the famous New York pickles.  Ami paired it with a black bean patty.

I had the Rebirth Pale Ale (5%) from NOLA Brewery in New Orleans, an American pale ale made with multi-malts and multi-hops.  I was looking forward to something less hoppy than all the IPAs I was trying in Florida, but this NOLA APA was no different.  Still, it went very well with my hummus and corn chips.

Afterwards, I went back to speak with Eric Riggins, who had been at his job for four years.  Eric started out as a bartender, fell in love with the whole craft beer scene, and worked his way up to manager.  "Beer has become my passion," Eric enthused.  "I'm taking a course now for $650 to become a cicerone, a beer sommelier.  It's good to have a title.  My homework is drinking.  I can think of much worse alternatives."  Well said, Eric.

Ami noticed that one of our waitresses had some interesting tattoos on her inner thigh and they started chatting.  Her name was Danielle Bushey and she was excited to hear that we were from Israel since she was planning to visit on an upcoming Birthright trip.

Danielle brought us over a complimentary pint of Cali Creamin' Vanilla Cream Ale from Mother Earth Brew Co. in California.  Even though Ami and I were getting beer bloated, we couldn't resist this delicious beer.  Made with flaked corn and honey malt, it tasted like an American cream soda with hops, a malt backbone and an alcoholic kick (5.2%).  The strongest aroma and flavor, of course, was vanilla, which I prejudicially love,

We said good-bye to Eric, shalom to Danielle, and thanked the World of Beer for a most enjoyable American beer experience.

During my stay in Florida, I tasted around 10 other American craft beers.  Here they are, very briefly (in order of appearance):

Goose Honkers Ale -- An English-style bitter from the Goose Island Beer Co., established in Chicago, but now brewed elsewhere.  An easy-drinking beer, well balanced between fruity hops and malt.  Alcohol by volume is 4.3%, 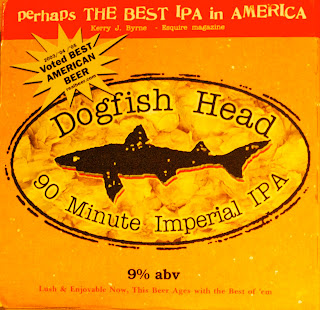 90 Minute Imperial IPA -- From Dogfish Head Brewings and Eats in Milton, Delaware.  One of America's most popular IPAs, it is continually hopped during brewing and then dry-hopped.  Even though the citrus and fruit flavors are powerful, I found that they were even surpassed by the bready-caramel tastes of the malt.  A strong beer (9%), but well-balanced.

420 Extra Pale Ale -- From the Sweet Water Brewing Co. in Atlanta, Georgia.  A West Coast style pale ale, 5.7% ABV.  The hops gave their bitterness, but without much added flavor.

Milk Stout -- From the Left Hand Brewing Co. in Longmont, Colorado.  A 6% alcohol beer made with lactose and flaked oats.  A smooth and sweet beer, with tastes of roasted malt and coffee.  Surprisingly went very well with my spicy Indian wrap. 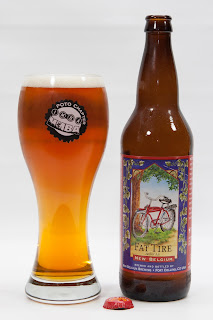 Fat Tire Amber Ale -- From the New Belgium Brewery in Fort Collins, Colorado.  After a surfeit of pale ales and IPAs, I enjoyed this beer's balance of toasted malt, caramel and hop sharpness.  5.2% ABV.

Island Citrus Ale -- From the Islamorada Beer Co. on Islamorada in the Florida Keys.  Brewed with "natural citrus flavors," this is a 5% ABV mildly hoppy very pale ale.  Unfortunately, you don't get much a citrus taste, only a flavorless hop bitterness.  A shame, since the idea of a refreshing and citrusy ale for the Florida summer (and winter!) is a natural.

Organic Amber Ale -- From the Peak Organic Brewing Co. in Portland, Maine.  Beautiful amber-red color with a very creamy head.  Bready aroma and low hop bitterness.  Began to taste sour while having it with my semi-spicy pasta.  It's beers like this that are making me much more appreciative of amber ales.

Sierra Nevada Pale Ale -- From the Sierra Nevada Brewing Co., Chico, California & Mills River, North Carolina.  Whole cone Cascade hops give this 5.6% beer plenty of pine and citrus.  Also some fruit flavors; dry and bitter at the end.  This is a classic American pale ale, a pleasure to drink. 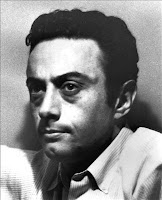 And finally, a beer from Shmaltz Brewing Co. in Clifton Park, New York.  Shmaltz's HE'BREW branded beers have become a legend in the U.S. for their Jewish association and shtik which founder-owner Jeremy Cowan actively encourages.  Cowan is also a big fan of the late and controversial comedian Lenny Bruce (1925-1966) and he created and named a beer in his memory.

Bittersweet Lenny's R.I.P.A. Rye Double IPA -- Wow!  There probably isn't another beer like this.  It's sui generis; also hop-generous and malt-generous.  Since Lenny Bruce reveled in obscenity, the label of this beer says it's "brewed with an obscene amount of hops and malts" -- eight malts, to be exact (including three from rye), seven hops and three in the dry-hopping, and has an ABV of 10%. 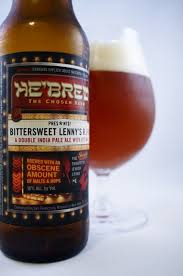 A reddish-maroon color with a beige head, Bittersweet Lenny's has a strong chocolate-hop aroma with tropical fruit and some pine.  The hop bitterness is so strong that it threatens to overpower the other flavors, which are grapefruit, brown sugar and rye spice.  Yet, a balance is maintained by the just-as-strong malt.  I chose to have this beer with a pasta dish including broccoli, asparagus, mushrooms and peppers, and it was excellent.  It also provided a satisfying contrast to my sweet dessert, dark chocolate with acai and blueberry flavors.

This was a wonderful, memorable beer which takes IPA-ness to new heights.  A good way to end my American trip, and leave me wanting to come back for more.