More beer festivals in Israel keep coming to my attention, and I want to turn around and get the word out as fast as I can.

And not a minute too soon!  Already tomorrow, Tuesday, July 26, and Wednesday, July 27, the Kfar Saba Beer Festival is taking place in The Courtyard of the shuk (market), between 7:00 pm and midnight.  Twenty kinds of Israeli beers will be served, including Jem's, Malka, Srigim (Ronen and Emek Ha'ela), Mosco, Fass, Goldstar Unfiltered, as well as Buster's Ciders.

Each evening, there will be performances by Israeli bands.  Entrance to the festival is free.

On the first evening, July 26, there will be a workshop on home-brewing led by Gadi Deviri of the Beer-D Center.  This is not free.  To register for the workshop, call 09-773-3055 or e-mail michalbs@gipm.co.il 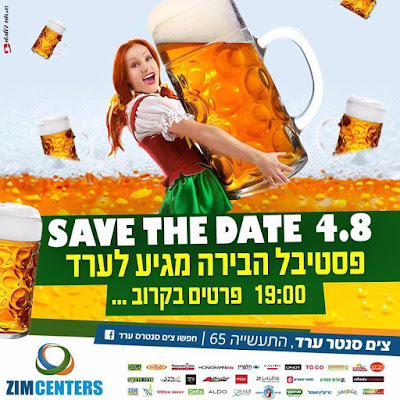 Around a week later, "Beer in the Heart of the Desert," the first beer festival in Arad, opens on August 4 at the Zim Center.  Entrance is free, and you have to be over 18.  There will be stands for "southern brewers" and other well-known Israeli beers, in addition to musical performances by young Israeli groups.  The organizer, who has worked very hard to get this together and bring a beer festival to Israel's north-eastern Negev, is Uriel Elhayani, and he can be reached at 054-683-5634.

It seems as if we're approaching a situation where, instead of you have to get up and go to a beer festival, you can just wait and a beer festival will come to you!
Posted by Doug Greener at Monday, July 25, 2016