One of the simple pleasures of the summertime is sitting outdoors with friends and family, eating and drinking beer together, while all around you hundreds, perhaps thousands, of others are doing the same.  After the sun sets, overhead lights and candles on the table provide just enough light to see those sitting near you and what's on your plate.  All around is lively conversation, sometimes broken by laughter and even singing.

Such are the joys of a beer garden, an institution begun in Bavaria in the 19th century, but now a part of life throughout southern Germany and in other countries as well.

Eventually, they say, everything arrives in Jerusalem – and now's the time for a beer garden.

The Jerusalem Beer Garden opened a few months ago at the First Train Station, the old Turkish railroad station at 4 David Remez Street.  The wooden tables, the lights, the beer, the food, and the music – all are there.  There's even a big outdoor screen to watch sporting events, something I don't think you'll find in European beer gardens.

"We're open every day from around 2:00 p.m. to around midnight," says manager Moshe Mor, whom everybody calls by his nickname, Roger.  "Every Tuesday evening, we have live music and a sing-along, which is very popular.

"Our aim is to make beer as ubiquitous as coffee is today, where it's available everywhere you look and sit down.  Actually, our weather here is more suitable for beer than in Europe, where summers are much shorter."


Mor also reminds me that the Jerusalem Beer Garden, like its European antecedents, will be closed for the winter.  "Our plan is to shut down in October," he says.  "That's long after German beer gardens have closed." 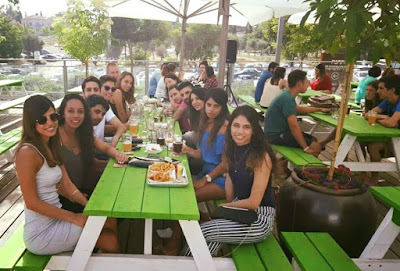 Some of the smaller beer gardens, at least in Munich (where there are about 180), bring their tables indoors for the winter and continue to serve.  They may also put out heaters for the guests, but this ends as soon as the first snow arrives.  For the larger beer gardens – and there are some in Munich which can sit 7,000 - 8,000 people! – practices such as these would be logistical nightmares so they simply close for the winter.

The Jerusalem Beer Garden has 15 rotating taps for beers, a pretty impressive number by Israeli standards.  Most of them are for imported European beers, but when I was there, they also had Herzl craft beer from Jerusalem (Mor is a partner in that brewery), Bazelet beer from the Golan Brewery in Katzrin, Shapiro beer from Beit Shemesh, and Alexander beer from Emek Hefer.  The price for a 400 milliliter glass of beer ranges from 19 to 29 shekels.  There is a small bar for other alcoholic drinks.

The food menu is compact, but just right for a beer garden.  There's the usual burger, sausage, chicken wings and fries – but also a delicious Portobello mushroom burger known as "Meat is Murder."

Although the food served is kosher-meat, the Beer Garden has no certification since it is open on Shabbat.

Before he opened up his own, Mor delved into the history of beer gardens.  "Did you know," he asked me rhetorically, "that in the 19th century, beer brewers in Munich began to brew their beer outside of the city, along the banks of the Isar River?  This was because explosions sometimes occurred in breweries and the authorities didn’t want this happening inside the city.

"Also, beer had to be brewed during the cold months and kept cool for serving in the summer.  The brewers dug cellars along the river to keep the beer cold, put gravel on the top as further insulation, and planted lots of leafy chestnut trees to keep the ground temperature even cooler."

It wasn't long before they were putting simple tables and benches right over the cellars and selling their beer on the spot.  When they began to also sell food, however, the smaller restaurants in the city cried unfair competition.  King Maximilian the First of Bavaria issued a compromise ruling which forbade the "beer gardens" from selling food, but which allowed visitors to bring their own victuals. 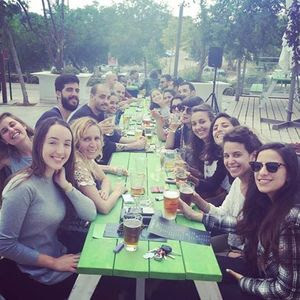 Mor chuckles when I ask him if he allows visitors to the Jerusalem Beer Garden to bring their own food: "Well, our 'traditions' are different in Israel and we can't allow that."

What is the same is the practice of sharing your table with complete strangers.  This often leads to conversations and even new friendships and who knows what else.  From the start, beer gardens were the most democratic of institutions, with professors sitting next to housewives with children, sitting next to army officers, sitting next to workmen.  The common denominator, then as today, is beer.

How much beer you have is a different question.  In Bavarian beer gardens, most people order their beer in "mass" mugs, holding a liter of beer.  Not too unusual in a country where individuals consume on average 116 liters of beer per year.  Here in Israel, where per capita beer consumption is a measly 14 liters a year, the Jerusalem Beer Garden sells it in 400 milliliter glasses.

"That's still a nice quantity of beer," concludes Mor. "We supply you with that and everything else, including what the Germans call Gemütlichkeit, a cozy and relaxed sociability which makes for a real beer garden experience."

The article originally appeared in The Jerusalem Post.
Posted by Doug Greener at Monday, June 27, 2016