It was only a few days ago that I learned that there will be a Craft Beer Fair in Jerusalem on Wednesday, July 20 and Thursday, July 21, at the First Station, the old Turkish railroad station on David Remez Street.  And from what I learned, I don't want to miss it.

Organizer Leon Shvartz, owner of the Glen Whisky Bar, along with Shmuel Naky (his partner at Beerateinu, the Jerusalem Beer Center), came up with the idea of a craft beer fair and are running with it.

"Jerusalem's annual beer festival is very nice," admitted Leon, "but it has come to be dominated by Israel's industrial beer duopoly" -- Tempo Beer Industries (brewers of Goldstar and Maccabee) and Israel Beer Breweries Ltd. (Tuborg and Carlsberg).  "There are stands for some Israeli craft beers, but most of the attendees come to load up on the industrial beers and their foreign imports."

To solve this problem, Leon and Shmuel invited only craft breweries to participate in their Fair, and so far 13 have agreed: 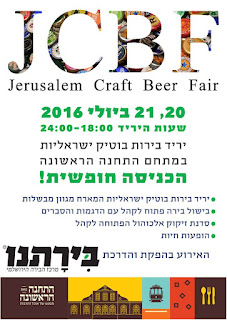 Two or three others may still come on board.

It's interesting to note that The Dictator is making a comeback after more than a year's absence, during which partner Yotam Baras was in charge of sales for the Protary Craft Beers import agency.  "My two partners and I are back to brewing," Yotam told me.  "We'll be serving three beers at the Fair: an American pale ale, an Irish red ale, and a session Bitter, perfect for the Israeli summer."  To add a "shock value," something Yotam has never hesitated to do, each beer label has the picture of a different famous dictator!

The Fair will also be the venue where the very talented home-brewing team of Dvir Flom and Omer Basha from Beersheva are launching their first commercially brewed beer -- a saison, probably named Pushkin.  The beer is being brewed on contract at the Srigim Brewery.  Omer stressed that this is the only commercial beer from Basha-Flom.  "We will stay a full-power home-brewery and continue to create beers that have not been seen before in Israel," he insisted.  However, just to be on the safe side, they recently unveiled a new modern logo.

Getting back to Leon, he told me that all of the booths will be the same size and are being rented for the same price.  "I kept the price low," he insists, "so all the brewers will have a chance to make money at the Fair."

Tastings of 100 milliliters will be sold for 8 shekels, and one-third liter glasses for 20 shekels.
Entrance is free.

"You heard me.  Entrance is free.  And we're having deejay and live music at different times."

Visitors can eat at any of the restaurants in the First Station.  There will be a central booth for buying bottles of beer and beer-related merchandise.

"As you can see, we're introducing several concepts which are new for beer festivals and fairs," concludes Leon.  "If we are successful, we may be holding these fairs more than once a year."

Polina Charnovelsky from the "Cooperation" Office of the Cultural Department of the Haifa Municipality, has just informed me that the Haifa Beer City Festival will be held August 17-18, 2016, at the Agritech Grounds, near the Convention Center. 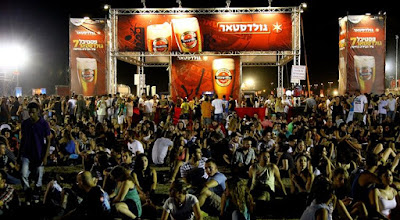 This is one of Israel's major music festivals, attracting tens of thousands of visitors every year with free entrance and entertainment by the country's top rock groups.  It's a place to kick-back, unwind, and enjoy beer, food and great music with friends in a fantastic summer ambiance.

But be warned: This is not the place to experience Israeli craft beers.  The Festival is sponsored by Tempo Beer Industries, and the only beers being served are their own (Goldstar and Maccabee) and the beers they import.
Posted by Doug Greener at Thursday, June 23, 2016