The people have spoken: "We want beer on Passover."

Even before Passover ended, I was getting signals that the kosher-for-Passover Date Ale from the Meadan Brewery was going to be a success. 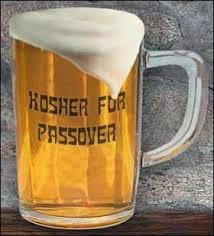 It started at my own Seder holiday meal, when I proudly served bottles of the beer.  Two of my guests who appreciate beer, drank it and proclaimed their admiration.  Hmm.

A day later, I called a friend, one of the judges on our Israel Brews and Views Tasting Panel, and he told me how much he enjoyed the beer at his own Seder.  But even more significant: His son who dislikes beer intensely, took a hesitant sip and screwed up his face: "Ugh!  This is terrible.  It tastes just like beer!"  Could there be a more heartfelt, back-handed compliment?

Now, I have already written (here) my opinion that the taste of Meadan Date Ale is compromised by the lack of malted grain.  However, since grain would make this beer unfit for Passover, it was difficult for me to envision a happy solution.

But, if I am an anything, I am deferential to the voice of the people.  And the people were telling me, they like this beer!

During Passover, we went out to eat in a restaurant that had a chalkboard by the door: "Meadan Date Ale - Kosher for Passover."  Well, here was a chance to have more beer, so we sat down, ordered our food and beer, and the waiter said: "Oh, we ran out of that beer on the first day.  We ordered some more from our distributor, but he also didn't have any left."  Hmm. 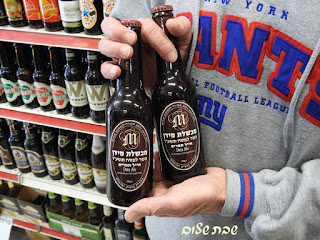 Then, just before the last days of Passover, I went to one of my favorite liquor stores in Jerusalem, Hamisameach near the Machane Yehuda market, to buy some more of the Date Ale.  When I got there, there were two bottles left in a cut open carton.  "Are there any more?", I asked.  "No, that's the last of it," the salesman answered.  "I think we had 30 cartons and they're all gone."

Meanwhile, at the brewery in Carmiel, owner Bryan Meadan was able to feel in macro what I was hearing in the field.

"Almost all of our 40,000 bottles were sold out," Bryan told me.  "People visited our brewery and bought our beer all of Passover week, and the feedback was very positive.

"Unfortunately, stores and distributors ran out of our beer and we didn't have enough to re-supply them."

Bryan hopes to solve this problem next year by doubling the production and by filling orders in advance so that all stores have enough beer for the holiday. 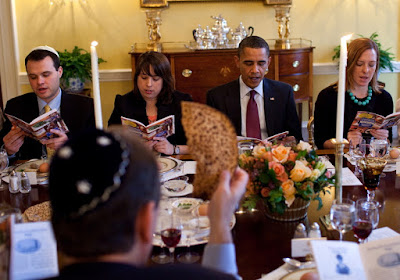 Bryan is also negotiating the possibility of exporting his Passover beer next year to the unquenchable American Jewish market.

After Meadan has proven how much the public really thirsts for kosher-for-Passover beer, it's likely that other brewers will try to get into this market in 2017.  However, they face the daunting task of cleansing their breweries of all leavened grain.  Though possible, it's probably prohibitively expensive.

"We are now returning to brew our regular gluten-free beers, but with improvements," Bryan said.  "For example, we will have two Date Ales: One with the same recipe as our Passover Date Ale, and a Bitter Date Ale, with a higher alcoholic content.  Our Buckwheat Beer will have a fuller body, and our Hummus (Chickpea) Beer will be less sour, while staying very hoppy."
Posted by Doug Greener at Tuesday, May 10, 2016