Moish Rubinstein's new beer: Making a Highland out of a Hill

My friend Moish Rubinstein took the leap from beer blogger, beer reviewer and beer aficionado to beer brewer.  It took guts.  The kind of guts that made America great . . .  wait, that's for a different audience.

Moish writes "the other English blog" on Israeli beer, called Beer Israel (http://beerisrael.com/), in which he offers reviews and comments on Israeli craft beers and breweries.  If you don't know it, it's worth checking out.  Moish knows Israeli beers. 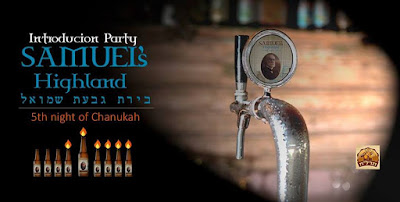 The other night, he launched his own beer, Samuel's Highland, at a party in the Tarlach pub in Petach Tikva.  He calls it a "Zion Pale Ale," which is as good as any other designation.

The beer's name comes from Moish's town of Givat Shmuel, near Ramat Gan and B'nei Brak, which translates accurately as "Samuel's Hill."  The "Highland" part is more of a poetic flourish harking back to Moish's own Scottish heritage.

"My family came from Scotland," he told me, "even though I was born in Liverpool and raised in Manchester."

Moish is keeping his day job as a consultant to start-up financial broker companies, even as he moves from passive observer and writer to active commercial brewer.  This is worthy of praise and, to tell the truth, is what keeps people young.

Why take this step?, is what I asked Moish.  This was his answer:

"1) Being a blogger made me a believer in the culture of craft beer, and I want to be a part of it.

"2) Grass-roots brewing means that you want others to enjoy your beer, and I can reach more people if I sell it commercially.

"3) Israel is the most natural place in the world to be a beer-brewing entrepreneur.  It was the 'start-up nation' mentality that made me do it.  That mentality is paramount in this country.  It's what makes everything tick -- from the kibbutz to hi-tech to craft breweries.

"4) In Great Britain, where I grew up, craft beers are very geographical and local, expressing pride in your home area.  Samuel's Highland tries to do that.  The name honors the founder of Givat Shmuel, Samuel Pineles (1843-1928), a great philanthropist and Zionist.  The kumquats which I use in the brewing come from the parks in Givat Shmuel."

Yes, you read that right.  Samuel's Highland is one of the only beers in the world which is flavored with kumquats, those little yellow oval-shaped fruits with the edible skins.  In fact, according to Moish, it's the skin which imparts a sweetness to the beer, while the inside fruit pulp gives it notes of tangy bitterness.

The beer's base is an American pale ale, to which Moish adds whole kumquats during the boil.  This draws the sweet oils out of the peel.  Then during the cooling process, the kumquats are crushed, allowing the bitter, citrusy juice to enter the recipe.

The kumquats are also used a third time, but Moish is keeping this a secret. 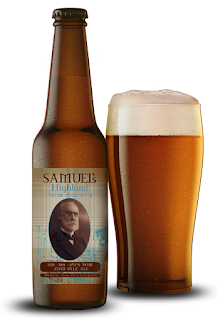 Samuel's Highland beer pours out an opaque copper color with very low carbonation.  The citrus aroma from the hops and the kumquats is delicious (if a smell can be called "delicious").  The first taste is rather mellow, continuing with the fruit theme, but then the sharp bitterness hits.  That's what raises your eyebrows.  The finish is dry and bitter.

For sure, this was an unexpected beer, very different from the styles you find in most craft breweries.
The kumquats really add a unique set of aromas and flavors.  I go back to Ernest Hemingway who said, in so many words, if you're just going to make a copy of something else, why bother?

Samuel's Highland is nobody's copy.  It's a good beer to have if you want to try something different.  In the meantime, it's available only in shops in Givat Shmuel and environs, and in the beer specialty stores in Tel Aviv and Jerusalem.  But Moish plans to bring his beer to more and more people, and if anyone can do it, he can.
Posted by Doug Greener at Sunday, December 20, 2015