It's not healthy to spend too much time glued to the pages of Israel Brews and Views, so I'd like to direct your attention to an online article and an online video which have appeared recently and may be of interest to you all.

The article appeared on the website Breaking Israel News, and it was written by Raphael Poch on the subject of Israeli micro-breweries.  Yours truly, the old blogger, was quoted a few times in this round-up of the Israel craft brewing scene.

You can access the full article by clicking here. 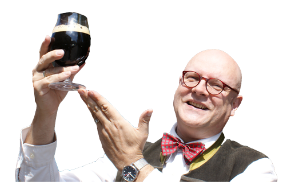 The video was posted by Conrad Seidl, the "Beer Pope" of Austria, as one of the weekly reviews of beer on his blog.  In this particular video, Conrad reviews Embargo Cuban Tobacco Leaf Porter from Herzl Beer in Jerusalem.  And -- no surprise here -- the Beer Pope loves it.  Conrad's enthusiasm and expressive gestures make him a great presenter.  After drinking Embargo, he wonders whether he should be called the "Beer Rabbi."

View Conrad's video in English by clicking here.  Once you're on his blog site, you can also access a German version of the same thing, if you find that easier to understand.

I wrote about Conrad Seidl in an earlier post after he visited Israel this summer.  You can refresh your memory by clicking here.
Posted by Doug Greener at Sunday, November 01, 2015