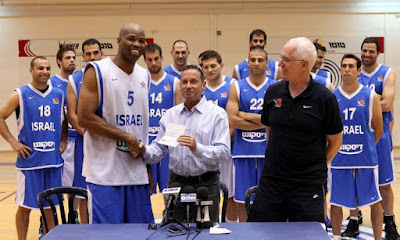 To tell the truth, I've never had any interest in following Israeli basketball, neither the local teams nor the national basketball team when it plays in the Euro league.  One of the reasons is that the teams are hardly Israeli.  Of the five players on the court at any one time, two or three are mercenaries -- mostly American basketball players, perhaps NBA rejects, who are hired by the Israeli teams to play for a season or two.

When I ask this, sport fans tell me, "well, bringing these guys over here to play in Israel is helping to raise the level of all Israeli basketball."

If that's really true, maybe it works with craft beer too.  I was just at a launch in the Glen Whisky Bar in Jerusalem of two new foreign beer brands in Israel -- heavy hitters from Germany and Belgium which perhaps will raise the standard for our own brewers.

The first of these is the Riegele Brewery from Augsburg in Bavaria.  Riegele is a family brewery that has been making good, solid beers since 1386(!).  The current owner, Sebastian Priller-Riegele, is a world-famous beer sommelier (cicerone), who decided to add craft beers to the brewery's repertoire.  They now make eight different craft beers, six of which are imported into Israel, five of which we tasted.

Doing the presenting was Yotam Baras, formerly from The Dictator Brewery.  Yotam is now head of marketing for Protary's Craft Beers, the importers of Riegele.  All of these beers come in 660 ml bottles, that is, double the size of regular beer bottles.  "When you're dealing with such quality," Yotam told us, "it would be a shame to have it in small packages."

And quality it was!  Starting at the lighter end of the spectrum, the first beer we tasted was called Simco 3, a very aromatic pale ale, rich in tropical fruit flavors.  There is a very hoppy aroma, caramel and citrus, and a pleasant bitter finish.  Alcohol by volume is 5%.  The "3" in the title refers to three different kinds of hops used in this beer.  One of them, as you might have guessed, is Simcoe from the U.S.

The second beer was Amaris 50, a pale Pilsner lager.  The "50" refers to the international bitterness units (IBUs), which make this a very bitter beer.  Yet there was also spicy hop aroma and tastes of lemon and pine.  ABV is 5%.

Beer number three was Ator 20, a 7.5% ABV double bock (doppelbock), the very heavy and strong lager beers originally brewed by German monks.  "-Ator" has become the suffix used for naming double bock beers, and the "20" refers to the Plato scale used to measure the amount of fermentable sugars to water.  The beer poured a dark reddish-brown with a thick cream-colored head.  I got tastes of licorice and prunes, with a caramel sweetness.  It was full-bodied and "chewy" -- no wonder the monks called double bock beer, "liquid bread."  Although the alcohol level is high, you hardly taste it.

Next in line was Augustus 8, a weizenbock beer, in other words, a strong bock beer made with a good portion of malted wheat.  This adds a creaminess to the beer, as well as the distinctive characteristics of a wheat beer: ripe banana, orange, cloves and spice.  This is definitely a sweet beer, with tastes of fruits and hops.

Augustus was the Roman emperor who founded Augsburg, home of the Riegele Brewery, and the"8" refers to the 8% ABV.

Our last beer in the Riegele line was a big, bold imperial stout named Noctus 100.  This beer poured as black as night ("noctus" in Latin), measuring 100 on the SRM (standard reference method) for measuring the color of beer.  One hundred is way off the charts; nothing can be darker.

This is a beer you feel you can eat.  The dominant tastes are dark chocolate, espresso and roasted coffee, along with licorice, dried fruits and caramel.  This strong (10% ABV), beautiful beer was made to enjoy during the wintry days and nights that bless our globe.  It's also a perfect pairing for the strongest tasting, spiciest foods, the most powerful, smelliest cheeses, and the sweetest dark chocolate desserts.

After we finished the Riegele beers, Yotam popped the caps of two Gulden Draak (Golden Dragon) beers from the Van Steenberge Brewery in Ertvelde, Belgium -- also making their Israeli premiers.

The first we tasted was Gulden Draak 9000, in the black bottle, a quadruple Belgian ale with 10.5% alcohol.  Yotam explained that the ABV was boosted by the use of wine yeast, which produces more alcohol.  This dark amber-colored beer had a delicious flavor of yeast, malt, dark fruits and bananas.  "Rich and round" is what came to mind.  The strong alcohol is unmistakable, giving you a warm feeling all the way down.

The Gulden Draak Dark Strong Ale, in the white label, is a darker brown color than the 9000 but with the same 10.5% alcoholic content.  I found it more balanced than the 9000. with similar tastes but sweeter, more intense flavors: brown sugar, caramel, bananas, espresso and spices.  This is a beer you sip and savor; something that the Belgians seem to do so right.

So in the end, I guess it's good to have these new players in Israel.  They present a standard to which Israeli brewers can aspire.  Certainly, nothing even close to the dark German and Belgian beers is made in Israel, and it's good that we have this choice when we buy beer. 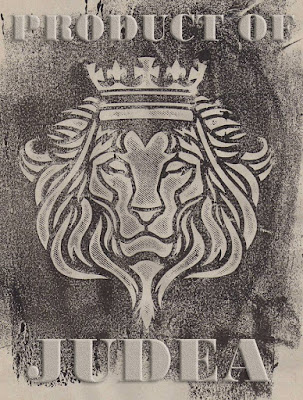 Yet, I must add that it's difficult for me in good conscience to recommend that you buy these beers.  They are made in the same European Union which is requiring member states to label certain Israeli products from the West Bank (Judea and Samaria).  Google "territorial disputes" and you'll be amazed at how many countries on every continent have disagreements over borders with their neighbors, and consider the other side to be "occupying" their land.  Yet the EU, in its wisdom, has chosen to penalize only Israel with its labeled products.

Labeling of certain products, however, is left to the discretion of individual countries.  Germany has reacted strongly against the EU guidelines, but Belgium has been labeling Israeli products from the West Bank for years.

Those are the facts, and I leave it to my readers to decide what to buy and from where.  Personally, I feel ill at ease whenever I purchase anything which supports the European Union.  I would much rather choose a product from the good ole U.S.A.

On the other hand, these are great beers. Maybe if we don't make too much of a habit about it . . .
Posted by Doug Greener at Thursday, November 12, 2015