A taste of the gold

The winners of the Sam Adams Longshot competition for home-brewers were announced on the last night of the BEERS Festival in Tel Aviv this past summer.

At the time, I promised my readers that I would do my best to get and taste the five gold medal winners and report on them.  Well, it's taken me a little while, but I have been able to round up almost all of the winning beers -- and here's what I have to say:

The three partners of the Jamoos Garage Brewery on Moshav Yarchiv near Kfar Saba, and their families, were whooping it up at the ceremony.  Their Pilsner beer had just won first prize in the Lager category and as all-around Best-in-Show . . . and their Garage Stout had taken the gold in the Dark Ale category.

American-born Ami Prager, one of the partners, told me that the three of them had served in the army together and enjoyed drinking beer in pubs.  "We saw an ad about the Longshot competition back in 2007 and decided that's what we wanted to do."  So Ami, Bentzi Alexander and Garry Barak took brewing courses and began to make beer.  When one of them bought a private house on Moshav Yarchiv, they moved their equipment into the garage and named themselves the Jamoos (Buffalo) Garage Brewery.

"In 2011," says Ami, "we won our first award in the Longshot competition, and we've won a prize every year since.  We brew 80 liter batches of beer about once a month.  We have a cooling system and do lager beers as well as ales."

"Most of our beer is given away to friends," Ami continues. "All of us have our day jobs and we're not ready to go commercial.  But maybe in the few years . . . "

The Jamoos Pilsner I had is very pale colored and well carbonated, as a pilsner lager should be, 5.2% alcohol by volume.  But from there it takes off in a non-traditional direction.  The aroma is of spice, non-distinct but sweet.  The taste has notes of peach and bazooka bubble gum -- very nice -- and for the finish, there's a surprising pepper burn in the back of your throat.  The beer is a pleasant symphony of flavors and sensations.

This is a very dark, near black stout, highly carbonated with a long-lasting tan head.  The taste is burnt spicy chocolate with coffee and a little celery.  There's no mistaking this is a stout beer, yet its combination of flavors makes it very distinct.  ABV is 5.5%.  Jamoos is definitely a brewery to watch.  If and whenever they do decide to "reach out" to the public, I highly recommend you buy and enjoy their beers. 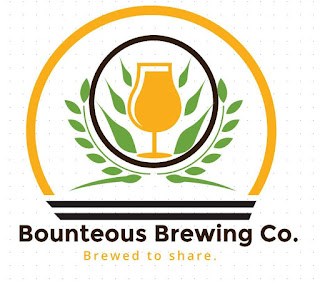 Ephraim Greenblatt is a home-brewer in Jerusalem who loves "fermenting."  Wine, whisky, vinegar, kombucha, kimchi, soy sauce -- he's done it all.  But his real passion is saved for beer.

"My goal is to make the very best beer," he declares.  "Sometimes I will spend hours changing the most minute details -- the percentages of the malts, the temperature of the water, the original gravity -- all to get the final beer just a little bit close to perfection."  Ephraim's fervency for brewing is palpable.

And Ephraim has only been brewing for a year-and-a-half.  He came to Israel from Lawrence, NY, three years ago, got married and now, at age 27, has two young children.

Ephraim has chosen the name Bounteous Brewing Co. for his beers, but he named his first prize-winning American pale ale "Vinnie is Boss," after the legendary brewmaster Vinnie Cilurzo of the Russian River Brewery in California.  His recipe is based on the Russian River menu for APA.  Although his award-winning beer used Simcoe, Amarillo and Cascade hops, the tap version I had with him used all Mosaic hops.  These are put in towards the end of the boil, as well as used in dry-hopping and "hop tea," which he makes in a French coffee press and then adds to the vat just before bottling.

The result, at 6.7% alcohol by volume, is an explosively hoppy and fruity pale ale.  I detected some pineapple notes and other less distinct fruits, as well as a light body and a nice, dry finish.  To me, this APA tasted like a very spirited India pale ale.  Why it is not has more to so with technical details than with taste and sensation, and I leave that to those on a higher pay scale.

Even though he is only an amateur home-brewer, this talented and dedicated young man is certainly an asset to the Israeli craft beer scene.

Kevin Unger and Betzalel Fialkoff of Gecko Brewery in Beit Shemesh took first place in the Freestyle category last year with their Whisky Chips beer.  They came back again this year with their India Dark Ale.  This 7.2% ABV beer is a darker version of India pale ale, known for its strong hops aroma and bitterness, and increased alcoholic content.

The winning beer pours out a very dark brown with a reddish tinge and a tan head.  It's not as hoppy or as bitter as a regular IPA.  Although it has a spicy hop aroma, the dominant taste is sweet and roasty, the result of roasted barley malt being used instead of pale.  There are flavors of burnt caramel and chocolate.  It is a very finely tuned beer.

Daniel Alman is a home-brewer from Kfar Daniel near Modi'in.  I met him to get his winning Belgian Wheat beer when I attended a meeting of Modi'in home-brewers.  This is a classical Belgian witbier, pale and cloudy, which Alman makes with coriander and orange peel, and with Hallertau and Tettnanger hops, noble hops which are low in bitterness and high in aroma.  I found it to have a particularly fruity taste and was very crisp and refreshing, with a tart finish.  As I said, well-done and classic.

Alman shared the first prize for wheat beers with the Penta Brewery, which made a smoked wheat beer.  I have not been able to track them down to get my hands and my tongue on this beer.  If I ever succeed, I'll let you know.

While I congratulate all the winners, I'm left with the question: What makes these beers first-prize winners?  Granted, they are all fine brews, but would they make a special impression on me, or anyone, who was just drinking them without previous knowledge of their awards?  I don't think so.  I have tasted quite a few unsung home-brews which have impressed me no less than these winners.

In the end, we are left with our own olfactory nerves and taste buds to make our own decisions.  When all these choices come together, beers that win awards and beers that win our admiration, the brewers will know of it -- and this is what will influence the direction and quality of Israeli craft beer.
Posted by Doug Greener at Tuesday, October 13, 2015