There I was, running around like a crazy man in the dog days of August. 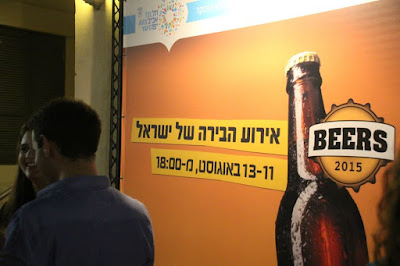 I enjoyed them all, but the only one that was 100% kick-back, eat-drink-and-think-about-nothing-else, was the Wine Festival.  I went with my friend Manny Samuels, the book seller and wine connoisseur; followed his lead, refilled my wine glass time and time again with merlots, cabernet-sauvignons, shirazes, blancs and gewürztraminer -- and never for a moment felt I had to take notes or photos.

Not so the beer festivals.  Your trusty old blogger was your eyes and ears, recording what was new, different, noteworthy or ho-hum.  Oh, I enjoyed every minute, but I also had a job to do.


I went to the BEERS 2015 Festival with my friend Yitzhak Miskin and his daughter Shoshana the bartender.  I had promised Yitzhak that I would be a good drinking buddy and spend my time with him -- but he has too much experience to believe me.  Soon enough I was falling behind, speaking with brewers and visitors, while Yitzhak and Shoshana went their own way without me.

As before, several brewers used the BEERS Festival to unveil new beers.  I was able to get some at the event and will write about them separately.  I may be a slow learner, but I finally understand that the hurly-burly of a beer festival is not the best time to seriously write down your impressions of a new beer.

I did have a chance to speak to Itay Marom of the new HaShachen ("The Neighbor") Brewery in Netanya.  He currently brews two kinds of India pale ales: a wheat IPA called Americana (5% alcohol by volume), and an "extremely hoppy" IPA called Pressure Drop (6% ABV), made with four kinds of hops.

"I've decided to brew only IPAs," says Itay, reflecting and reinforcing this growing trend in Israeli craft beers.  Where only a few years ago the number of Israeli breweries making an IPA could be counted on one hand, today almost every brewery makes at least one.

According to Itay, "IPA is a fun beer and we intend to concentrate all of our efforts on this one style."

I also met Na'ama Ashkenazi from Karkur, even though her Klara Beers have been around since 2011.  Na'ama is the only woman brewer whom I know of in Israel,  Her beers have won prizes in international competition, not a small honor for a beginning home-brewery.  She now makes her three beers at the Mivshelet Ha'am contract brewery in Even Yehuda.  Klara's very attractive and clear labels include scales which indicate the beer's bitterness, sweetness and color, as well as additional useful information.

The Ace IPA (6% alcohol by volume) is made with Sorachi Ace hops, originally developed in Japan and not very common in Israeli craft beers.  The beer is on the sweet side for an IPA, with citrus hop taste, specifically lemon.

The Belgian Tripel pours a dark amber color and has the high alcoholic content of this style (8% ABV).  It is fruity and yeasty and very sweet.  The hops are very hard to detect.

The Stout is just on the brown side of being black.  It's a pleasant stout beer, with flavors of roasted malt, strong coffee and dark chocolate.  It's one of the few beers I would call bittersweet.

For me, the emotional high point of BEERS 2015 was the award ceremony for the winners of the Samuel Adams Longshot competition for home-brewers.  In previous years, the winners were announced at the Jerusalem Beer Festival, but this year the ceremony took place in Tel Aviv.


The big winner was the Jamoos Garage Brewery on Moshav Yarchiv near Kfar Saba.  The three partners are Ami Prager, Bentzi Alexander and Garry Barak.  Their Pilsner beer won the Best-in-Show and also first prize in the Lager category. But that wasn't all.  The Jamoos brewers were also called on stage to receive first prize in the category of Dark Ale for their Dry Stout.

The first prize in the Wheat Beer category was split between Daniel Alman for his Belgian Wheat and Penta Brewery for its Smoked Wheat.

The Gecko Brewery of Kevin Unger and Betzalel Fialkoff in Beit Shemesh took the gold for their Roasted India Dark Ale in the Freestyle category.

I plan to taste and write about all (or at least most) of these winners in future posts.

Wow.  What can I say?  If there were new Israeli craft beers and new people at BEERS 2015 in Tel Aviv, there were none at this year's Jerusalem Beer Festival.  Even the long table of small home-brewers which has graced the first night of the festival for several years, was gone.  The physical aspects -- the layout, lighting, food stands, and music -- were all well organized by impresario Eli Giladi (whom I got to meet for the first time) and his company.  And I really enjoyed reconnecting with old friends and acquaintances on the Israeli craft beer scene.  But there was really nothing new that I can report.

Almost nothing: I met Gilad Dror, Marketing Director of Norman Premium, a major beer importer which also owns the Negev Brewery in Kiryat Gat.  Gilad informed me that almost all of Negev beers are now made in the Alexander Brewery in Emek Hefer.  The Kiryat Gat facility still has an active Visitors' Center and brews seasonal beers, which currently is Negev Blazer.

But, as Gilad explained, "our standard line of beers are now being brewed at Alexander.  We simply reached full capacity and were not able to keep up production at the rate we were growing.  It was either investing a lot of time and money on expansion, or moving our production line to a brewery that could accommodate us."

Maybe it makes economic sense, but the Negev Brewery was a gem for the periphery town of Kiryat Gat, and it's a shame that beer is no longer being brewed there.

The highlight (for me) of the Jerusalem Beer Festival was that I got to show around two VIP visitors from Europe: Bernhard Purin from Munich and Conrad Seidl from Vienna.  Bernhard is the director of the Jewish Museum in Munich, and Conrad, known also as the Bierpapst (the "Beer Pope"), is the most famous beer writer and blogger in Austria.


You can read more about him here:
http://bierpapst.eu/english-summary/
and see his weekly beer review videos in English here:
http://www.beer-weekly.com/

He cut a striking figure walking around the streets of Jerusalem and the Beer Festival in his traditional lederhosen!

Conrad was in his element at the Jerusalem Beer Festival, tasting and commenting on all the beers he could get his hands on.  He especially appreciated:

As the "Beer Pope," Conrad is involved in beer tastings and competitions all over the world.  We got into an interesting discussion when I told him that our own Israel Brews and Views Beer Tasting Panels concentrate on only one style of beer at each session.  How was it possible, I asked Conrad, for tastings to include different styles, pitting IPAs, stouts, pale ales and saisons (for example) against each other.  It would be like a fruit competition, I said, which  includes apples, oranges and grapes.  How can you pick the best?

Conrad answered that he tries to judge each beer by how it is true to itself, to its own style, and not necessarily in relation to other beers.  "Say that I like an IPA in the competition -- as an IPA -- more than I like a stout -- as a stout -- in the same competition.  Well then, the IPA will get more points.  In short, the beers should be tested against themselves rather then against the other beers."

Easier said than done, dear reader.  Maybe someday, we'll be able to try that -- but we still have a few more styles of Israeli craft beers to judge against each other before moving on.

To close on a dramatic note, let me just say that Bernhard and Conrad were here on a mission, a very exciting and special mission.  But that will have to wait for a future post, hopefully very soon.