Two new beers on the Israeli market (for now)

Within the last few weeks, several new Israeli craft beers have made their appearance on the Israeli market.  I hope to write about them all (not an easy task), but for now I'll mention two which won't be permanent.  Both are seasonal or time-limited. 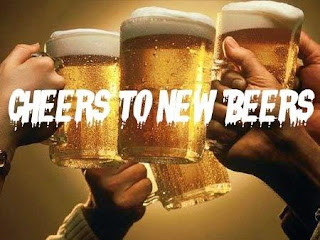 Blazer from the Negev Brewery in Kiryat Gat

The first is the third version of a Blazer beer, brewed in conjunction with Blazer Magazine, a Hebrew-language men's publication specializing in sports, automobiles, fashion, food and drink, and women.  This Blazer beer was brewed by the Negev Brewery in Kiryat Gat, but previous Blazer beers were brewed by Jem's Beer Factory in Petach Tikva and Alexander Brewery in Emek Hefer (which you can read about here.)

As always, the magazine claims that it wants to brew a beer that its readers would want to drink.  This is strange, since I imagine that among the readers of Blazer, there are those who like their beer hoppy and bitter, or malty and sweet; light-bodied, or heavy; low in alcohol, or strong. 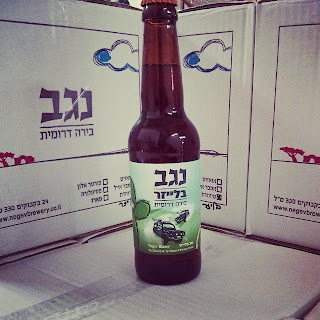 But what do I know.  The program certainly brings marketing and PR benefits to the magazine, and the participating breweries also share the spotlight.

Yishai Auman, in charge of marketing at the Negev Brewery, told me that Negev's brewmaster, Tomer Ronen, produced Negev Blazer by combining elements of an American IPA (India pale ale), including two weeks of dry-hopping (steeping hops in the beer during fermentation), with hallmarks of a Belgian trippel, full-bodied, sweet and strong.

Anyway, when I tasted it, I found the Negev version of Blazer beer to be quite similar to the Alexander version.  It poured a very appetizing dark amber color.  You could already sense the sweetness in the aroma, along with the hop character.  The taste was sweet caramel, cherries and/or berries.  This was nicely balanced by the bitterness of the hops.  Alcoholic content is a solid 6.9%.  I wrote that the Alexander Blazer was "bitter-sweet," not a common appellation for a beer, and I have to say that the Negev Blazer also fits this description.

This is a beer that suits any occasion, winter or summer, with food or without.  Its strong flavor should pair well with any spicy cuisine, flavorful salads, and non-chocolate desserts.

Yishai said that the original batch of Blazer was snatched up quickly from store shelves.  There really is none left.  But, he added, "we have done an additional brewing of Blazer and it should soon be in stores.  So those who missed out the first time will now be able to buy and enjoy our Blazer."

The new Shapiro IPA is made with American Amarillo hops, prominently proclaimed on the bottle.  These are hops grown in the West Coast state of Washington and give the beer a sweet citrus aroma and taste, specifically orange.  Amarillo hops are enjoying something of a trend these days and are popular in both the U.S. and Israel. 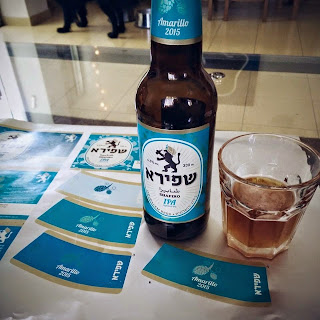 Until just a few years ago, Israeli brewers believed that the powerful flavor of hops and bitterness of India pale ales were too extreme for Israeli tastes.  Not any more.  As Israeli beer drinkers were exposed to strong IPAs from abroad, they developed a taste for this style of beer.  Today, at least 15 Israeli craft brewers are making IPAs.

Shapiro IPA pours out a lovely mid-amber color with a creamy head.  You can smell the strong hops even before you bring the glass to your nose, a sure sign of an IPA.  Along with the citrus aroma and taste (orange-grapefruit), I also detected a nice piney finish.  The beer's hop bitterness is slightly mitigated by the malt base which also comes through.  The alcoholic strength is 6.5%.

I found this to be a very refreshing and drinkable beer.  It pairs well with any spicy or strong food and cheese, fried foods, and even rich, sweet desserts.

Itzik Shapiro, a partner in the brewery, told me that he intends to bring out a different version of an IPA every spring, "in time for Independence Day."  Shapiro Brewery has been doing something similar with their Jack's Winter Ale, brewing a different dated version at the start of every winter.

I've noticed that even now in Jerusalem it's not easy to find the 2015 Shapiro IPA, with its distinctive blue label and turbaned lion.  So if you come across a bottle, don't hesitate to buy it and enjoy a thoroughly Israeli IPA.  The beer is also available on tap in Jerusalem at the Bardak Pub, Borla, Tuvia, and the Glen Whisky Bar, and in Tel Aviv at the Agnes Pub.
Posted by Doug Greener at Tuesday, May 26, 2015