I think that in our 44 years of living in Israel, my wife Trudy and I have spent Passover back in the U.S. only twice.

This year was one of them.

And so it was that I found myself having my last beer before Passover in the Kapow Bar and Pub in the Mizner Park section of Boca Raton in southern Florida.  We had come over to have the Passover seder (holiday meal) with my mother and our son Ami who lives in Washington, DC.  My mother is very sensitive about her age being known, so the most specific I can be is to say that it is approaching three digits.

In the days before we went to Kapow, I had the chance to taste two different American craft beers. 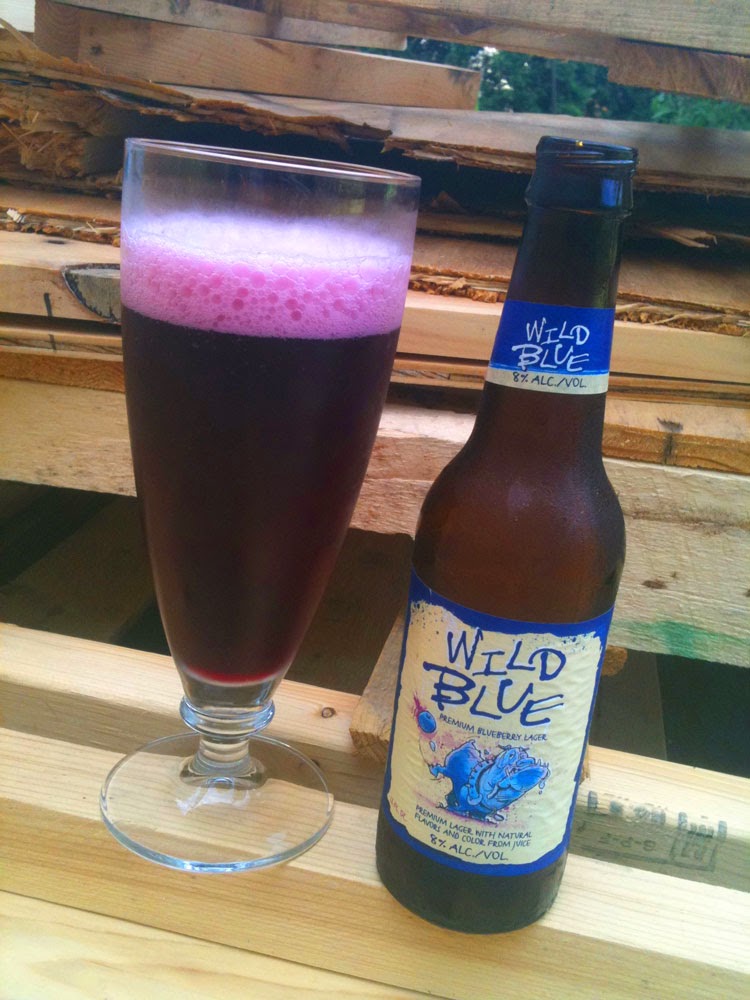 The first was Wild Blue, my first "premium blueberry lager," from Blue Dawg Brewery in Baldwinsville, New York. The label says that this beer is brewed with real blueberry juice, and in fact, it poured a dark ruby red with a purple head -- something I've never seen before.

The aroma was slightly indistinct fruity, but the taste was unmistakably bitter blueberry.  Rather nice.  The fruit blended very well with the malt, and then faded into a strong alcohol taste -- not surprising for a beer with 8% alcohol by volume.

Fruit-flavored beers are not my cup of tea, but this Wild Blue Lager was not at all bad.

I also had a 312 Urban Wheat Ale from Goose Island Brewery at an undetermined location.  I'm not a great fan of wheat beers either, but I was intrigued by the "Urban" in the title.  Apparently, "urban" means "something different," since it tastes like no other wheat beer I've had.  Hazy and the color pf pale straw, 312 Urban had little of the characteristic clove and banana aromas and tastes of a wheat beer.  Rather, it was refreshing and fruity with a very mild sweetness.  At only 4.2 ABV, it was very easy to drink and the light taste went well with my spaghetti dinner.


(My friend Jaime Jurado, Director of Brewing Operations at the Abita Brewing Company in Louisiana, informed me that both Blue Dawg and Goose Island Breweries are now owned by big beer, in this case the biggest, Anhauser-Busch InBev.  The Wild Blue, he says, is made with blueberry flavor and color, which are added to the beer.  Jaime said that there is a world of difference between beers which add fruit flavor and color this way, and those which use real fruit in the brewing process.)

Our visit to the Kapow Bar and Pub took place on the night before Passover, when we had our final meal containing leavened grain.  This is what is prohibited during the seven-day holiday, and it includes all bread, pastries, pasta, etc. -- and, of course, beer.

Our friendly waiter understood our situation.  His name was Danny Murphy ("A nice Jewish name, right?") and he had been in Israel last summer on a Birthright program which brings young Jews on free ten-day visits to Israel

I asked Danny if there were any local craft beers on tap which warrant being my last beer before Passover.  He offered me two to taste. 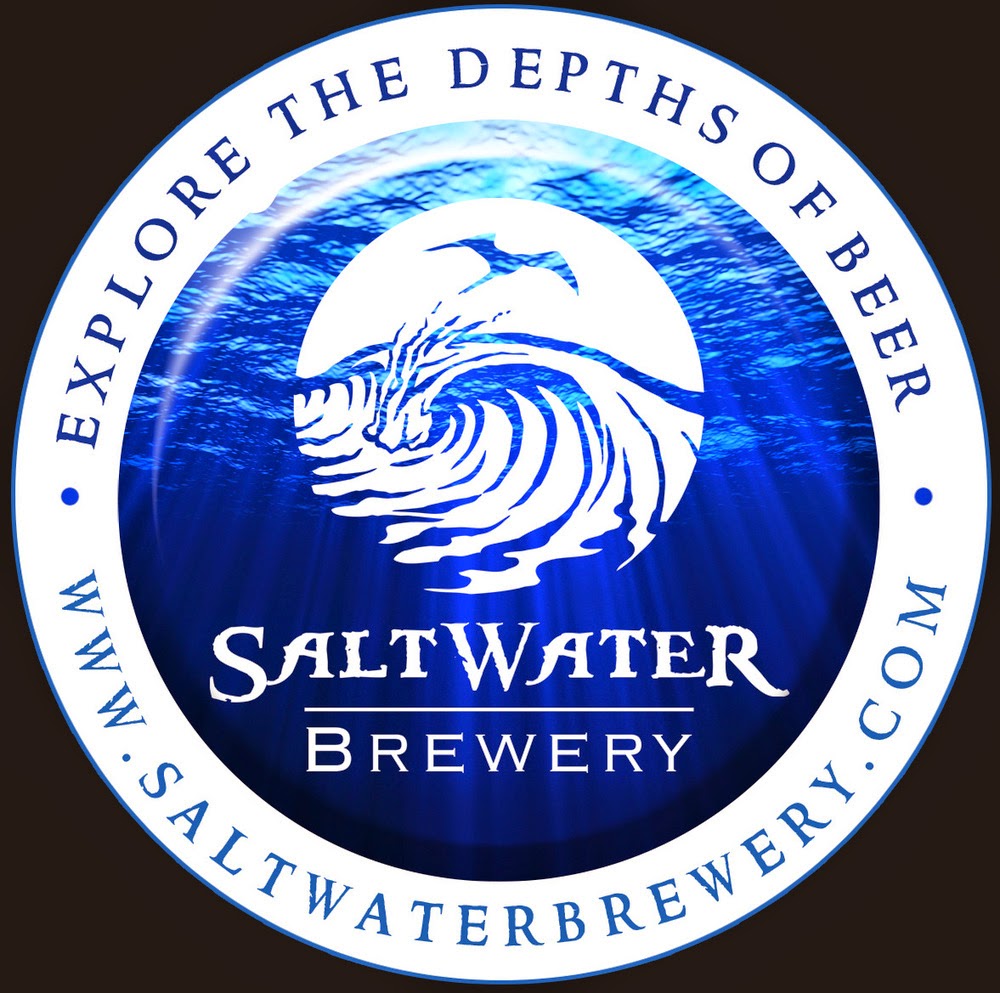 The first was the Vanilla Oak Dry-Hopped South End from SaltWater Brewery in Delray Beach, Florida -- very close to where my mother lives.  It was a very light-colored American pale ale with a strong hop aroma -- not less than any aggressive IPA.  It had a citrus taste which was mild and fruity, probably closest to red grapefruit with drops of vanilla.  I learned later that this beer is aged on "high vanilla American oak" staves (whatever those are) and with an experimental hop numbered 05256.  How very James Bond-ish. 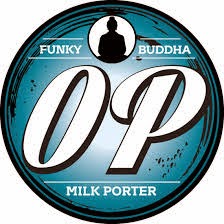 The other beer was the OP Porter, an American milk porter from the Funky Buddha Brewery in Oakland Park, Florida.  This one came to my table full black with no head and very little carbonation.  Although I am not a great porter fan, I loved this beer's taste combo of coffee, chocolate and sour cherry, along with the full roasty body of a strong porter.  OP Porter is brewed with added milk sugar and has a 6.3% alcoholic content.  This is the beer I chose to have with my spicy rice and vegetables.

I discovered that instead of extinguishing the fire of my food, the OP Porter was spreading it.  The burning sensation rippled across my sensitized tongue.  I don't recommend this for everybody, but I found that this heightened pain actually intensified the taste of the food.  Maybe I'm just a foodie masochist!

After wishing Danny a Happy Passover, I left Kapow feeling ready for the seven-day beer fast.

Passover began on a Friday night. For my ageless mom, it was the first time she was at a seder in our family setting in over 20 years.  She enjoyed everything about it: the special foods, the historical narrative and the traditional songs.

Trudy and I also enjoyed being in southern Florida for the holiday: the days were sunny and pleasant and we visited the magnificent Everglades National Park and Key Largo.

But we also missed being in Jerusalem, where you really feel the holiday everywhere and at all time: in the stores and restaurants, on TV and radio, on the streets full of kids off from school, tourists visiting the Holy Land, and Israeli families enjoying a week-long vacation.

It was good to get back home and catch up with our excellent Israeli craft beers.  They definitely hold their own against the beers I tasted in the U.S. -- including those from a local Miami brewery we visited.

But more on that later.