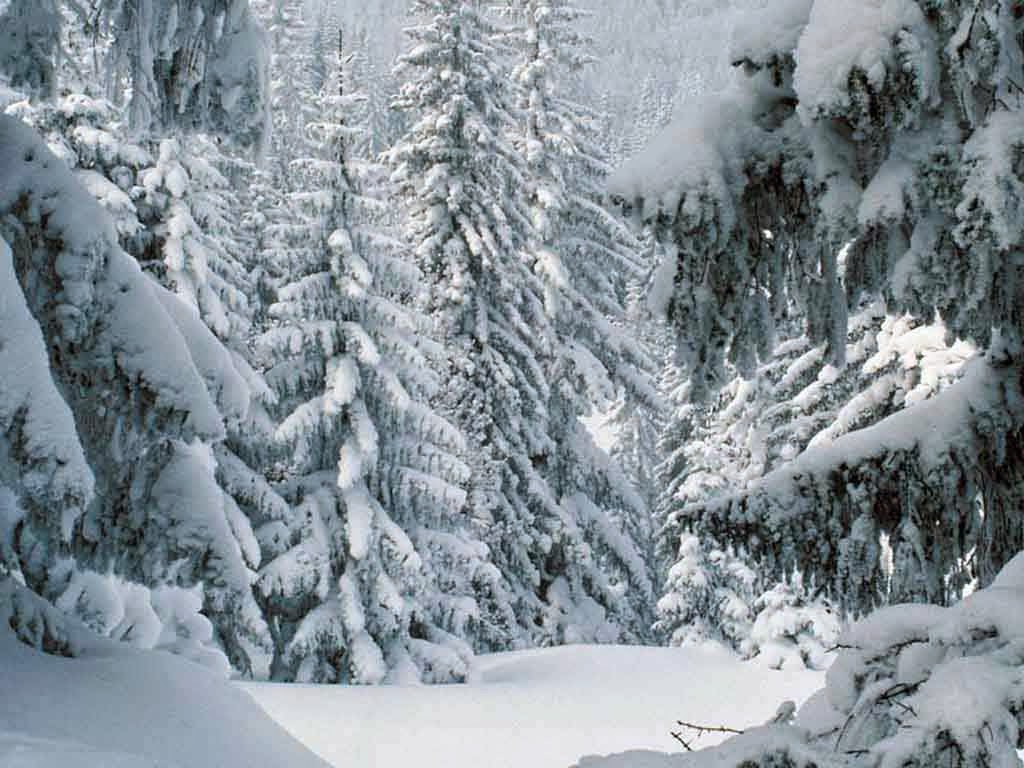 Some Israeli brewers come right out and say "Christmas," which is probably not so politically correct.  Others say "Winter" or "Holiday" or even "Hanukka."  But all of them are talking about the heavier, darker and stronger ales which people have been drinking in the colder months of the year for centuries.

As we now face the icy blasts of winter. I must admit that I don't really understand the physiology of the matter.  Putting any cold beer down your gullet on a cold day isn't going to make you any warmer.  But, as any drinker can tell you, the heavy dose of alcohol does give you the "feeling" of warming up -- witness the St. Bernard dogs who were sent out to find lost travelers and hikers in the snow, with a cask of whisky (or was it a good strong German doppelbock lager?) around their necks. 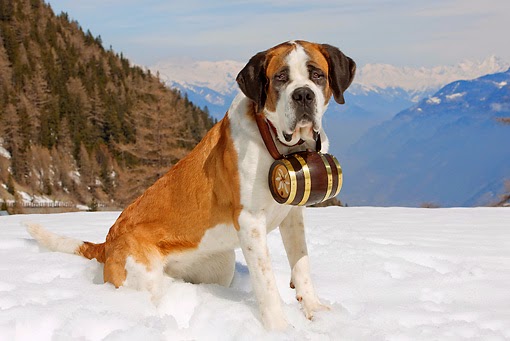 And so, it's perfectly natural this time of year, when days are short and nights are long and cold, to taste some Israeli winter holiday ales.  I chose six which were especially brewed for this season: four can be found on the shelves of select liquor stores and two were home-brewed to be enjoyed with a smaller circle of friends and family. 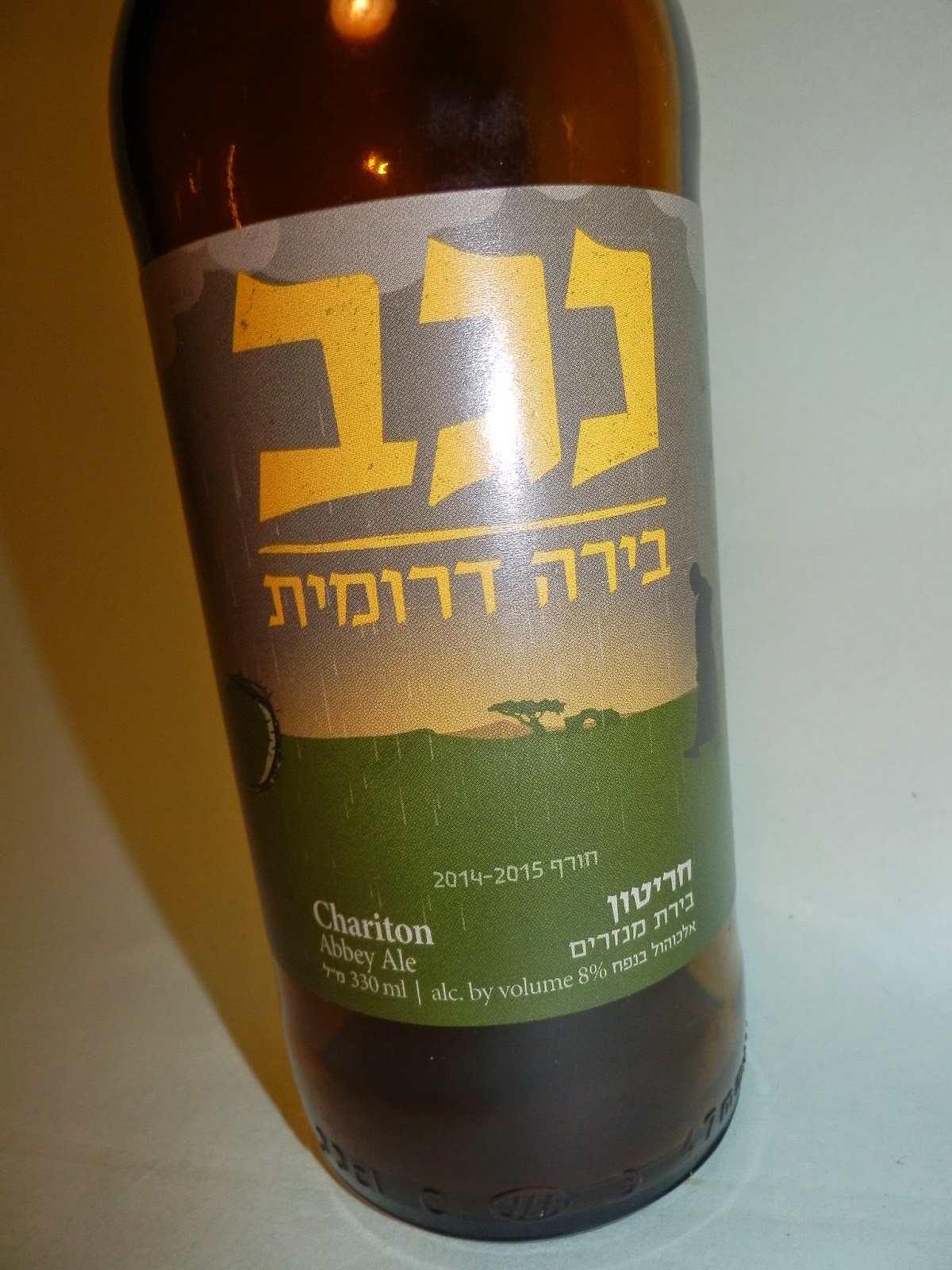 We'll begin with Chariton Abbey Ale, a seasonal winter beer produced by Negev Brewery in Kiryat Gat.  Chariton was the name of a monk who lived in the Judean Desert in the fourth century.  It's a good name for an abbey ale, those strong beers from the Belgian side of the family, brewed by monks for many centuries.

My neighbor Moshe joined me for the new 2014-2015 version.  At 8% alcohol by volume, this is indeed a strong beer.  It pours a dark amber color with a small head.  You notice that it's very carbonated, a result of added CO2.  The aroma is roasted caramel and spicy pepper.  Flavors included sweet fruits and chocolate malt.  The bottle says that it is made with "local spices" without naming them.  Moshe ventured that one of them was zaatar, otherwise known as biblical hyssop.

We both thought that this was a delicious and warming beer, perfect for a cold evening.  It also was an excellent accompaniment to a piece of dark chocolate.  Yum! 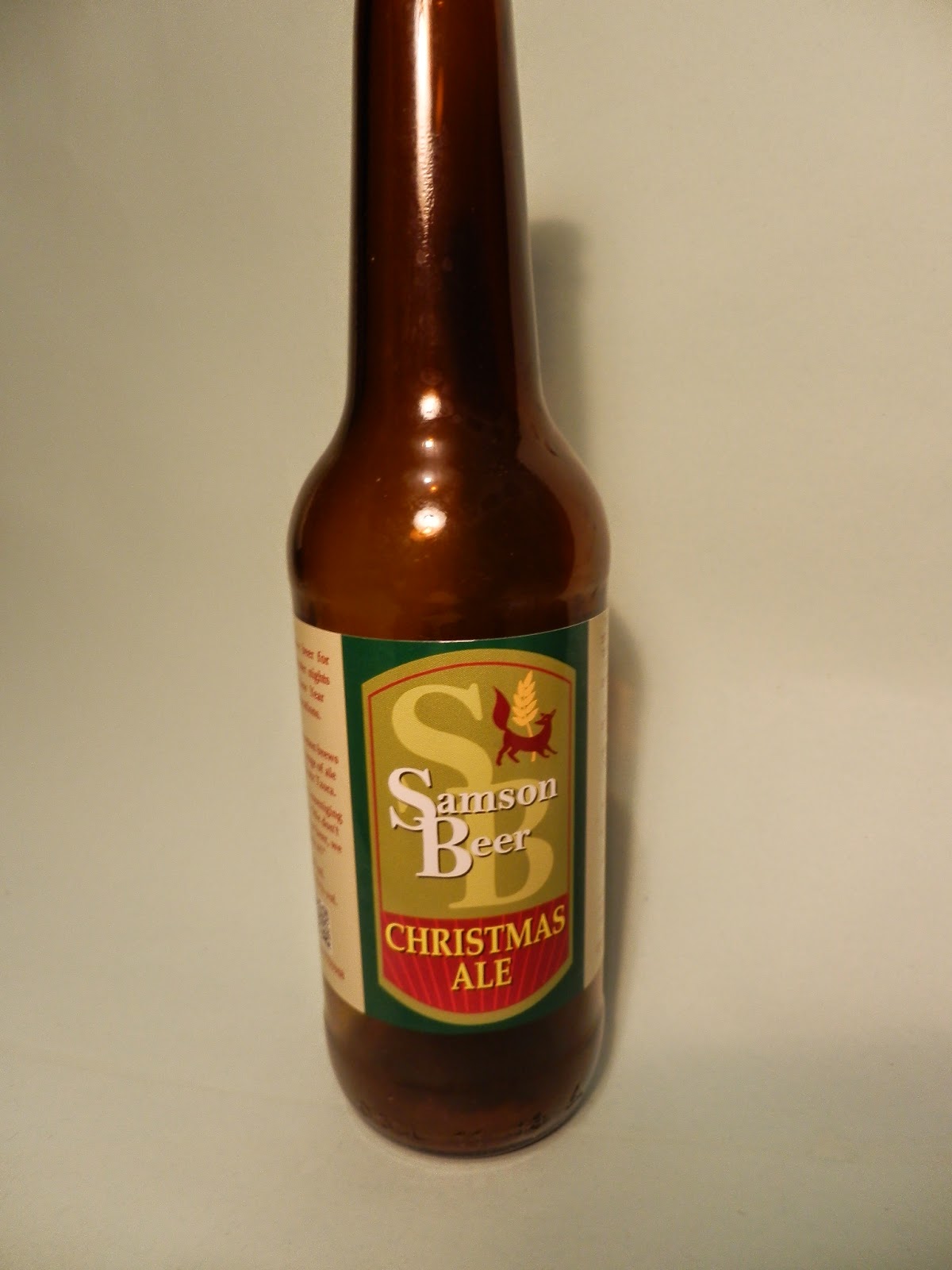 Next up was Christmas Ale from the Samson Brewery on Kibbutz Tzora.  This was the not the first time that I tried it. That introduction was made when I visited the brewery a few months ago and met with Leon Solomon.  (You can read about that first encounter here.)  Samson beers are available only at the brewery.

Now, drinking it again in the winter, we appreciated even more its taste and strength (7.5% ABV).  It pours very dark with a thin head.  The aromas that reach your nose ("like an Indian kitchen," is how Moshe put it) are ginger and cinnamon, which Solomon does indeed put into the brew, along with cloves, cardamon and orange peel.  These are all spices associated with the holiday, and they blend very well to give this beer a festive flavor.  We found it less sweet than the other winter beers, but with distinct notes of brown sugar and caramel.


The Zambish Hanukka Ale is arguably the best beer home-brewed by my neighbor Moshe Lifshitz himself.  The color is a beautiful dark copper with a reddish tinge. The head is a long-lasting red-tan.  What you smell first is citrusy hops, kind of surprising for such a dark beer, but it's well balanced by the brown sugar and berry sweetness which comes when you swallow.  In fact, it's the balance between the hops and the malt that makes this beer so interesting. Moshe used a Belgian yeast, so it's no mystery if this beer reminds you of a Belgian strong ale. Moshe surmises that the alcoholic content is in the 7-8% range -- about what a Hanukka beer should be. 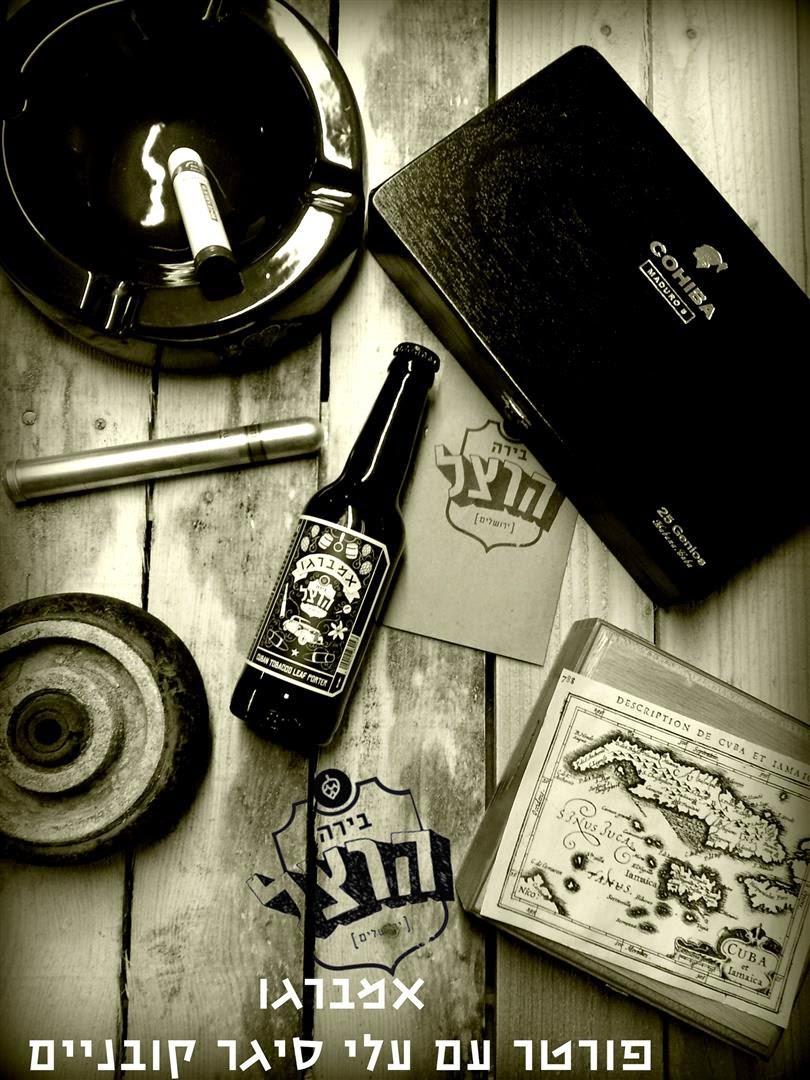 Embargo is the brand new beer from Herzl Brewery in Jerusalem.  It's a good strong porter (6% ABV) made with real Cuban tobacco leaves.  These are added during fermentation.  Aside from a small mention of a tobacco beer somewhere in Italy, I was unable to find reports of any other beer flavored with tobacco.  The subject has come up in home-brewing forums but as far as I can tell, has not been acted on - until now.

The name Embargo is a nice allusion to the U.S. embargo on Cuban cigars that is only now being lifted after 54 years.  In Israel, Cuban cigars and tobacco have always been available.

Embargo pours very dark, close to black, and the aroma is heavily malt.  At first sip, I wondered, "where's the tobacco."  And then, at the end of the swallow, there it was.  (Funny how we perceive tastes like that.)  I'm not that much of an expert to identify the tobacco as "Cuban," but it was definitely cigarish.  Moshe and I also detected notes of chocolate and pepper.  We described Embargo as "surprising" and "special," and made notes to buy more. 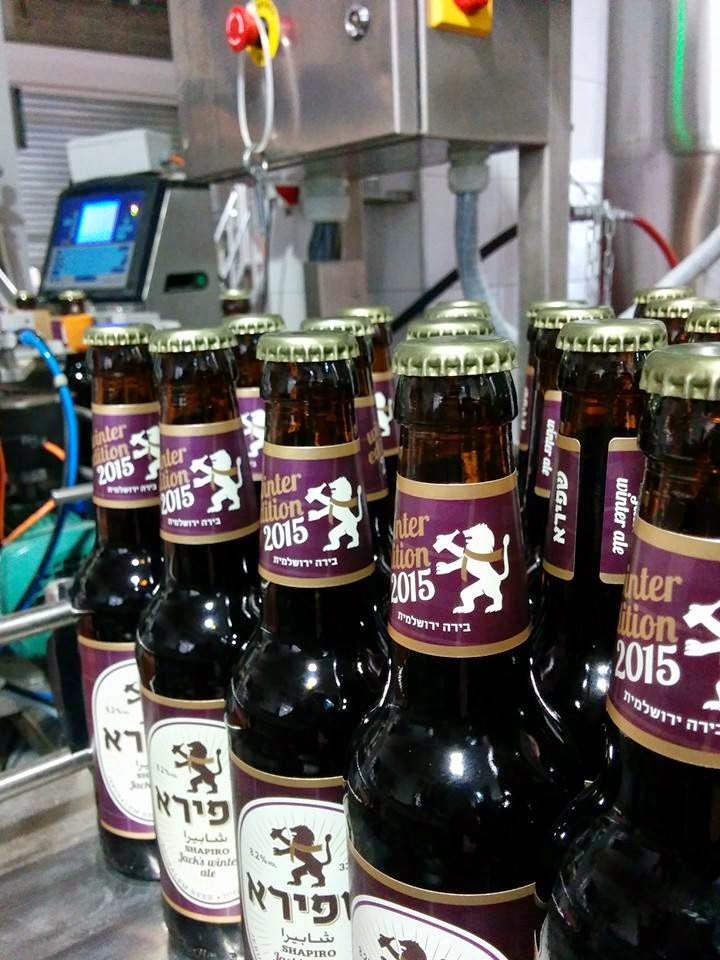 For the past few years, I've been looking forward every winter to the appearance of Jack's Winter Ale from the Shapiro Brewery in Beit Shemesh.  And this year's (2015) edition is truly exceptional. Jack's is made with wood chips soaked in Jack Daniel's Tennessee Whiskey, which gives the beer a full and rich body, and smooth, buttery finish.

It pours a red-copper color with a scent of sweet malt and ripe fruits.  The flavor is bitter-sweet, with the hop bitterness preventing it from being cloying.

We detected tastes of banana, vanilla, burnt butter and bourbon.  You can feel the very high (8.2%) alcoholic content but it doesn't impose on the taste at all.  This is a great beer for any winter meal.  By itself, it's a beautiful warming dessert.

Downtown Brown from Dancing Camel in Tel Aviv has been around for a while as a traditional American brown ale.  But for the past two years or so, it's been brewed with the additional spices of nutmeg, cinnamon and ginger -- and this is what transforms it into a true winter holiday ale.

This strong bodied beer pours a very dark brown with a dark tan head.  The unmistakable smell of nutmeg hits you first, though Moshe's first reaction to the aroma was, "coca-cola."  The taste is well balanced with very low roasted malt sweetness and almost no hop bitterness.  Cinnamon is the strongest taste, overpowering the others, which we just detected as pepper, coffee and licorice.

The current version of Downtown Brown is a highly spiced winter ale which will get you into a flavorful holiday mood every time you open a bottle.

These six beers are good examples of Israeli winter ales, but there are more out there.  The time to best enjoy them is now, while the cold, rain and snow invade our shores.  Open a bottle and feel the warmth.
Posted by Doug Greener at Wednesday, January 28, 2015