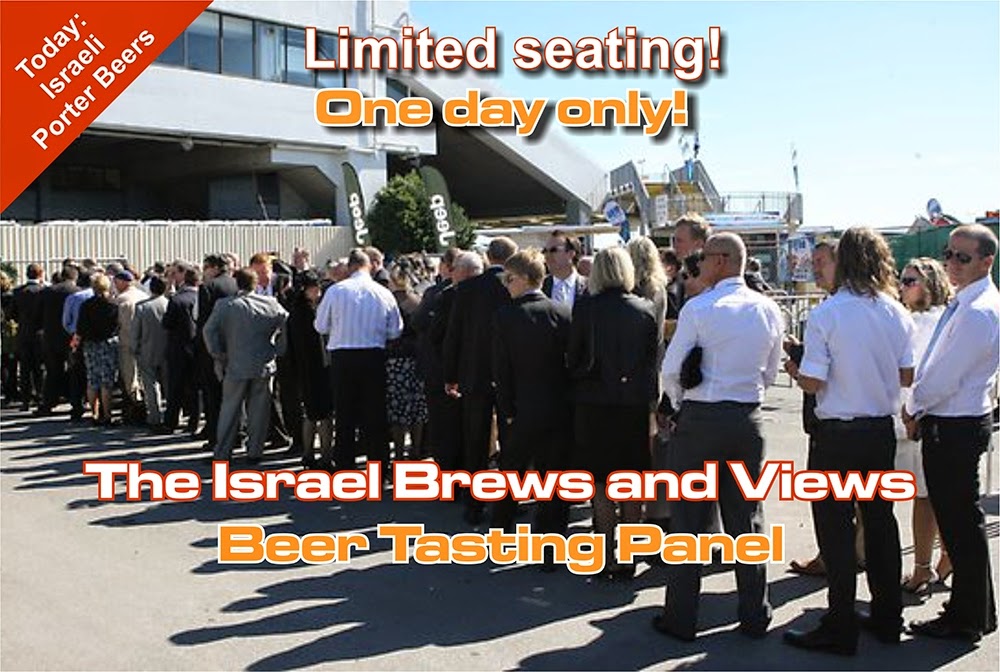 The Israel Brews and Views panel of judges met in not-so-solemn assembly recently to taste and rank Israeli-brewed porter beers.  The results have been tallied and we are happy to bring them to the beer-loving public's attention.

Not too many Israeli craft breweries make a porter.  We got six from more-or-less commercial brewers, and one from a home-brewer whom I met at the Jerusalem Beer Festival.  As I said more than once, beer levels the playing field.  Someone who boils up a ten-liter pot on his kitchen stove can produce a beer as good or better than a professional brewery bottling 20,000 liters a month.

Porter is an interesting beer.  Most beer historians will tell you that it started in London in the 18th century.  Workingmen wanted a stronger and heartier beer than the pale ales and brown ales they were getting in the pubs.  So some of the publicans blended different ales together to make something stronger.  This blend became very popular with the transportation workers, or porters, and its new name was born.

Porters are a dark beer, malty and sweet with very little hop flavor, and light- to medium-bodied.  Alcohol by volume is not over 6%.  It doesn't have the roasted barley taste of its younger cousin, stout beer.

Though England is the homeland of porters, today American craft breweries are doing it best.  And Israeli craft brewers seem to be picking up on this style as well.

As with our past panels, our tastings were completely blind.  All glasses just had a number on them, corresponding to a beer which only the server knew.  The judges recorded their impressions on a specially prepared page and when they were finished, gave each beer a ranking.  The best beer received seven points, number two got six points, and so on.  All the points given to each beer were counted to obtain the final rankings.

Before we get to the rankings, I want to say that the point spread was very small for the seven beers: Only ten points separated first place from last.  There was no unanimity of tastes.  For example, the beer that came in first place was awarded the most number of points by only one judge -- whereas one of the second place beers received the most points from four judges, while the other judges gave it only one or two points!  So you can safely say that our judges truly represented a cross-section of the drinking public and, it seems, of different tastes as well.

Our judges were a collection of nine beer lovers who know what we like and can make relatively intelligent comments on it.  Who are we?

Sixth Place:
Avodah Shchorah ("Dirty Work") -- From HeChatzer Brewery (Back Yard Beer) in Ra'anana, this beer is a 4.5% ABV brown porter made, as the bottle says, "for the worker and for labor."  So in this, it stays true to porter's roots.

Fourth Place:
Wiesenfelder Porter -- Home-brewed by Mano Peled in Moshav Talmei Yaffe near Ashkelon, at 6.3% ABV.  It made a good account for itself.

Third Place:
Alexander Black -- From Alexander Brewery in Emek Hefer.  At 7% ABV, this was the strongest of the porters we tasted.  It is a seasonal beer, brewed only in the winter.

Tie for Second Place:
FassPorter -- From the Fass Brewhouse on Kibbutz Geshur on the Golan Heights.  This 4.8% ABV classic porter is brewed with malted wheat in addition to malted barley.

Chatzot ("Midnight") Dark Porter -- From HaDubim Brewery in Even Yehuda (Mivshelet Ha'am), At 5% ABV, the brewer calls this an "English porter style."  Made with added sugar.

First Place:
Maibeerovicz Porter -- From the home brewery of the Maierovicz family in Moshav Olesh near Nachal Alexander, at 6% ABV.  Though small, they brew many different kinds of beer!

So, congratulations to Enrique Maierovicz and Niva Hermoni for their excellent porter.

And while we're on the subject, I want to mention two other porters which were not in the competition.  These were made by home-brewer Boaz Harel of Tel Mond, who bottles his beers under the Three Cats Brewery label ("Beer with Claws").

Earlier this year, Boaz took part in the International Home Brew Project, originating in Britain.  Participants were sent a recipe for porter beer which was first brewed in 1834 in Norwich, when porter had become about the most popular beer around.  It contained three kinds of malts -- pale, brown and black -- Fuggles hops, and ale yeast from Britain.

"I started brewing the original batch according to the old recipe," explains Boaz.  "Since brown malt is not readily available, I had to make my own from the pale malt.  After the wort was boiled, I took half of the batch and began to treat it like a modern porter -- meaning I added more wort with chocolate malt and more base malt, and fermented it at a lower temperature."

The result was two porters separated, as it were, by 180 years of brewing development. 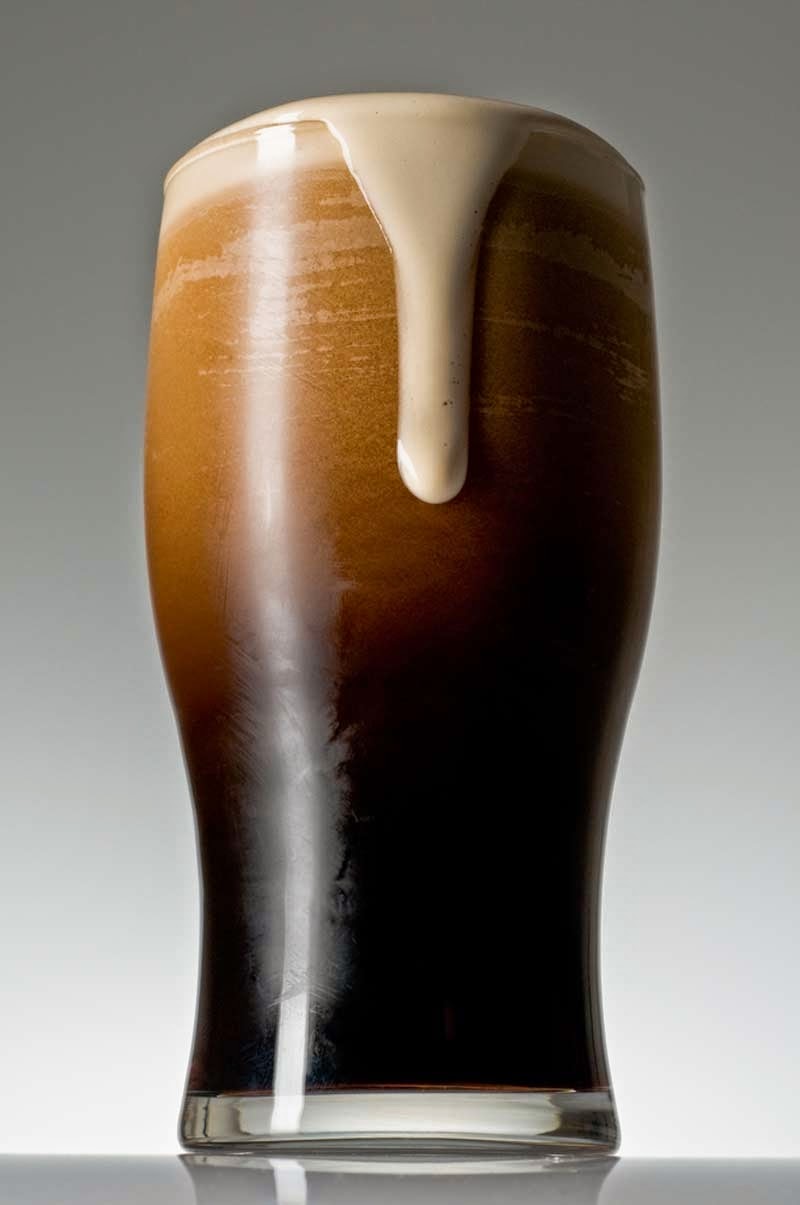 I started with the 1834 porter.  It poured very dark, with a frothy tan head which dissipated rapidly.  The aroma was of cut hay, and the taste was roasty (not really expected in modern porters) with sour licorice and coffee.  It was a very bitter drink (82 IBUs!), acidic and dry, and it made my mouth pucker like when eating unripe fruit.  The alcoholic content is a strong 5.8%.

Boaz told me that the actual 1834 porter would have been even more bitter and drier than his reproduction.  This is because of the rougher kilning methods and longer hop boils used in those days.

I remembered what a wise musicologist told me a few years ago: When we listen to Mozart, we are hearing him with our modern ears, but that's not how people heard him in the 18th century.  So I tried to imagine myself as a city porter in London 200 years ago.  During my 12-hour working days in a dirty, grimy city, bone-chilling in the winter, hot and stinky in the summer, no quick snacks, no fast food, body aching and maybe racked with pain -- I'd be ready for a strong, tasty, filling ale, with enough alcohol to cut the ache but not flip me horizontal.  In that imagination, Boaz's porter would be just about right.

On the other hand, the modern porter that Boaz brewed was even darker, but less bitter ("only" 70 IBUs) and less hoppy.  There were more dark fruits in the aroma and the taste.  This beer was even stronger -- 7% ABV -- but the alcohol was harder to detect.  All in all, I think it was an excellent porter, just right for 2014.

However, to tell the truth, I preferred the straight 1834 drink.  To keep the musical metaphor, it had a symphony of complex flavors which were very enjoyable.  But I've always been old-fashioned.

My congratulations and thanks to Boaz Harel for taking up the challenge of the International Home Brew Project and allowing me to share in the results.  It gives historical perspective and a sheen of class to our Porter Beer Tasting Panel.

Our warm thanks to all the brewers who contributed beers for our Porter Beer Tasting Panel:

We would also like to thank Tamir Bunny of the Beer Market, and Shachar Hertz and Alex Filimonov of the Beer & Beyond store, both in Tel Aviv, for their assistance in choosing the beers.  Their expertise was invaluable.

I would also like to thank my wife Trudy for seeing to all the accouterments needed to keep the Tasting Panel on course.  She may not share my taste for beer, but she is committed to the success of Israel Brews and Views.

And special thanks to Judge Mike Horton, photographer and graphic designer extraordinaire, for photographing our panel and transporting us to exotic locales.
Posted by Doug Greener at Sunday, November 09, 2014