In Jerusalem, Bardak is to pubs as Hamisameach is to liquor stores -- they have the widest selection of Israeli craft beers in town.  And not only that.  According to the manager, Sion Pe'er, Bardak (located at 38 Keren Hayesod Street) has taken on the mission of promoting and selling craft beers.

"Our business model is not the same as other bars and pubs," says Sion.  "We recognize that boutique beers should cost more, but we are willing to take a lower profit to sell it at a reasonable price."

For example, Sion told me that most bars are "accustomed" to earn between 300% to 400% on the drinks they sell.  In plain English, that means that they sell a drink for three to four times the cost of what they paid for it.  (If I was shocked, it's because it's the first time I've heard it -- but it's a fact of life.)

That helps to explain why Israeli boutique beers are so pricey in most pubs. 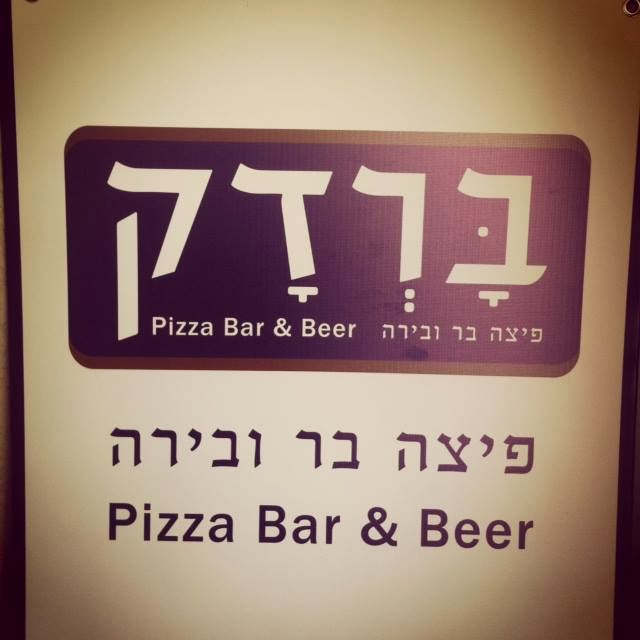 Bardak not only keeps the price of craft beers reasonable, it also puts them front and center.  The six taps at the bar are all Israeli beers: Goldstar and five Israeli crafts which change from time to time.  When I visited, they had: Negev Porter, Negev Amber Ale, Shapiro Pale Ale, Shapiro Wheat and Alexander Blond.

"And we're going to replace the Goldstar with Shapiro's new lager beer," Sion confided.  This will be a limited edition, sold only on tap.  In addition to the drafts, Bardak stocks around 38 different bottled beers, and more than half of these are from Israeli micro-breweries.

When Bardak opened in July of last year, there were only three taps, as well as the bottled beer.  "Those bottles that sold well got their own taps," said Sion.  "That's the way it works.  We may add three more taps this summer."

The bottled beer on sale at Bardak includes beers from Alexander, Shapiro, Bazelet (Golan), Herzl, Dancing Camel, Negev and Malka.  A written menu on the blackboard offered another six bottled "winter beers," including Jack's Winter Ale by Shapiro (flavored with Jack Daniel's Tennessee whiskey), Negev Chariton, Shapiro Stout and Alexander Black.  "We are open to all the Israeli micro-breweries," says Sion.  "However, experience has taught us that it's the bigger ones who are easier to work with and more reliable.

Bardak also promotes Israeli craft beers by offering free tastes of all the drafts.  Almost as soon as customers sit down, they are brought a tray of shot glasses with the five craft beers.  The waiters and waitresses, who are all beer-literate, explain the characteristics and the tastes of the beers before the customer orders.  This creates a very positive feeling towards the establishment and forms a bond between the customer and Israeli craft beer.

Bardak is popular not only with locals, but with tourists who, according to Sion, are coming to get an "authentic Israeli experience."  Bardak is ranked Number One out of 455 Jerusalem restaurants on Trip Advisor, a website used by international travelers for choosing flights, accommodations, attractions and restaurants around the world.  Though I may not be from the generation which instinctively turns to the internet for such information, I understand the immense influence sites such as Trip Advisor have in driving business.

The comments I have seen on Trip Advisor heap praise on Bardak's pizza, service and . . . Israeli beer!  That keeps the tourists coming and is a powerful endorsement for Israeli craft beers.

The Bardak model shows that if you put Israeli boutique beers in the spotlight, promote them, and charge competitive prices, they can sell well and give you a thriving business.  The decision in front of Bardak's customers is not "big beer" (cheap) vs. boutique beer (expensive), but rather, "Which Israeli craft beer are we having today?"

It's a model that should be adopted by more bars and restaurants in Israel.
Posted by Doug Greener at Sunday, February 16, 2014