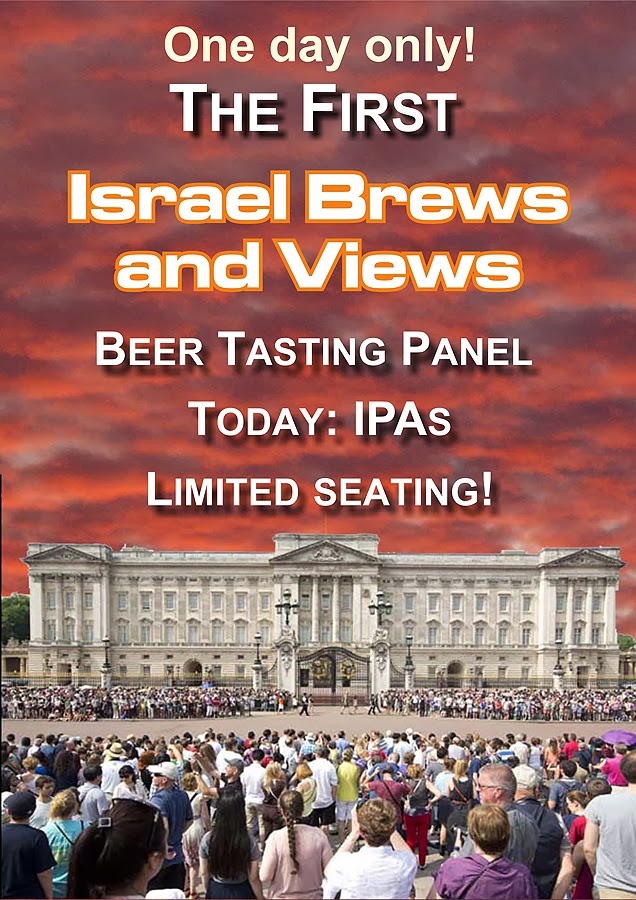 The results are in for the first Beer Tasting Panel held under the auspices of Israel Brews and Views.  The panel judges tasted and ranked eight India Pale Ales (or near IPAs) made by Israeli craft breweries.  Two sessions were held during the week of January 19-23, 2014.

Before we get to the results, some introductory remarks:

We apologize for the delay in publicizing the results.  The panel was twice delayed because of judges' illnesses.

The judges were amateur and the results were unscientific.  We are just a collection of eight beer lovers who know what we like and can make relatively intelligent comments on it.  Who are we?

Three of the beers were not officially IPAs.  We simply used them to beef up the number, and the brewers told us they could compete in the IPA category.  One was right.

Our tastings were completely blind.  All glasses just had a number on them, corresponding to a beer which only the server knew.  The judges recorded their impressions on a specially prepared page and when they were finished with all eight beers, gave each a ranking.  The best beer received eight points, number two got seven points, and so on.  All the points given to each beer were counted to obtain the final rankings.

Here then are the results of the first Israel Brews and Views Beer Tasting Panel:

IPA . . . v'Zeh -- The clear winner from the new kid on the block, Herzl Brewery in Jerusalem.  Comments included: "fruity," "good bitterness," "hops to the nose, but not the taste," "refreshing," "good for summer," "excellent IPA."

Patriot -- From the Dancing Camel in Tel Aviv, this is an American Pale Ale, with less hops and alcohol than an IPA, but the judges felt it could stand up with the best.  Comments: "moderate body, not much hops," "hoppy, light IPA(!)," "flavor difficult to fathom," "excellent, not too shy, not too light."

Pavo Israeli Pale Ale -- Although "Israeli" instead of "India," it is alphabetically an "IPA," isn't it?  The Pavo Brewery in Zichron Yaakov says that this is an IPA made for the Israeli "palate and climate."  Some comments: "strong, bitter & pleasant hoppy," "thin experience," "flat, undeveloped taste, no fruit," "soapy," "light bitterness."

The beers we tasted do not include every Israeli micro-brewed IPA.  They are the ones we could get easily in Jerusalem and Mevasseret Zion.  We hope to have a second IPA panel in the future which will include the other Israeli IPAs.

I call now on all the Israeli craft breweries to let me know now if you make an IPA.  We will take steps to obtain it, be you in Metulla or Eilat!  Readers should also let me know about other Israeli IPAs.

I would like to publicly thank Ofer Ronen of Srigim Brewery for donating Ronen's "The Ugly Indian" IPA to our tasting panel and for making an extra effort to deliver the beer to us when it was not available in Jerusalem stores.

Before I close, let me say that it was not our intention to tell our readers which beers to like, or even to drink.  Taste is amazingly individual, as it should be.  I myself would not argue with the old saying: "There are no bad beers; some beers are just better than others."

Just as food on Shabbat does not taste the same as on a weekday, so is our appreciation of beer influenced by the subjective situation we find ourselves in.

There is a list of "The Top Five Beers in the World" which I just read on the Blog About Beer.  It is a good way to close our first Beer Tasting Panel.

2. The Beer You’re Having Next

3. The Best Beer You Can Remember

5. The Beer You Made