I was in a fine liquor store last week near the Machane Yehuda market in Jerusalem, looking at the beer selection to see if there were any new Israeli beers (there weren't).  A young man was studying the shelves of imported beers, picking up one bottle at a time and looking at the price. 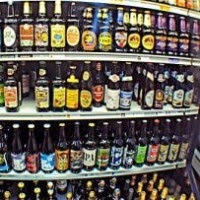 "Do you know about the Israeli boutique beers?" I asked patriotically.  "Yes," he replied, "they're good and I want to buy Israeli beer, but they're so expensive."

"Look," I said, "the prices are about the same as these European beers."

He was not convinced.  "Right," he answered, "but for the same price for the European beer, you get a big bottle, up to a half-liter.  The Israeli beers are all these little 330 milliliter [one-third of a liter] bottles."

He was right.  It's hard to argue on the basis of price for Israeli craft beers.  Suddenly, my eyes shifted to big 750 milliliter [three-quarters of a liter] bottles of Bazelet Beer from the Golan Brewery for only 28 shekels, or two bottles for 50 shekels.  That comes to about 11 shekels for the equivalent of a 330 milliliter bottle.  "Look at this," I crowed, "this works out cheaper than any of the European and American stuff.  And it's great beer."

He held the big bottle in his hand a few moments.  "You're right.  Thanks a lot," he exclaimed, as he walked towards the cashier.

I felt good.  Another victory for Israeli micro-breweries!

I say "another" because a few weeks earlier, in that same store, at that same beer shelf, I saw another guy holding two bottles of Herzl Beer in his hands, the 6% Kapara and the Dulce de Asal.  It looked like he could use some help to make up his mind.

"Both of them are good beers," I volunteered.  "The 6% is milder, with good hops and fruity aroma.  The Dulce has a stronger alcoholic content and is sweeter."

Now what all of this means is that our home-grown micro-breweries can be doing a better job with advertising and marketing.  They have to educate the public to the fact that their beer is not only many times better than the industrial brews, but also their prices are in some cases competitive with imported beers of lower quality.

It's true; they can be working to bring their costs down, and I know for a fact that some breweries are.  Maybe most beer consumers are looking for the cheapest liquid to fill their bellies, the biggest buzz for the buck.  But there always is a market for a higher priced but better product.

Israeli craft breweries have to find a way to reach their potential customers, to educate them about the difference between industrial beer and boutique beer, to entice them into trying a beverage that has nothing in common with "big beer" except a name, and to engage them and keep them coming back for more.