A little ways down on the right side of this web log, you will notice a famous quote by Benjamin Frankin, to wit,


"Beer is proof that God loves us and wants us to be happy." 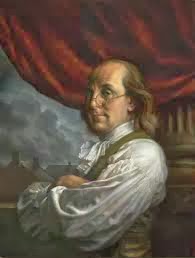 Beer blogs and websites, brewers large and small, and beer lovers everywhere are fond of that quote.  You can see it on posters, mugs and t-shirts and lots of other beer paraphernalia.  It's popular because it sums up our own feelings, especially those of us with some connection to American history and culture.  Ben Franklin's intellect, wit and personality helped shape the American revolution and the society that it built.  His sayings are as much a part of the American heritage as Bible quotations are of Israel's.

Only, Ben never said that one about beer.

In the Urban Legends section of About.com, the brewing historian (why don't I remember that  being a career option when I was in college?) Bob Skilnik, debunks the notion that Ben Franklin ever said that.  Skilnik says that the closest Ben came to that sentiment is in a letter he wrote to Andre Morellet, the French economist and philosopher, in 1779:


"Behold the rain which descends from heaven upon our vineyards, there it enters the roots of the vines, to be changed into wine, a constant proof that God loves us, and loves to see us happy."

So there you have it.  Ben Franklin, that admirer of all things French, was writing about wine.

No matter.  I'm going to keep that beer quote on my blog, because even if Ben didn't say it, he could have.  And after all, no matter who said it first, we can still believe it's true.