I have found that the best selection of Israeli boutique beers in Jerusalem is at HaMisameach, an inviting liquor store on Rehov Agrippas near the Machane Yehuda shuk. One entire four-meter-long shelf is filled with over 50 different kinds of Israeli craft beers from 15 breweries. Trust me: I really counted.

A few weeks ago, I saw what to me were four new beers from Tel Aviv’s Dancing Camel, Israel’s first microbrewery, owner of two brewpubs, an active and creative marketer, and a brewer of a wide assortment of year-round and seasonal beers.

The four new beers were:

Patriot – A pale ale beautifully hoppy with a twinge of sweetness to balance the bitter, and a dose of citrus.

Eve Blond Ale – A very light blond ale with the malt and hops in the background. This is a beer for a hot day, when you can’t just have one.

Midnight Stout – I’m not a stout fan, but I enjoyed this more than its famous Irish cousin. And there really is a chocolaty taste in there.

Olde Papa Babylonian Olde Ale – This is the heartiest of the four. Full of hops and sweetness and high in alcohol (7.5%).

I wanted to know more so I called up David Cohen, the owner and brewmaster of Dancing Camel.

“They’re not new,” was David’s surprised reply. “You’re just seeing them for the first time in the store.

“Midnight Stout is one of our standards, as is Eve Blond Ale. They’ve been around for years. You can read about them on our website.

“Patriot is just a new name we gave to our American Pale Ale. That’s also been around for along time.”

I liked that. I think beers should have personal names rather than just descriptions. After all, they are so complex and individual – or should be – so why not give them real names? 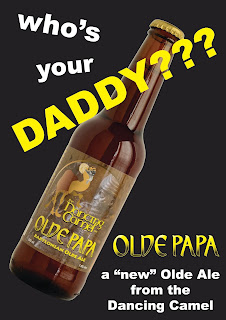 “But the interesting story,” David continued, “is the Olde Papa Ale.

“You know, for several years we have been tweaking our India Pale Ale to accommodate Israeli tastes. We found Israelis prefer a sweeter, heavier beer with more alcohol. So over the years, we have been bumping up the sweetness of our IPA with date honey and darker, caramel malts.

“Just recently, we decided to push the beer out of the IPA category entirely by 1) revving up the alcohol from 7.2% to 7.5%, 2) changing from English to German malts, and 3) changing from American hops to British hops.

“So now we had what was in effect a new beer and we needed a name for it.”

David went on to explain that brewers often look for inspiration and ingredients in their own area and culture.

“There aren’t too many illustrious Jewish brewers,” he said, “but one of the earliest we know of is Rav Papa, a rabbi from the Talmud who lived in Babylon. He had ten sons, founded a famous yeshiva in Neres, and apparently became quite wealthy from brewing and selling beer.”

Rav Papa brewed a beer called “sudny” which was made with date honey. Since that ingredient was already being used in the Dancing Camel “revised” IPA, they decided to name the new beer in memory of Rav Papa.

All my questions were answered. 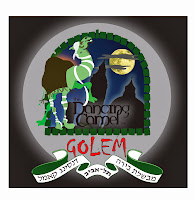 “However,” added David, “you should have also seen a fifth beer in HaMisameach – Golem.”

He was right. Bottles of Golem were on the top shelf. This is a super beer. I tried it last summer after my friend Bob Faber bought me a bottle at the Mateh Yehuda Beer Festival. At HaMisameach, a 750 milliliter bottle costs a hefty NIS 49, but it’s worth it. Golem is a beer to savor. I call it IPA on steroids. It’s dark and strongly hopped, 11% alcohol with rich flavors that put most other beers in its dark shadow. My neighbor Moshe Lifshitz says, “it’s like drinking two beers at once.” I was happy to learn that Golem is on sale in stores and not just at beer fairs. If you see it, and you love strong beer, buy a bottle and give yourself a treat.
Posted by Doug Greener at Saturday, November 16, 2013