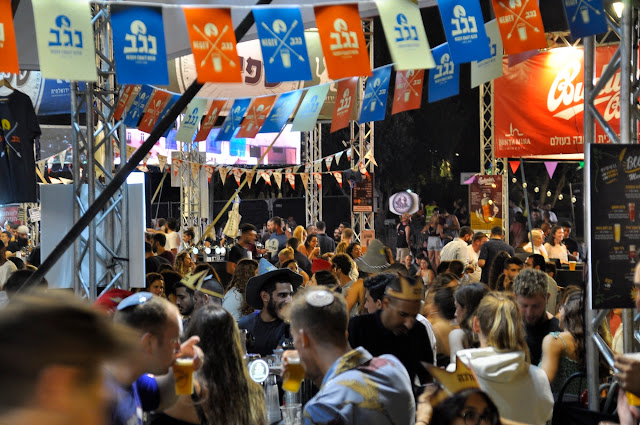 The 15th annual Jerusalem Beer Festival ("Ir HaBira") went on for two nights at the end of the summer.  So did I.

The first night I went with photographer Mike Horton and members of the Israel Brews and Views Tasting Team to press some flesh, seek out some new beers (while not ignoring the old) and simply have a good time.

Our thanks to Eli Giladi of Giladi Productions for facilitating our attendance.

For people who were offered (and accepted) beer at every booth, the team really got around.  We visited and tasted beers from: 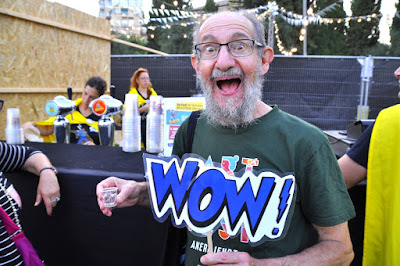 With so much good Israeli beer on tap, we gave our livers a break and steered away from the many imported brews which were also being offered.

We found a few new local beers which held our attention, at least as long as we were drinking them.

Oak & Ash led off with their two latest beers, served with pride by owner/brewer Asher Zimble.  (Asher now contract brews his beer at the HaGibor Brewery in Carmiel.)  These are the New England IPA (NEIPA) and Coco Porter, now available in bottles at beer specialty stores.

The Alexander Brewery debuted their new Saison with a label reflecting Rene Magritte's famous Son of Man painting, but with a hop cone instead of a green apple obstructing the man's face.

[You can read my recent reviews of the Oak & Ash beers and the Alexander Saison, including fascinating background information, here.]

If you want to taste the new Negev Lemongrass, you have to have it on tap at the brewery in Tefen or at some branches of Beer Bazaar.  It's basically Negev's Oasis beer infused with lemongrass, making it spicy and refreshing.  The lemongrass flavor is not the same as lemon, but brings in elements of grass, lemon zest, citrus, spice and even ginger.  It's on the bitter side of the spectrum, but not by much.

The only other new beer we tasted at the festival was a Cherry Beer from Ronen (Srigim Brewery).  Made with cherry extract, it's a deep red color with the aroma and flavor of  . . . cherries.

Brewery owner Ofer Ronen was on hand, and he explained to me that the trick here is to keep the cherry presence while having enough malt and hop backbone so there's no doubt that you're actually drinking a beer.  If "fruit beers" lose this balance you can end up with a kind of a sweet, fruity beverage.
Ronen's Cherry Beer seems to handle this balance very well, but I personally am not a big fan of fruited beers -- unless they're in the sour spectrum.

If you notice a pattern here -- fruit juice, coconut, lemon, cherry -- so did we.

Our tongue-wearied Tasters were getting frustrated: "Enough with the fruit.  Where's the beer?"

In point of fact, we did drink some fine "traditional" beers, both ales and lagers, but these were not among the new launches.

I shepherded Erica and Dennis around to the interesting beers and brewers, and also appeared a little bit on camera myself.  We had a great time -- I must say especially Erica, who was new to the world of craft beers.

We filmed for almost three hours and the edited, final video was all of three minutes!  I'm told this is
quite the norm for such video reports.

If you haven't yet seen it, please click on the link below.  You'll get some idea of what makes the Jerusalem Beer Festival such an remarkable annual event.