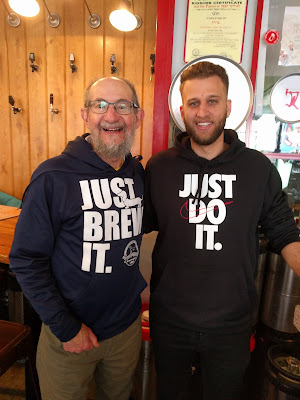 Last week was an opportune time to have beer with friends and to meet up with successful barkeepers.

First I went with fellow Beer Panel taster Bob Faber to the Bardak pub near the Machane Yehuda market for some vegan pizza and Jem's Amber Ale.  Bardak partner Dor served us, and Bob took this photo:  Dor just does it and I just brews it. 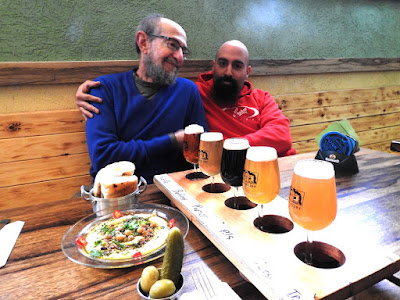 Then I went with Israel Brews and Views photographer Mike Horton to Beerateinu for the Jerusalem launching of six Mikkeller beers from Belgium.  We tasted all six in stylish 200 milliliter glasses.  Fine beers, but four of them -- the two IPAs, the Pale Ale and the Lager -- are already well represented here by Israeli craft brews which are different in degree but not in kind.

However, two were really different, at least in the Israeli context: A Berliner Weisse, a sour wheat beer in this case made with passion fruit, and a Chipotle Porter, slightly smoky and spicy from the chipotle peppers.

Of course, Mike had his camera handy and caught Beerateinu partner Shmuel Naky and the old blogger reflecting light from the top of their heads while contemplating the Mikkeller beers, some spicy hummus, and an artistically arranged pickle and olives.
Posted by Doug Greener at Monday, April 01, 2019