In the U.S., India pale ales have maintained their position as the most popular craft beer style.  It's safe to say that every one of the more than 7,000 micro-breweries makes at least one.  The same thing is happening in Israel.  Here are three of the newest: 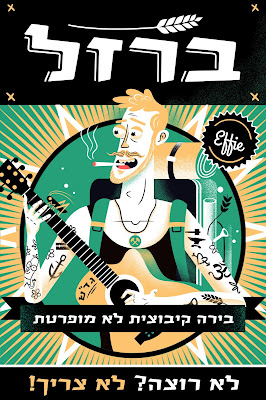 Barzel Beer of Kibbutz Ha'ogen (but contract brewed at the Alexander Brewery in Emek Hefer) has come out with an IPA called Effie.  It pours out a clear, light amber, the color of dark straw.  Although actively carbonated, the head is thin.

IPAs are generally characterized by hop aromas and tastes that can be fruity, citrusy, piney and resinous, flowery, or some other interesting combination.  Effie has sharp aromas of pine and lemon, and bitter tastes of grass, apricot and tropical fruit/mango.  The finish is dry and bitter, which makes you want to keep drinking.  The alcohol by volume is a moderate 5.5%.

Effie is light bodied and full of taste; typically a good summer beer, but with flavor enough to hold its own with a warm winter's meal.  It was our favorite of all the Barzel beers.

The new Negev IPA (brewed at the Malka Brewery in Tefen) is an India pale ale which recognizes the limits of Israeli popular tastes.  With American and European IPAs competing with each other to reach new heights of intense hop flavors and bitterness, the Negev IPA is surprisingly delicate, avoiding the extremes that Israeli beer drinkers tend to shun.  ABV is 5.8%.

It's a clear, light amber color, with almost no head after our pour.  There's a light hoppy, indistinct aroma, close to citrus (orange), yeasty, piney, and some sweet toffee.  The taste is also what I would generously call "mellow."  Mildly bitter with some citrus, pine, herbs and grain.  It's an enjoyable enough beer, but I think Israeli tastes these days are ready for something with stronger hop flavors and bitterness. 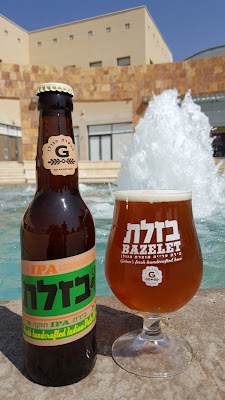 A step in this direction was taken by the Bazelet IPA from the Golan Brewery in Katzrin.  The Golan Brewery rarely comes out with a new beer style, and this IPA is a good choice.

At 7% alcohol, it's the strongest of this new batch of IPAs.  It's a hazy amber color with a miniscule white head.  There's a nice hoppy aroma of citrus and pine, yeast, pineapple, lemon and some malt.  With the taste, you get more citrus, tropical fruits and apricot, blending into a short, bitter finish.  This is the kind of crescendo I'm looking for in an IPA.
All of these IPAs go classically with strong, spicy foods like curries, pizza, milder cheeses, and sweet desserts.

I have little doubt that Israeli craft breweries will give us even more India pale ales as the new year rolls along.
Posted by Doug Greener at Thursday, January 24, 2019