Weekend on the Mystic Mountain

The Galilean, mountain-top city of Safed (in Hebrew, Tzfat) has had a mystical reputation for centuries.  Here, the writers and practitioners of the Kabbalah laid the foundations of Jewish mysticism in the 16th century.  Safed, on a cloudy morning or at twilight, has an ethereal, other-worldly demeanor unmatched by any other city, including Jerusalem.

On a recent weekend, my wife Trudy and I joined our friends Yitzchak and Pnina Miskin in riding north to Safed to continue our wonderful tradition of hiking, visiting a local brewery, and spending a quiet Shabbat.

The only mystical encounter we had was with beer – the Mystic Mountain Craft Brewpub.

After a three hour bus and car ride, we arrived at the destination for our Friday morning hike: Mount Meron.  Yitzchak had meticulously planned and coordinated our route down to the last minute.  We were going to trek three kilometers (almost two miles) around the mountain peak in about two hours.

Alas, the weather had other plans.  Israel's first cold and rainy morning of the season bared its teeth after we had taken a few steps.  We retreated back to the car, waited a few minutes, observed other would-be hikers similarly retreating, and drove to our hotel – the Artists' Colony Inn in Safed.

The weather cleared up enough for us to take a short walk through Safed's picturesque Old City, stop for a falafel lunch, and head for our (or maybe just my) main attraction – the Mystic Mountain Craft Brewpub.

Even though the taproom and brewery is usually closed on Friday afternoons, owner and brewer Andy Alpern agreed to meet us there so we could see the place and taste his beers.  We had a lot to thank him for.

We knew that the Mystic Mountain Craft Brewpub was at 2 Revitsky Street, but it wasn't easy finding it in the rabbit warren of alleyways and stairs that are Safed's Old City – even using Yitzchak's hand-held GPS system.  Finally, Andy had to come out and find us.  The morning storm had knocked down one of the signs that would have led us to him.

Andy welcomed us to his cavernous taproom – a converted house over 200 years old, making it the oldest beer hall in Israel and perhaps the Middle East!  It contains several different sections and an eclectic collection of tables and chairs.  The main room has a warm and comfortable bar where Andy served us his beers while telling us his story.

He immigrated to Jerusalem from the U.S. in 1997, having lived there in a few places, most recently Chicago, Colorado and Eugene, Oregon.  Andy, who is married with three sons, 11, 9 and 4, came to Safed in 2006, planning to pursue a career in his chosen profession, photography.  In fact, around five years ago he began to rent the location which became his brewpub to use as a photography studio and gallery.
"I started making wine at home," Andy explains.  "After all my vines died from a virus, I used the demijohns to brew beer, which I learned online from the Siebel Brewing Academy.  When I moved into this building, I had the space to increase my brewing to 100-liter batches and to start serving people."

Like I've heard a dozen times before, the brewing became more and more of a passion for Andy, starting to rival his love for photography.  He spent a month cleaning up the studio ("It was very hard physical work.") and turned it into the Mystic Mountain Craft Brewpub.  It wasn't long before it became a favorite meeting place for the small but conspicuous English-speaking community in Safed.

The brewpub is now open on Tuesday and Thursday nights, and Andy would like to add Saturday night as well.  Most nights there is live music to accompany the beer and light food menu.  Andy himself often plays the guitar with a local group.

Andy now brews in 100-liter batches, and almost all of his beer is put into kegs for selling at the taproom.  "I tried contract brewing in another brewery," he explains, "but that didn’t work out.  First of all, it was very expensive, and second, I wasn't brewing the beer!  It never came out the way I wanted.  In Safed, which is a pretty small city after all, if you want something done, you have to do it yourself!"

Andy regularly brews five Mystic Mountain beers and one cider, which we all enjoyed at the bar.

Ex-Pat Pale Ale – An American pale ale, 5.7% alcohol by volume, brewed with three kinds of hops and dry-hopped with two.  Very hoppy with tastes of citrus.

Holy Hefe – A German-style classic wheat beer, with the clove, spice and banana aromas you're looking for, but also other fruits.  Hefe means "yeast" in German, and this style of beer is known as Hefeweizen. 5.5% alcohol.  I don't like to stereotype or typecast, but this beer was Trudy's and Pnina's absolute favorite.

Andy also brews a seasonal wheat beer called Red Hefe, made with organic tart cherries from the Golan Heights, but this was not available when we were there.

Dark Star – A true Dunkelweizen, a dark wheat beer, made with 70% malted wheat.  Very creamy with a roasty flavor.  5.8% ABV.

Granola Stout – Mystic Mountain's oatmeal stout, made with organic oats, cinnamon and cloves, as well as other spices.  A strong 7% ABV, it has tastes of cinnamon, chocolate, caramel and fruit.

After our tasting session, Andy admitted that he was at a crossroads.  On the one hand, he would like to pass on some the daily responsibilities of brewing and running the brewpub to a manager, so that he can get back to concentrating on his photography and other projects.

On the other hand, he loves his brewing and publican activities and would prefer not to abandon them.  Only recently, he was presented with the possibility of buying a 200-liter brewing system.  "If I do this, which is very tempting, then I will have to spend more time, not less, on brewing and selling beer," Andy says.  "It's not an easy decision for me to make, but I have to do it."

Before we left, Andy was able to find us a few bottles of his beer, which we bought to have over Shabbat and to take home.

We thanked Andy for his hospitality and beer and left him to ponder his future direction.  The four hearty travelers were unanimous in their opinion that the Mystic Mountain Brewpub is a wonderful beer destination and an invaluable asset for the city of Safed.  Nothing even comes close in the whole area, where locals and tourists can enjoy hand-crafted beer surrounded by history, music and friends.

It was a good thing that it was a short walk from the Mystic Mountain Brewpub to our hotel, because all the beer we had tasted was having its effect.

That evening we had dinner with our host, the hotel owner and his daughter.  We were joined at the table by a couple from Holland who were visiting family in Israel.  Lively and interesting conversation all around. 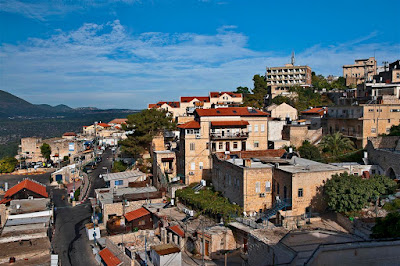 The next day was bright and sunny.  After a delicious breakfast at the hotel, we joined Yitzchak and Pnina for a walk through the Old City of Safed, closed down because of the Sabbath, and a hike outside of the city.  We made up for the Friday morning rain-out by hiking four kilometers (2½ miles) heading north on the western slope of Mount Canaan, atop of which Safed is located.  A lot of our attention was taken up looking for a famous spring, which we couldn't find.

We returned to the hotel for a well-earned rest and then had a hearty home-packed lunch, crowned by some of the beers we brought from the Mystic Mountain.

This is a lovely pattern for touring Israel that we would like to continue and which I strongly recommend to others: Vigorous Friday hike, visit to a micro-brewery, relaxing and nourishing Shabbat.  There are so many beautiful locations to visit in Israel, and more and more of them have nearby breweries.  Coincidence?  I think not.
Posted by Doug Greener at Tuesday, November 13, 2018