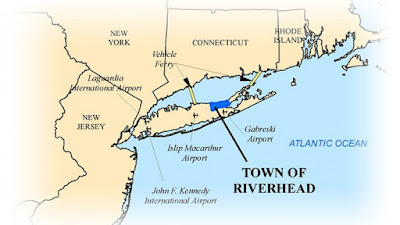 The next stop on my U.S. breweries tour was Riverhead, New York, located on the eastern end of Long Island, that fish-shaped isle which incorporates Brooklyn and Queens in the west, Nassau County in the center, and Suffolk County in the east.

In Nassau and Suffolk Counties alone,  there are today no less than 32 craft breweries.  According to many press reports, these breweries -- and all craft breweries across America -- are doing their part to revitalize their towns' economic fortunes.  "Build a craft brewery," the Associated Press wrote, "and urban revival will come."

I was visiting my friends Len and Abigail at their home in nearby Westhampton for the weekend, when Len said that Riverhead, a small, unexciting town of 33,500 souls, had three craft breweries.

"Wouldn't it be a good idea if we could visit all of them before the Sabbath?" Len wondered.

I was not inclined to decline.

We decided to bring some food to have with the many beers that were awaiting us.  We stopped in the Pera Bell Food Bar on Main Street to buy some sandwiches and pizza.  We told the Mixologist-Manager David Chiarella about our mission and he insisted we start having beers right there in his establishment.  After all, it was a dark and rainy afternoon with almost no one on the streets; perhaps he feared we would not find the breweries and end up empty handed.

NOFO Farmhouse Ale, a saison style beer from the Long Ireland Brewery right there in Riverhead.  Typical saison yeast aromas of spice, some cloves, and malt.  The taste is sour apple, but also with a sweet note, maybe honey.  (Hey, Rosh Hashana!).  The finish is crisp and spicy.

Honey Robber Cream Ale from the Blue Point Brewery in Patchogue, Long Island.  This is a spring seasonal beer brewed with honey.  Starts with a lush aroma of cream soda (vanilla and caramel), and a vegetal, acerbic taste, also malt sweetness, honey and light spicy hops. 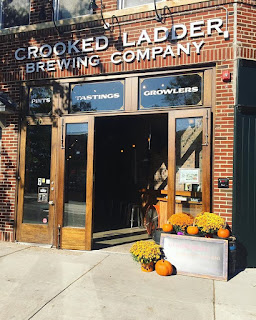 Thus fortified, Len and I drove through the foggy streets of Riverhead to the Crooked Ladder Brewing Company.  We found the tasting room filled with warm, friendly people, but unheated.  Luckily, we knew how to drink with our coats on.

The brewmaster Stevie Czelatka welcomed us and invited us to spread out our feast at the bar while he served up his beers.  We took the $10 "Everything on Tap" flight, which included a souvenir pint glass.

First up was Southampton Light, a 3.6% ABV American light lager, which was perhaps a tastier version of the mass produced lager beers that Americans consume by the lakefull.  There was no problem with it clashing with the flavor of our food.

Next was the Southampton Keller Pilsner, a refreshing and hoppy German-style Pilsner lager with 5% alcohol.

Going up in strength, we then had the Southampton Double White, a Belgian witbier (7.2% ABV) with ample wheat flavors plus citrus.  Len found a note of banana in the mix as well.

The Southampton Secret Ale was in the classic "altbier" style of a German brown ale.  Even the "Secret" in the name is a translation from the "Sticke" style of strong altbier.  It was a dark copper color, with a roasty or nutty malt flavor, smooth mouthfeel and crisp finish.  The hop presence was very low in this 5.2% beer.

Our next tasting, the Southampton Imperial Porter, had a full body and rich taste that I really appreciated.  It was a very dark brown with no head of foam and high in alcohol -- 7.2%.  The flavor was dominated by dark chocolate, but also with some caramel.

At any rate, the next beer was a Crooked Ladder original -- "Outta My Vine" -- an out-of-season pumpkin ale.  This was full of the pumpkin pie taste that craft beer drinkers seem to love or hate.  Brewed with pumpkin, cinnamon and fresh ginger, it was brown in color, 5.7% alcohol, with a strong cinnamon aroma and tastes of cinnamon, nutmeg, ginger and roasted malt.  Like I said, pumpkin pie.

Our last tasting was an IPA -- "It Was All A Dream" -- a wheat IPA, hopped and dry hopped with Citra, Simcoe and Amarillo hops, mouth puckeringly bitter with citrus flavors.  5.5% ABV.

Another of Crooked Ladder's IPAs, the 70 West IPA, was apparently the most popular and not surprisingly, sold out.  We actually saw customers walk in, ask for the 70 West, and then walk out when told it was all gone.  Didn't even say, "Well, let's try something else as long as we're here."  Just walked out.  Talk about brand loyalty! 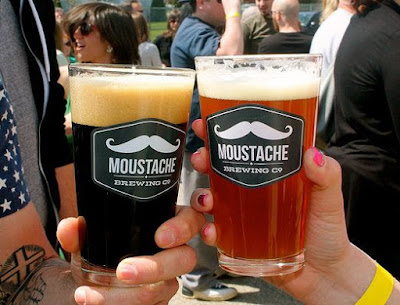 Len and I weren't suffering from jet lag after that flight, and in fact were still pretty thirsty.  So we thanked Stevie for his hospitality and commentary, and headed off to our second destination -- Moustache Brewing Co.  It was still chilly and rainy and also much darker, which we neglected to take into consideration.

The lights and gemütlichkeit in the Moustache taproom deflected our attention from the gathering dark outside.  We had every good intention of arriving back home to Abigail by the start of the Sabbath, but there was certainly time for one more beer.

We had eight.  Owner and brewer of Moustache, Matthew Spitz, and his wife Lauri greeted us on this, the third anniversary of the brewery's opening.  Matthew said he was very satisfied with Riverhead's reception.  "The town knew what to do with a brewery, what we needed, and what we could bring to the community."

Len and I were joined in our tastings by Lori Mills and Scott Zoldak, the self-crowned "Hoppy Couple," whose very excellent pastime is visiting breweries and taprooms and aiming to taste all the beers they can find.  Our paths crossed at the Moustache.

Here again, we took the flight:

First up was Sailor Mouth, a 6.5% IPA double dry-hopped with Comet and Amarillo hops.  It had a strong citrus and spice aroma, and a bitter spice taste that stays with you at least until the next beer.

And that was Rally Beard, a double IPA, 8.8% in strength, reddish amber, heavy on the full range of citrus flavors.  A thoroughly tasty and enjoyable drink, Len and I agreed.

With Wanderlust ESB (Extra Special Bitter), we figuratively crossed the nearby Atlantic to the style of British amber ales.  This was 6.3% alcohol, given a mildly bitter character with American hops, and whose taste was halfway towards being a porter.


"Get Up On Outta Here" was a strong (8.5%) IPA brewed with Hüll Melon, Mandarina Bavaria and Motueka hops.  It had an aroma of citrus, tropical fruits and fresh earth, and strong citrus tastes.

Number five was Milk & Honey, a brown ale (it's actual color was reddish amber) made with lactose (milk sugar) and honey.  I couldn't help comparing it to Israel's own Milk & Honey stout made at the Alexander Brewery in Emek Hefer.

Life of Leisure was an American pale ale brewed with Glade hops, which had a nose-filling floral aroma.  5.7% ABV.

Everyman's Porter, 4.5% alcohol, was a tasty, solid porter, nothing special, with the requisite chocolate and coffee notes.

Patiently waiting for us at the end of the line was a super beer -- Blueberry Ginger Triple, brewed of course with fresh blueberries and ginger, and aged in barrels previously holding Woodland Reserve bourbon whisky.  The alcoholic strength (10.6%) only enhanced the powerful and enticing blueberry element in the aroma, and kept pace with the delicious tastes of blueberry and ginger.

Len and I were savoring every sip of this one, when we noticed the night outside the windows.  We thought of Abigail waiting for us at home with growing impatience as the Sabbath meal she had prepared got colder and she got hungrier.  We felt like bad boys who had stayed out too late -- which we were.

All plans to visit the third brewery -- Long Ireland -- dissolved in our guilty consciences.  That would have to wait until next time, which meant, as it turned out, my next visit to America. 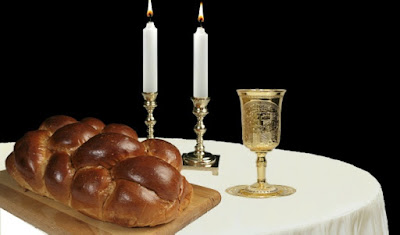 It was already the Sabbath when Len and I arrived back home.  It took Abigail a long while to forgive us, not only for being late but for not having called her to let her know.  It would have been too easy to blame the beer.  Len and I were suitably embarrassed and ashamed.

Eventually, we all gathered together around the festive table to celebrate the holy day.

Len and I would be visiting more micro-breweries, but these would henceforth never be scheduled for a Friday afternoon.

Join me in the final installment, when we take a subway to a brewery in the Bronx, the borough where I was raised and hadn't been back to for maybe 50 years!
Posted by Doug Greener at Wednesday, December 27, 2017