I timed my last trip to America so the weather was bearable in southern Florida and less than frigid in New York City.  I visited my mom who was about a year short of her century mark, my eldest son, my brother and my cousin in Florida, and various friends in NYC.  While there, I tried to make it a vacation, but ended up working.  I visited four craft breweries and one craft distillery.  Thus are the interminable obligations of a beer blogger.

From my mom's home in Deerfield Beach to the Bangin' Banjo Brewing Company in Pompano Beach is just a short ride.  I exploited the driving skills of my visiting son Ami (from Washington, DC) to get us over there. 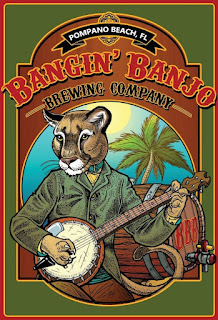 Waves of migration of northerners fleeing from the winter (but right into the path of hurricanes) have taken southern Florida out of Dixie.  Yet the Bangin' Banjo, which opened in 2014, had a real down-home feel to it.  The taproom was just an extension of the brewery, lacking all but the minimum accouterments for selling cold beer.

I had called the previous evening and introduced myself to the co-founder, Adam Feingold, and arranged my visit.  Adam said that Ami and I would be very welcome at the bar, but that he himself wouldn't be there because of a family event.  He told me that the bartender, Cameron Donisi, would be happy to host us and tell me anything I want to know about the beers.

Tattooed, bearded and burly, Cameron was a jolly bartender who'd been pumping beers at the Bangin' Banjo for a few years.  I don't think he'd get sore if I said he was built for the part -- at least I hope not.  But he would shortly be leaving, he said, to become head brewer at the new Prosperity Brewers in Boca Raton, a few miles up Florida's east coast.

To experience a wide range of the Banjo's brews, Cameron suggested that we take the flight of six beers, so we enthusiastically agreed.

Perry's Pineapple Gose is a 4.4% alcohol gose-style sour beer brewed with pineapple juice.  Cameron explained that gose beers and New England IPAs are two rapidly-trending styles in the U.S., and Perry's Pineapple Gose combines the best elements of the two: tangy, salty, refreshing, fruit juicy, and not especially bitter.  Oats and wheat in the malt bill add a creamy finish to this beer.

Since this was before I began to take sour and "wild" beers seriously, I didn't enjoy this beer as much as I should have, though Ami thought it was delicious.

Our next beer was Hop Jam: Session No. 1, an American IPA whose bounteous hops (including Azacca and Vic Secret from Australia) were full of non-citrus aromas and flavors, such as quava, apple and mango.  A fine IPA with a 7.1% ABV kick.

Next in line was an Imperial Red Ale named Studious Judious, 8% ABV, made with copious amounts of red malt, yet maintaining a delicate balance between the hops and the malt.  Looking back after we finished all the beers, this was my favorite of the lot.

Number five was Chocolate Covered Peanut Porter, a black-as-night porter with a delectable aroma of chocolate (from the malt and added cocoa nibs) and peanut butter (from chopped peanuts added to the secondary fermentation).  Vanilla beans were also added to the brew.  4.9% ABV.

Last was Overcast Shadow, a 9% Russian Imperial Stout that gave a strong, sweet finish to our stay at the Banjo.  This beer had luxurious flavors of chocolate and coffee, with chocolate dominating.

The taps at the Bangin' Banjo are constantly changing, so don't expect to find the same beers I had if you get over there.  I think it's safe to say, though, that you'll find the same basic styles.

Ami and I had a delightful father-son experience exchanging our opinions of the beers, and chatting with the other patrons.  One of them was an executive in a company which provides solutions for bringing clean water to villages in the third world, something which Ami was familiar with because of his background in environmental planning.  I suggested that beer would also help solve the problem of having something healthful and clean to drink, but I was voted down by the experts.

Drinking at the Bangin' Banjo was a great way to enter the world of American craft beer taprooms -- and I still had plenty to look forward to as I headed north.