Winners of the LongShot and Golden Beer competitions

Last week the winners were announced of two prestigious brewing competitions in Israel:
The Samuel Adams LongShot competition for home-brewers and the
Golden Beer 2017 for commercial craft brewers.

The Samuel Adams LongShot contest is the oldest in Israel for home-brewers and it has given impetus to several of them to take their brewing to the next level -- whatever that may be.  It's sponsored by Samuel Adams Beer in Boston and Tempo Beer Industries in Israel, and is under the professional direction of the Beer-D center in Tel Aviv.

I'll just list the winners here because 1) they haven't been announced in English yet, and 2) I haven't tasted any of them. 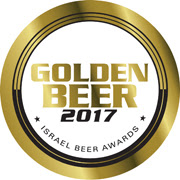 From the eldest to the youngest: The first Golden Beer competition awarded 26 prizes to 97 beers that took part.  (That's better than a one-in-four chance of winning something.)  These had to be commercial beers, that is, produced by brewers with a legal production license.  The organizer was the Ben Ami Studio, the same agency which produces the annual BEERS Exhibit in Tel Aviv.

Cynics would say that the organizers were getting in on the wave of beer competitions which seem to be springing up all over the place.  I'm not (much of) a cynic, but I naturally recoil from calling the winners, as the competition's PR did, "the best beers in Israel."  A little humility is in order, as is a little space for beer lovers to decide for themselves.

That being said, the winners are still to be congratulated for being judged by a jury of their peers and succeeding.

Here, then, are the winners of the Golden Beer 2017 competition: