Whew!  If it wasn't for the beer, it would be overkill.  I spent 20 hours at the Jerusalem Craft Beer Fair at the First Station  -- well, pausing only to go home to get some sleep.  Beginning at 6:00 p.m., I made the rounds of the commercial micro-brewers, tasting seven of their new beers.  Then, the following morning. I was back to sample the wares of home-brewers who had entered the Beerateinu home-brewing competition, staying until around 2:00 p.m.  Like I said, 20 hours.

The Fair and the brewing competition were both organized by the dynamic and knowledgeable co-owners of Beerateinu, Shmuel Naky and Leon Shvartz.

For the evening sessions, Shmuel and Leon asked the exhibiting brewers to bring something "new" for the Fair.  A great idea.  Otherwise, returning attendees merely get to taste the same beers they had at the previous Fair.  (Of course, for new visitors, particularly those being introduced to craft beer for the first time, this is not a problem.) 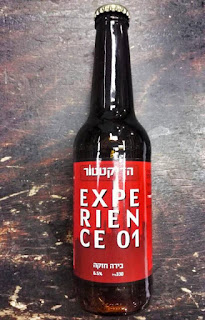 The first smiling face we encountered was Yotam Baras, serving his Dictator beers.  In addition to his core beers (English Bitter, Pale Ale, Irish Red and Porter), Yotam was offering Experience 01, an "experimental" bottled beer that blended the Belgian Double and IPA styles.  What can I say?  It was certainly a successful experiment, in fact, the best new beer I tasted that evening.  It was complex and rich, malty, sweet and bitter -- in suitable proportions.

Made with Chinook, Amarillo and Willamette hops, the 6.5% ABV beer poured a very dark brown and had an aroma of caramel and some fruit, possibly cherries.  The taste was on the sweet side, spicy and alcoholic -- definitely more Double than IPA.  Though there was no taste of hops or yeast that I could detect, there was a gentle chocolate malt that I found yummy.  The finish was bitter and dry.

Bottom line: a new and different beer that is definitely worth trying, and as I said, is available in bottles at most beer specialty stores.

One stand away was another experimental beer on tap, from the Fass Brewhouse on the Golan Heights, served by Hagai Fass, one of the brother-partners.  This beer was named Shaike, a 3.8% ABV light lager in the Pilsner style.  It was indeed light and refreshing, with a neutral taste that would go well with many foods, or with none.

Hagai told me that he and his brother Orr have been brewing beers that they themselves like -- something you hear from many other brewers.  Shaike, on the other hand, Hagai said, "may not be to our taste, but it's a beer that other people love."  And, I suppose, light lagers will never go out of style, but in my opinion, it's the stronger and more complex tasting beers that are firing the craft beer renaissance in Israel and elsewhere.

Next door was the booth of the Glen Whisky Bar, a Jerusalem establishment owned by Leon Shvartz, who is also the Beerateinu guy.  His partner in Beerateinu, Shmuel Naky, is quite a beer conoisseur and a talented brewer in his own right.  Shmuel was offering anew beer he just made, on sale at the Glen Whisky Bar, called Glengili.  It was a dunkelweizen, a dark wheat beer, made with caramel malt and 60% wheat malt.  Shmuel never ceases to amaze me.  Glengili is a rich, complex beer with bready aroma and a taste that reminded me of chocolate French toast -- even though I never had chocolate French toast!

Yair Alon of Barzel Beer (contract brewed at the Mosco Brewery on Moshav Zanuach) greeted us next.  You can find Barzel now in plenty of beer and liquor stores.  The original beer is a Belgian-style strong ale which is constantly being tweaked by Yair and his co-brewers, Ori Granot and Idan Talyas, and, it seems to me, just keeps getting better.

The current version is a 6% ABV Belgian Red Ale, reflected in its dark red amber color with almost no head.  The aroma is a promising fruity and yeasty, and indeed the taste is creamy sweet with spices and cooked fruit, reminding me almost of those winter holiday ales with pumpkin pie spices.  The finish, however, turns bitter and lasts long, with a very smooth texture and thick body.  I call this a delicious beer, though my drinking partner Moshe thought that it "tried to do too much in one beer."

The new beer being unveiled this night by Barzel, however, was a Ruby Wheat, which is now available where Barzel is sold.  As its name says, Ruby Wheat has a hint of a reddish hue, a result of red caramel malt.  Yair said that the malt also adds sweetness to the beer, but I was hard pressed to find that.  What I tasted was a classic German wheat beer, 5.5% ABV -- with a little color added to its cheeks.

It pours a very cloudy burnt orange color, and has a fresh wheat beer aroma -- cloves and banana -- but also some caramel and grass.  You get more caramel and yeast in the taste, along with some berry and sharp spice.  Moshe thought there were some notes of oatmeal in there as well.  The finish is mid-bitter, very dry and refreshing.  Since I am not a fan of wheat beers to begin with, I was not very impressed with this beer.  The Barzel original is much more to my taste!

Next in line was HeChatzer Brewery (Back Yard Beer), manned by Yochai Maytal, one of the three partners.  HeChatzer currently markets only one other beer on a regular basis: Kruso, an American pale ale brewed with mango at the Srigim Brewery.

Their new beer tonight was Hophead, a 6.8% American IPA, now on sale in beer stores.  It's a "limited edition" -- they only made one batch, so when the bottles run out, that's it.  The HeChatzer brewers started making IPA as a home-brew years ago.  It even won first place in the IPA category of the B'tsisa competition in 2013, before I began writing this blog.  But Yochai assured me that this early version was very different from today's Hophead.

In Yochai's opinion, Hophead avoids the extreme bitterness that is so popular in IPAs today.  "It's much more for first-timers whom we don't want to frighten away," he says.  "People who haven't tried IPA yet."

Unfortunately, that was not my tasting experience.

Hophead pours out the color and clarity of ginger ale.  You're hit immediately by the powerful citrus and pine aromas from the hops (Citra and Cascade), nuanced with grapefruit and grassy notes.  There's also juicy citrus fruits and mango in the taste, but these have to compete too hard with the bitterness.  This seems a pity, because you can definitely sense that these could be very enjoyable flavors -- if they could just get out from under the bitter blanket.  The dry and bitter finish, however, is refreshing and appreciated.

Yochai gave me one more "scoop" -- HeChatzer is bringing out Israel's first commercial gose (say it goes-uh) beer in July.  This is a German-style sour beer, tart and fruity and just right for a refreshing summer drink.  While growing in popularity around the globe, gose has yet to be found in Israel.  It may take a while to develop a taste for sour beer, but the same was true for the bitterness of IPAs.  We are waiting with great hopes!

From HaDubim (The Bears) Brewery of brothers Rotem and Dagan Bar Ilan, comes an experimental American pale ale, apparently for this Fair only, called Experiment 123 (makes sense to me).  This was a tasty APA, strong as it should be, but with a very noticeable malt sweetness and a whiff of jasmine flowers.  I would like to see it bottled, but for the meantime, HaDubim are only marketing their two core beers: Phoenix IPA and The Doctor, an American pale ale.

Omer Basha and Dvir Flom from the Basha-Flom Brewery were there with a new smoked lager called La Bacon -- and, damn, that's exactly what I remember bacon tastes like.  Well, what you really taste is the smokiness, not the meat itself, and this comes from the 96% smoked malt which is used in the brewing process.  La Bacon is then lagered for one-and-a-half months.  The result is a smooth, flavorful beer that takes your beer appreciation in a new direction, something that Basha-Flom does with surprising regularity.

I understand there are several craft beers made over there in the U.S. with real bacon, but Basha-Flom have captured the taste without killing any pigs.  La Bacon will not be bottled, so don't look for it in stores.  I just wanted you to know about it.

The last stand at the Fair wasn't beer at all, but whisky from the Golan Heights Distillery in Katzrin.  "Why not?," said owner David Zibell.  "Beer drinkers also like distilled spirits."  David and his wife Alona were serving two whiskies and two araks -- a Gold Label Arak made with star anise (from Egypt or Turkey) and aged for six months, and a Green Arak, made only with anise seeds.  Both are excellent.

The Single Cask Whisky, a Scotch-type, will be available in September of this year.  They are also making an American-style Bourbon Whisky which is 60% corn, 30% rye and 10% barley in the grain mash.  This is still being aged until 2018, when it might be most opportune to try an Israeli-made Bourbon.

Still to come -- Part Two: The home-brewers and competition winners at the Jerusalem Craft Beer Fair.  Stay with us.
Posted by Doug Greener at Thursday, June 01, 2017