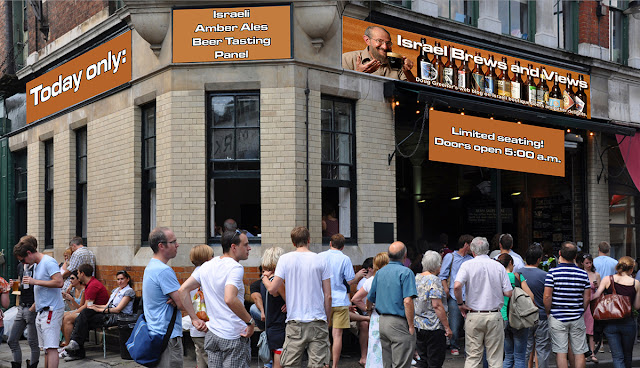 Our very august and robust Israel Brews and Views Tasting Panel met on a recent summer night to taste and rate seven Israeli-brewed amber ales.  We are honored to bring the results to you -- the beer-loving public.

This time we had a full complement of ten judges, whom we can really say represented the tastes of the Israeli public -- masculine and feminine, young and old, urban and rural.  To have had a panel more representative, we would have had to hold elections.

Amber ales are the duskier cousins of pale ales, or more accurately, American pale ales.  To get the amber color, which can appear in a range of shades, a darker malt is used.  Although amber ales can have strong hop tastes, they are usually better balanced with malt than pale ales.

When our Tasting Panel chose amber ales, I was concerned that this style would be a kind of nondescript way station between a pale ale and a porter, without real distinguishing characteristics.

I was wrong.  The amber ales we tasted had a variety of colors, aromas, tastes and bodies which made the judging quite enjoyable.  Speaking in the royal "we" (as they usually do), several of the judges told me afterwards that these beers were the best group of any of our tastings.

Four of the seven beers we tasted are from what I would call major craft breweries, available in stores throughout most of the country.  The other three breweries are smaller, not so readily available outside of their local area, but are seriously working on expanding their marketing and distribution.


As with our past panels, our tastings were completely blind.  All glasses just had a number on them, corresponding to a beer which only the servers knew.  The judges recorded their impressions on a specially prepared page and when they were finished, gave each beer a ranking.  The best beer received seven points, number two got six points, and so on.  All the points given to each beer were counted to obtain the final rankings.

Unlike the results of our last tasting panel, for porter beers, this time there was a very clear winner . . . and a clear loser.  The middle five beers were separated by only seven points.  Eight judges gave the winner high points, and eight judges gave the loser low points.  To me, this indicates that the judges, in spite of their very different backgrounds and tastes, were basically on the same page in choosing their favorite, and their least favorite, amber ale.


And here, without further ado, are the results of their judgment:

Seventh Place:
Alexander Ambree -- This is a classic amber ale from the Alexander Brewery in Emek Hefer, with 5.7% alcohol by volume.  Several of the judges mentioned that they enjoyed this beer in the past either by itself or with food, but that in the head-to-head competition with other ambers, it just didn't make the grade.

Sixth Place:
Katzra Amber -- From the Arava Brewery in Tzukim, located in the Arava Valley of the Negev Desert.  "Katzra" is a stream in the Arava.  This is a small, local brewery which also makes a dark ale and a blond ale.  The alcoholic content of the amber is 4.6%.

Fifth Place:
Jem's Amber Ale -- From the Jem's Beer Factory in Petach Tikva.  The bottle label says that this is a 5.3% ABV "English Ale" made with Carafa malts.

Fourth Place:
Chuck's Amber Ale -- From Chuck's Brewery in Ra'anana, although the beer is brewed at the Mosco Brewery facilities on Moshav Zanuach.  Chuck's is a small brewery of four partners which has recently increased its commercial activities.  5.3% ABV.

Third Place:
Amber Beer -- From the Vilde Chaya Brewery.  Vilde Chaya beer is made at the Mosco Brewery facilities on Moshav Zanuach by Itai Tzuker of Kibbutz Gvat and Hagai Gelman of Kiryat Tivon.  Their impressive showing in this tasting is indeed a compliment to Itai and Hagai's talent.  In addition to their Amber Ale (5.2% ABV), Vilde Chaya also makes a wheat beer, a stout, and a beet(!) beer.

Second Place:
Bazelet Amber Ale -- From the Golan Brewery in Katzrin.  At 6.4% ABV, this was the strongest amber ale in our tasting.

First Place:
Amber Ale -- From the Negev Brewery in Kiryat Gat.  Our winner was 11 points above number two.  The judges, while not being unanimous in their praise, had several enthusiastic comments for this beer.  Alcohol by volume is a low 4.9%.

Congratulations to the folks at Negev Brewery, led by Sagiv Karlboim, for their first-place amber ale.

Our warm thanks to all of the brewers represented in the Tasting Panel for contributing their beers.  They came from near and far to put the amber ales on our table.

Thanks also to my wife Trudy for helping to make the Tasting Panel a culinary and social success.  She became a "beer maiden" for the night, making sure the beer was served cold and the snacks were plentiful.

And extra-special thanks to Judge Mike Horton, the photographic magician who immortalized our Tasting Panel and transported us to exquisite realms in Budapest.
Posted by Doug Greener at Sunday, August 23, 2015