I just found out about the Ashdod Beer Festival, which will be held August 19-20 at the Mei-Ami Beach.  The only thing I was able to learn from the website and phone number was that this is the fifth Ashdod Beer Festival (though I was completely unaware of previous ones) and that tickets cost 35 shekels and do not include tastings.  The festival opens at 8:30 and there are big-name entertainers on both nights.  I couldn't find out which breweries will be represented nor how many beers will be available.

If you live in the area and would like to attend, the phone number for tickets is 08-854-5833 and the municipal office for these events is 08-854-5141.  Maybe you'll have better luck getting information than I did.

By the way, the name of the beach, Mei-Ami, means "waters of my people" in Hebrew.  There are folks out there who believe that the name Miami (as in Florida) comes from the same source.

Just a reminder that the BEERS 2015 Festival in Tel Aviv will be held this coming Tuesday, Wednesday and Thursday evenings (August 11-13) at the Train Station (HaTachana) in Neveh Tzedek.  Doors open at 6:00 pm.  The entrance fee is 70 shekels, which includes the first five tastings.  After that, you can buy five additional tasting coupons for 30 shekels.

According to information on the BEERS website, if you print out and bring the coupon below (or display it on your smartphone), the entrance fee is reduced to 50 shekels.  What are you waiting for? 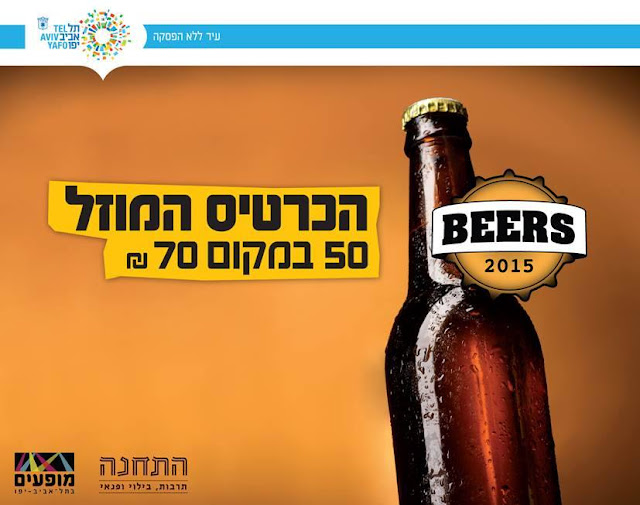 There are two beer festivals going on over August 26-27.  One of them is in Haifa (held on the Agritech Grounds, near the Convention Center) where entrance is free.  Since it is sponsored by Goldstar and Maccabee Beer, don't expect any Israeli craft breweries to be there -- but it should be a lot of fun anyway.

The other one is the 11th "Ir Habira" Jerusalem Beer Festival, held in Independence Park (Gan HaAtzmaut).  Entrance costs 35-45 shekels, and does not include any beer tasting.  There will be food and entertainment, and if it maintains the level of past Jerusalem festivals, a great time should be had by all.

Regarding the Mateh Yehuda Rustic Beer Festival, I have been informed by Chani Ben-Yehuda, who is responsible for festivals and events at the Tzlilei Hakesem company,   which organizers these events, that it doesn't appear as if there will be a festival this year.  This is a real shame, since the atmosphere, the music, the beer and the food at these festivals were always first-rate.  As they used to say in Brooklyn, "Wait'll next year!"
Posted by Doug Greener at Monday, August 10, 2015