Some impressions from the BEERS 2014 Exhibit in Tel Aviv

The BEERS 2014 Exhibit in Tel Aviv (September 9-11) was and will be the biggest beer festival this year.  For the first time in four years, BEERS was held outdoors in the summer instead of indoors in the winter.  This was a great idea and it turned it from a "beer exhibit" to a real "beer festival"  -- even though they kept the old name.

They advertised that over 200 beers were available.  I neglected to count how many I tried, but you know me, too polite to offend anybody by saying "no."

It was great fun, an uplifting social experience and highly educational.

I actually went twice -- on the first night when it was open only to "the trade" (although there were probably hundreds who were not in "the trade" who found their way in), and the last night just to kick back with friends and to meet the home-brewers, who were not allowed to display on the first night.  Unfortunately, I was in my working mode, with pad and camera, on both nights.

Here are some random impressions:


The India pale ale craze
is getting to Israel.

A healthy number of craft breweries -- established, micro- and home-based -- were unveiling their new IPAs.  As I wrote about Malka Brewery's new Hindi IPA (see here), Israeli tastes are moving in the direction of hoppier, bitterer and stronger beers.  Works for me. 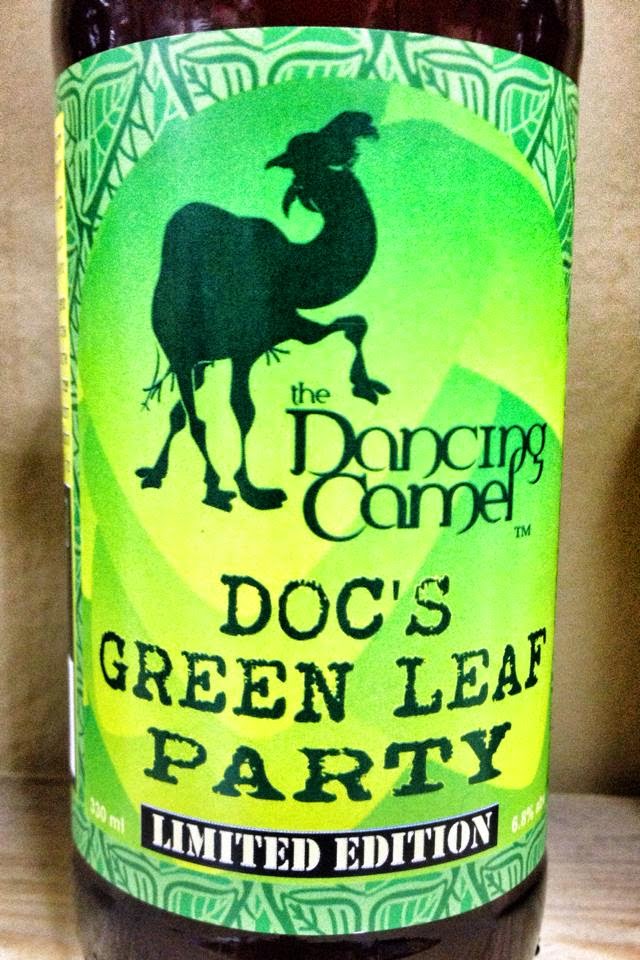 Take for example, Dancing Camel's Doc's Green Leaf Party IPA, named in memory of Don Morris, who was a college professor from California and a friend and business associate of owner David Cohen.  Dr. Morris passed away last month, and Dancing Camel is donating all the profits from sale of the beer to the Cancer Research Institute at Sheba Hospital, Tel Hashomer.

It's a beautifully refreshing IPA, full of citrus inducing hops from California and Australia.  The hop taste is fruity and suitably bitter, and the ABV is a hefty 6.8%.  Unfortunately, Doc's Green Leaf Party IPA was bottled in a very limited edition for sale at the Dancing Camel's brewery and bar in Tel Aviv, and perhaps at a few select stores. 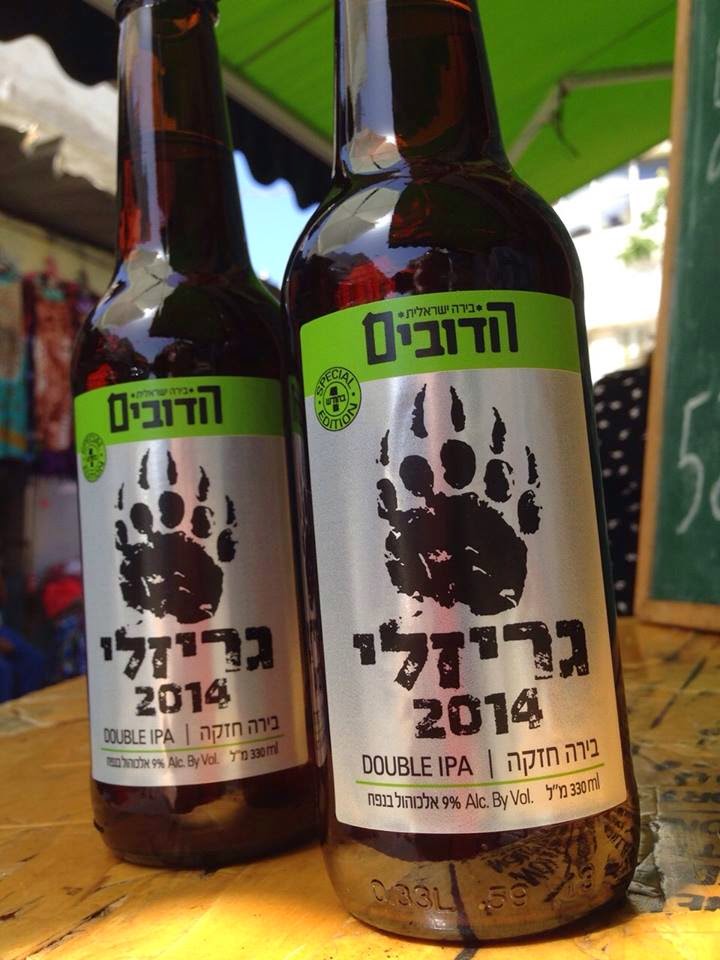 HaDubim Brewery in Even Yehuda premiered their Grizzly Double IPA.  At 9% ABV, this is an ultra-hopped strong beer in the so-called West Coast IPA style.  It's big and balanced; you can't miss the sweety malt flavor alongside the hops, which are more fruity and citrusy.  If you can't get enough of hops, get Grizzly.

From the Golan Brewery (Bazelet) comes their new 2014 Summer Pale Ale (marketed as an IPA) in the Og seasonal beer series.  The Og series are noticeable by their squat bottles.  This is one beautiful, fresh beer.  Although it's lower in alcohol than other IPAs (only 4.5% ABV), it has a big hop taste with strong fruit and citrus notes.  Moderately bitter -- probably what Israeli taste buds want.  I've always found the Og seasonal beers to be preferable to Bazelet's regular series, and this is no exception.  Buy this baby while it's still on the shelves.  Production ended with the summer. 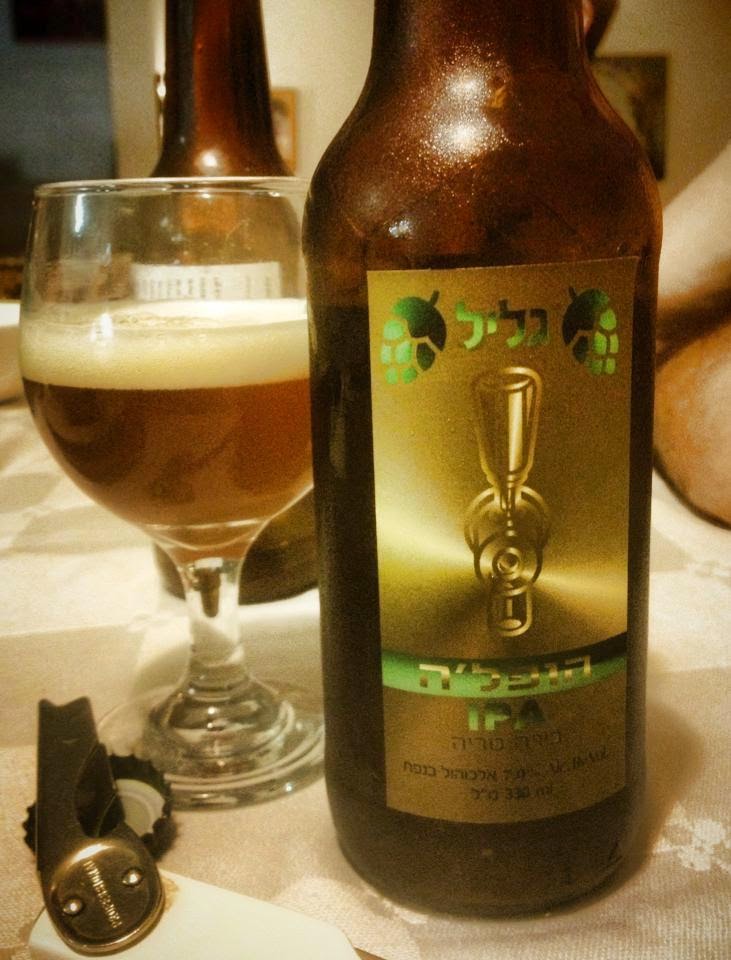 Since BEERS 2014 was the biggest beerfest in Israel, drawing the largest crowds and getting the splashiest publicity, some breweries used the occasion to introduce new brews.

We already mentioned the new IPAs.  But there was also, for example, Emek Ha'ela's (Srigim Brewery on Moshav Srigim) 11% Belgian Tripel.  They already make a 9.2% Belgian Tripel, but this new 11% ups the alcohol and the flavor.  It was available only on tap.  I found it sweet and fruity, like an abbey beer should be, and very welcome after drinking the bitter and astringent IPAs.

Bryan Meadan of Meadan Brewery from Har Halutz was serving his new Humus Beer, a non-gluten beer made from malted humus and silan (date honey).  He already makes a non-gluten beer from buckwheat (see here), but I found his Humus Beer even better.  It tastes like an excellent pale ale with a touch of sour.  Meadan malts his own humus, because I doubt if anybody else in the world does.

From the Dictator (Mivshelet Ha'am in Even Yehuda) comes Laphroaig Irish Red, made with Laphroaig single malt whisky from Scotland.  This gives the beer a peaty and smoky taste.  Although this nearly overpowers any other malt and sweet flavors that may be there, I found it a successful blend.  Some of the smoked beers I've tried tasted like wet ashtrays, but the Dictator's Laphroaig gets it just right.  "Where's the beer?" you might ask.  It's there; it's just different.  And at 6.1% ABV, this is clearly a whisky-flavored beer, not beer-flavored whisky.


While not actually a new beer, Beresheet from the Negev Brewery in Kiryat Gat was made available to the general public for the first time at the festival.  Until now, it was only available to guests at the luxurious Beresheet Hotel in the Negev town of Mitzpe Ramon.  In fact, it was made in partnership with the hotel to be suitable for the desert climate (see my older post here).  Since I will probably never be staying at the hotel, this was my only chance to taste Negev Beresheet beer.  I found it to be light and delicate (only 4.7% alcohol) as the desert air it reflects.  It has a gentle hop citrus fruityness which is hardly bitter.  Drinking Beresheet is a good way to keep hydrated when you're in the desert.

Just like in the earlier Jerusalem Beer Festival, there were several home-brewers and mini-brewers who are doing some interesting things with beer.  I'll mention a few just to get them on the record.  I hope that very soon, I'll be able to give them more attention.  That's what I'm here for.

Forty-eight
The beer is named in honor of the year of Israel's independence.  Their slogan is "Beer of the Brave."  Brewmaster Lior Hertz makes a Blond Ale and an Amber Ale at Mivshelet Ha'am contract brewery in Even Yehuda.

Emek Hama'ayanot
Brewed at Mivshelet Ha'am for the Chaim's Cellar pub on Kibbutz Maoz Chaim in the Ma'ayanot Valley east of Beit Shean.  A 5% pale ale.

Shenkin -- a brewpub in Ra'anana.
I tasted their American pale ale.

The Stranger
A Honey Ale made by Gordon Sutker in the Mosco Brewery, Moshav Zanoach.  I like the attention Sutker pays to branding and packaging.  The beer is distinctive too.

Talman
Avinoam Talman brews his sweet and malty 5% Old Ale at the Mivshelet Ha'am.  Talman also devotes time and thought to branding and marketing his beer.

Achuzat Bayit
They were introducing their new dark lager, a malty and sweet beer known as Bialik.  Owner Danny Schnur told me that they also make three other lagers: Rothschild, a light pilsner; Dizengoff, a dark double bock; and Allenby, a Bavarian red.  With Schnur living in Nes Ziona, the brewmaster Ro'i in Modi'in, and the brewery in Ashdod, Achuzat Bayit is a true "national" company.

Beerun
Run Asulin was offering two beers: Blue Moon Clone, a subdued wheat beer with a distinct sweet and sour taste I found much better than the original.  (Run was surprised to hear that the Blue Moon Brewery in the U.S. had been bought by Miller-Coors.)  The other was Born in the U.S.A., a light American pale ale full of spice and citrus flavors.

Boaz Lanner poured me his American Pale Ale and took the time to explain why it was not an India pale ale.  Sorry, I was unconvinced.  It might have been brewed differently, but this had all the elements of a quite excellent IPA, including flavorful hops, 5.8% ABV, and bitterness in the range of 44-45 IBUs.  I also tasted Lanner's Brown Ale, very malty with real earthy elements.  This is a good representative of a brown ale, not very many of which are brewed in Israel.

Baron's
Lior Degabli's home-brewery in Hod Hasharon.  I drank their Hibiscus Saison, a beer made with hibiscus tea, lemongrass, black pepper, rose hips and honey.  The result: a smorgasbord of flavors, including hops, citrus and sour fruits.  This Belgian-style saison pours out a lovely red (which I could see even in the darkness of the festival) and is 6.5% alcohol.  Since the hour was getting late and I was sampling too many beers, I took bottles of Baron's Cream Ale, American Rye Beer and American Pale Ale to try at home.

Beeryon
The home-brewery of Michael Dubinsky, Matan Drory and Oren Ben-Shalom in Rosh Ha'ayin.  I tasted their full-bodied porter (also not too many brewed in Israel) which is made with coffee.  I also detected a taste of licorice.  Beeryon also makes a wheat beer, a Belgian-style beer and an English stout.

Joya
Adam Souriano brews his beers in Yehud.  I tried his new American Pale Ale and found it, once again, right up there with the IPAs, with a touch of vanilla in there.  Souriano won two awards in the Longshot home-brewers competition in Jerusalem.

This beer blogging really
does get you recognized!

Somewhere among the home-brewers' stands (which were located near the ear-splitting band), an American-born young lady came up to me and said, "You're Doug Greener, right?  I read your blog all the time."

So I blushed and we chatted for a while.  [Do beer bloggers have groupies?  Do old beer bloggers have groupies?]  Turns out she has been living in Israel for eight years, works in hi-tech and loves beer.  [Why else would she be attending a beer festival?]  I didn't think of writing down her name.  I didn't think of taking a picture.  I really have to adapt a more professional mindset when I'm on assignment.

So we say good-bye and I take a few steps and this couple walk up to me positively gushing.  "Oh, you're Doug Greener," says the wife.  "We recognize you.  We really love your beer blog."

Is this really happening?

This time I do write but I don't think of taking a picture.  Marilyn and Andrew Eagles are from Vancouver, but live in Israel for extended periods.  They are great beer lovers and have been turned on to Israeli craft beers by yours truly.  "We used to think the only Israeli beers were Goldstar and Maccabee," says Marilyn.  "Now we tell all of our friends about these wonderful Israeli boutique beers."

My kind of people.  My kind of beer festival.
Posted by Doug Greener at Wednesday, October 01, 2014