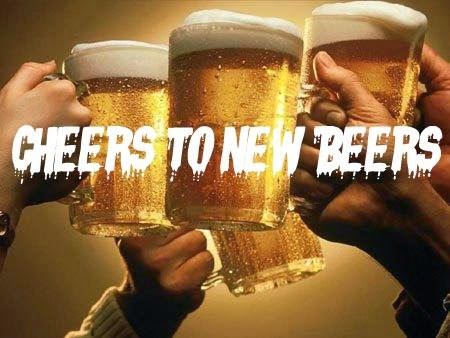 In advertising, as in other agency-type offices, "new business" is like lifeblood.  Now, servicing veteran clients is no less important, but it's the new business that refreshes and motivates the staff and gets the creative juices flowing.

For beer bloggers, of course, it's the new beers that give us a kick.  I may not be able to keep up with all the new Israeli craft beers -- people have to tell me about them or I have to see them -- but I'll do my best.

Here are four new beers which have come to my attention:

Mexico 70 from Herzl Beer in Jerusalem. 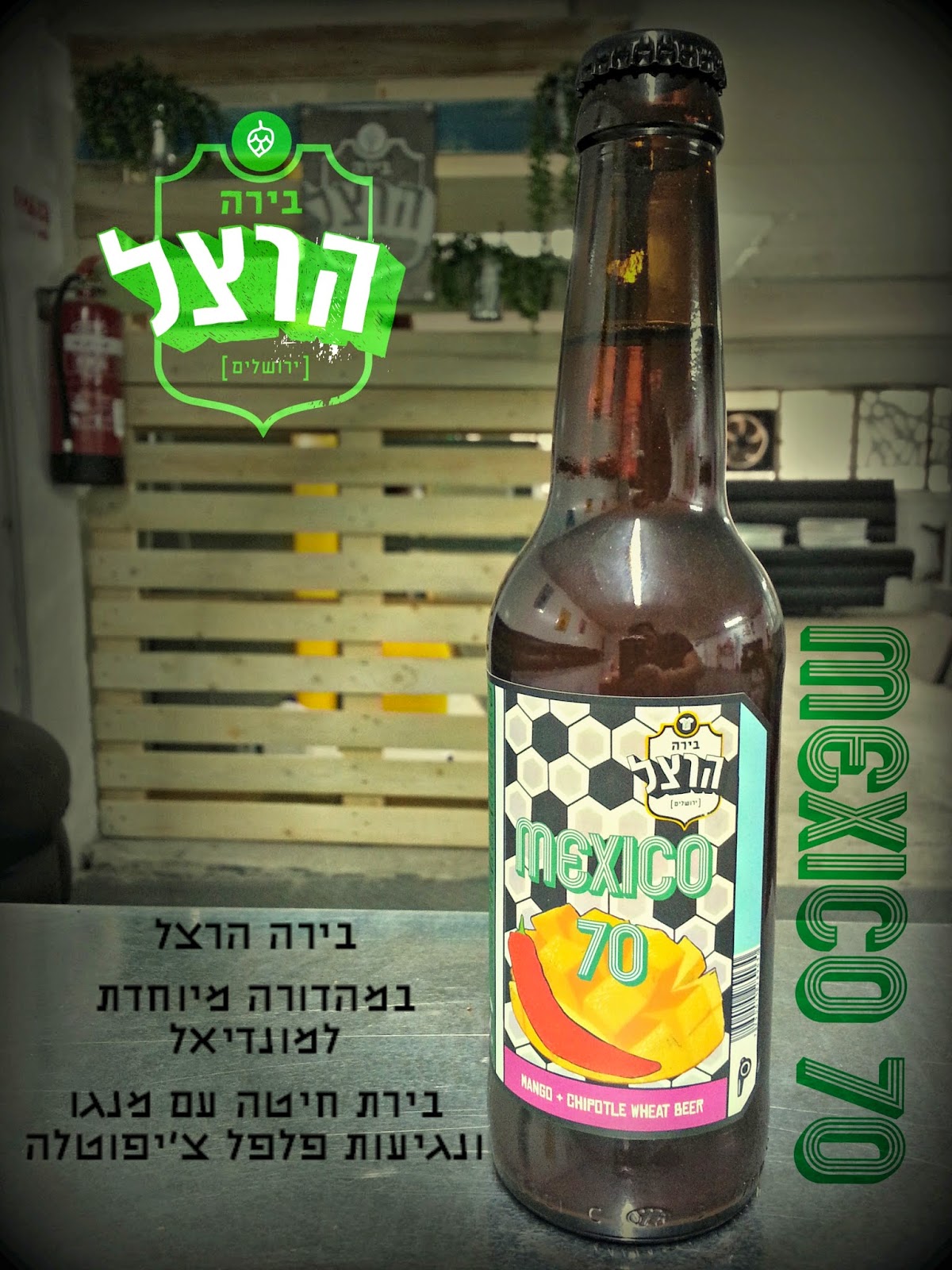 Maor Helfman and Itai Gutman brewed only 840 bottles of this commemorative beer.  What does it commemorate, you ask?  The only place and year that Israel took part in the Mondial World Cup Soccer Tournament.  Yes, that would be in Mexico City in 1970, long before Maor and Itai were born.

Israel will be a competitor again someday, maybe, but in the meantime, we have this interesting wheat ale (6% ABV), which is brewed with mango and chipotle pepper in honor of Mexico.  It's a pleasant cloudy orange color, and the wheaty, spicy aroma is quite typical of wheat beer.  The flavor is sweet and fruity (is that the mango speaking up?), but it's the pepper that makes this beer distinctive.  It doesn't burn your mouth, but you can feel the heat in your throat as the swallow goes down.  An interesting, enjoyable brew.  I look forward to more innovation from the Herzl Beer boys. 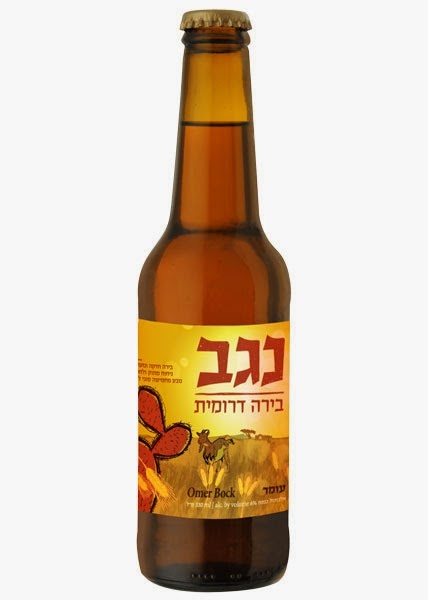 Negev has come out with a dark bock lager beer in the tradition of the maibocks, typically brewed in the springtime for drinking right after.  Maibocks are known for their complex flavors, full bodies and high alcohol content.  To give Omer Bock a local, Jewish connection, it is brewed and aged over the seven week "omer" period following Passover, as I was informed by Sagiv Karlboim, the head of Negev Brewery.

This was the second year that Negev produced an Omer Bock beer, in limited quantities, so there may not be too many more bottles left in stores.

Omer Bock pours out a dark brown color with a little beige head.  You smell caramel and brown sugar.  The taste is a good strong bock with dark fruits and a chutzpadik vanilla.  The aftertaste remains strong, with the hefty 6.6% alcohol very noticeable.  I and my drinking partner Moshe enjoyed this beer, especially since it was a cool Jerusalem evening. 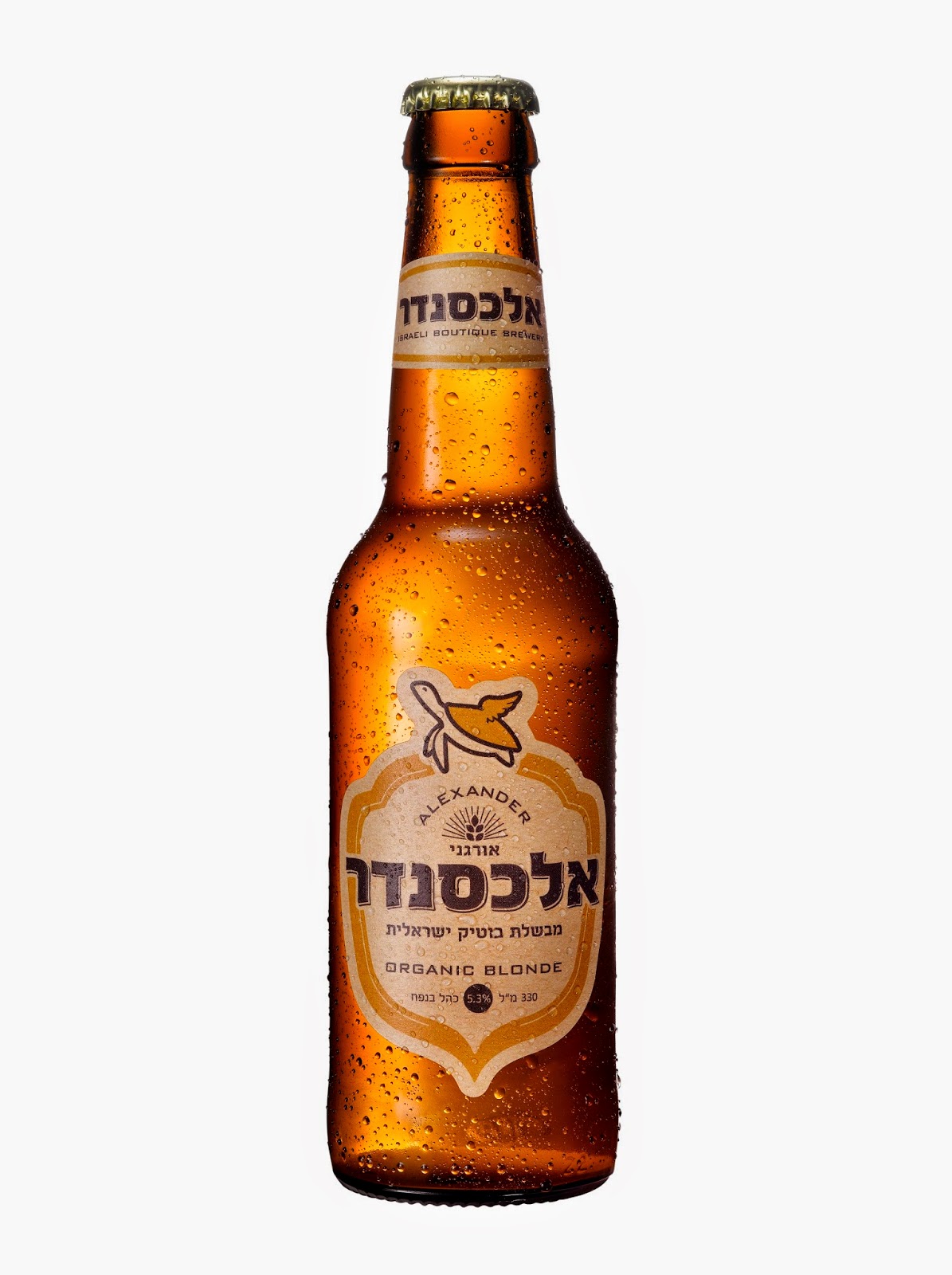 Alexander already brews a blonde ale, so why bring out an organic version?  The way to find out is to taste -- and then compare.  So we did.

The Organic Blonde is made with organic barley malt and hops.  The color is very pale yellow and the first aromas I smelled were grass, lemon and delicate hops.  Not surprisingly, the lemons stayed in the taste, and they added a pleasant sourness.  There was also a light bitterness in the taste and the dry aftertaste.  Moshe called this an "exact beer," meaning it's well balanced; nothing is exaggerated; there is harmony between the hops and the malt; "it feels right."

After drinking the Organic, we found the regular Alexander Blonde much blander.  (Does this make it a "bland blonde"?)  At 5.3% ABV, it's the same strength as the Organic, just as pale, but cloudier.  The taste was sweeter, without the hop bitterness.  Had we had this beer on its own, it might have been a very enjoyable experience with light food or snacks.  But after the Organic, we missed the fuller flavors and found it too mild.

The Organic Blonde was definitely our choice.

Mosco brewers Amir Lev and Yaron Moscovich first brewed a wheat beer (hefeweizen) for Yaron's wedding around six months ago.  It was so well received that they took it public, adding it to their Mosco Blond ale and Mosco Red ale.

As wheat beers go, it is very mild in taste.  You don't get the typical banana and clove tastes of most wheats, but rather sweet fruits, caramel and yeast.  And yet, it is stronger than most other wheat beers (5.9% ABV) and has a heavier body.  Perhaps because it was so different, and because I am not a big fan of hefeweizens, this was a beer that I really enjoyed.

Mosco's Wheat Mountain Beer came to my attention a few months ago during the Shavuot holiday.  I wanted to try to pair some beers with the sweet, cheesy desserts that are eaten during that holiday.  I chose a selection of  stout, porter, Belgian trippel, and wheat beers.  So, while others were drinking coffee with their cheese cake and blintzes and grasshopper pie, I and a small groups of brewheads were drinking beer.

The hands-down favorite was the Mosco Wheat Beer.  The sweetness of the beer and its fruity flavors complemented the creamy desserts very well.  The stronger tasting beers were much less successful.

As I continue my search for new Israeli beers, I call upon my faithful readers to give me a heads-up if they hear of any.