Do you remember Asif Beer?  It was a standard fixture at almost every beer festival for many years and was readily available in liquor stores.  It had a catchy label of an old-time sower of seeds against a background of a swaying field of barley.

I enjoyed their four regular beers and I also appreciated their names:

Surprising Dark Haired Female (there's no word for that in English, is there?) -- a smoky porter. 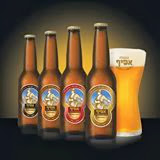 As I was going through my contacts, I noticed that the Asif Brewery Facebook page hadn't been updated for about two years.  They had been using that in lieu of a website.

I called the owner and brewmaster, Shimon Osher, at Moshav Ramot Naftali in the Upper Galilee, and he confirmed: Asif has not been brewing beer commercially for more than a year.  Shimon has been brewing at home for his own family and neighbors.  His medium-term plans are to open a pub and to brew beer for the moshav and the region.

When I told him that I enjoyed Asif Beer and would like to see it back, he said, "So would we."